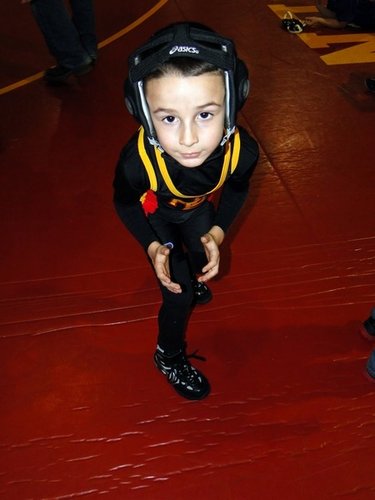 Township grade schooler Jerzey Ryan, age 6, continues to excel in the world of youth wrestling, recently concluding his season with a second-place finish in a prestigious national competition.

‘War at the Shore’

Ryan participated in the “War at the Shore,” an annual wrestling tournament held at the Wildwood Convention Center. Wrestlers from all over the country came to compete for the title of national champion in weight and age divisions from 6 years old to high school age.
Ryan competed against athletes from three states in his 44-lb. weight class, wrestling seven times and winning six matches. His only defeat was to the eventual tournament champion. Though Ryan lost early on, he was able to battle back and clinch the silver medal.

“In certain national tournaments there is a chance for wrestlers to wrestle the loser of the finals for the title of ‘true second place,’ ” said his mother, Diana Mompellier. “Jerzey wrestled back and took the place.”
The gritty performance made him the youngest wrestler from North Bergen to win second place in a national tournament, she said. Ryan had already been the youngest from the township to win first place in a state championship.
Rob Ryan, Jerzey’s father, was not expecting his son to do as well as he did at Wildwood, because of the top-notch level of talent.

Ryan said his son was “hooked” on the sport from age 4, and made his dad sign him up as soon as he turned 5 and could wrestle. He said his son’s discipline and mental toughness have served him well in the sport.
“It’s like a physical chess match,” Ryan said. “They’re setting up moves; setting up moves to set up a mistake.”
The 6 year old started at the North Bergen Recreation, where there is a “really good program,” according to his father. Ryan’s parents were soon told he could compete at the next level with extra coaching. Ryan took his son to coach Mike Foca and the Red Nose Wrestling School in Cresskill, and the rest is history.
More than just winning athletic accolades, wrestling has helped Ryan’s son become a rounder person, his father said.
“Jerzey’s just a better kid for it,” Ryan said. “He’s got a better confidence and discipline about him.”

Mompellier said the tournament was the first in the South Jersey seaside community since Super Storm Sandy, and it was nice to see the town rebounding.
“While many buildings and businesses were damaged and still shuttered, it was incredible to see the town of Wildwood filled with wrestlers and their families,” Mompellier said.
Joseph Passantino may be reached at JoePass@hudsonreporter.com.