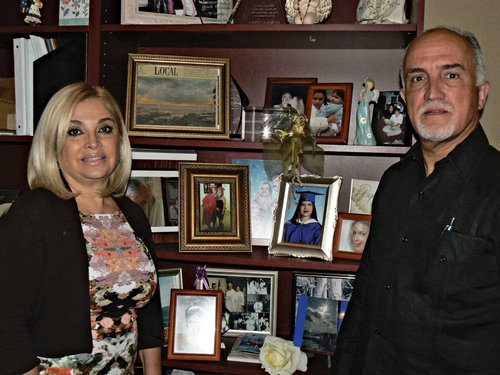 Eight years have passed, but it doesn’t get any easier.
Tears rolled down from the eyes of Jorge Verea, M.D., as he said there has not been a single day since June 20, 2005 that he has not thought of his daughter, Rebeka, killed in a tragic car accident in North Bergen hours after her graduation from Cliffside Park High School. In the next town, West New York, officials plan to commemorate her life toward the end of this week near Memorial High School. Dr. Verea has his medical practice in that town.
Verea and his wife, Lourdes, say the wounds opened that day will never heal.
“There have been a lot of tears over the last eight years,” she said. “It’s a terrible pain. Losing a son or a daughter, you are never, ever again the same person.”

Shortly after her high school graduation eight years ago, Rebeka, 18, decided to take a ride with a friend.
She was the passenger in a car driven by Alexis Torres, a 19-year-old former North Bergen resident and graduate of North Bergen High School. The car collided with a tractor trailer, severing the roof of the car and killing Verea instantly. The crash occurred near West Side Avenue and 74th Street.
“My daughter told me she’d see me in another 20 minutes, half hour,” Lourdes said. “I never saw her again.”

The Vereas turned tragedy into action. Only days after their daughter’s death, they created the Rebeka Verea Foundation, not only to pay tribute to their lost child, but also to raise awareness and educate young people on the dangers of reckless driving. “Say Yes to Life, Drive Responsibly” has been the organization’s credo. And many young people are listening.
The foundation hosts an educational symposium each year in April for high school-age children from nearly two dozen schools in Hudson and Bergen counties. For many of the students attending, it has become a life changer. During the event, teachers hand out a questionnaire seeking feedback. A response from four years ago particularly struck Lourdes.

_____________
“We are trying to raise awareness about an epidemic.” – Dr. Jorge Verea
____________
“I learned many things, but my main insight was to make the correct decisions, and think twice,” wrote a Teaneck High School student. “Your story has inspired me to think twice about my decisions. Your story has greatly impacted my life.”

The annual symposium is held in the spring, just before proms and graduations, because it has more significance, Mrs. Verea said. In fact, her group is working toward educating teenagers about the perils of driving in their early high school years.
Teenagers are the only age group in the United States whose life expectancy has either reached a plateau or declined in recent years. Motor vehicle accidents are the number one cause of death amongst this age group, according to the New Jersey Division of Highway Safety.
Statistics show that 16 children between 16 and 20 die every day in the United States in teen-driven vehicles.
“We are trying to raise awareness about an epidemic,” said Dr. Verea.
Verea was the chief medical officer for the North Hudson Community Action Corporation for 26 years, and is currently their director of external affairs. He is a renowned community health advocate.
His and his wife’s foundation has raised tens of thousands of dollars and donated it to programs that work to prevent their type of tragedy from happening to others. One of the many beneficiaries was North Bergen High School’s Project Graduation. Five kilometer runs and pancake breakfasts have been among the foundation’s sponsored events.

What could have been

The Vereas continue to mourn the loss of their second child, and they also mourn what could have been. Rebeka had told them she wanted to become successful professionally, get married, and become a mother. But she will never enjoy those watershed moments, nor will they.
“I reflect on what she would have done,” Dr. Verea said. “I think her legacy has accomplished quite a bit. I think it is our responsibility to make sure that her death was not in vain.”
Some things in life give Lourdes hope, she said. One of them is her eldest daughter, Vickie Hall, 32, who somehow has carried on after the death of her younger sister. Another is her granddaughter, Harper Rebeka Hall, who not only carries her late daughter’s name, but also resembles her as well.

On Thursday, June 20, West New York Mayor Felix Roque and the town’s Board of Commissioners will commemorate Rebeka’s life and memory with a ceremony at 9 a.m. on Rebeka Verea Way, 56th Street and Park Avenue in West New York, in front of Memorial High School.
For more information about the event, call the West New York Department of Public Affairs at (201) 295-5101 or email gpope@westnewyorknj.org.
For more information about the Rebeka Verea Foundation, call (201) 758-9600, visit its website, www.rebekavereafoundation.org, write 148 65th St., West New York, NJ 07093, or email Lourdes@rebekavereafoundation.org.