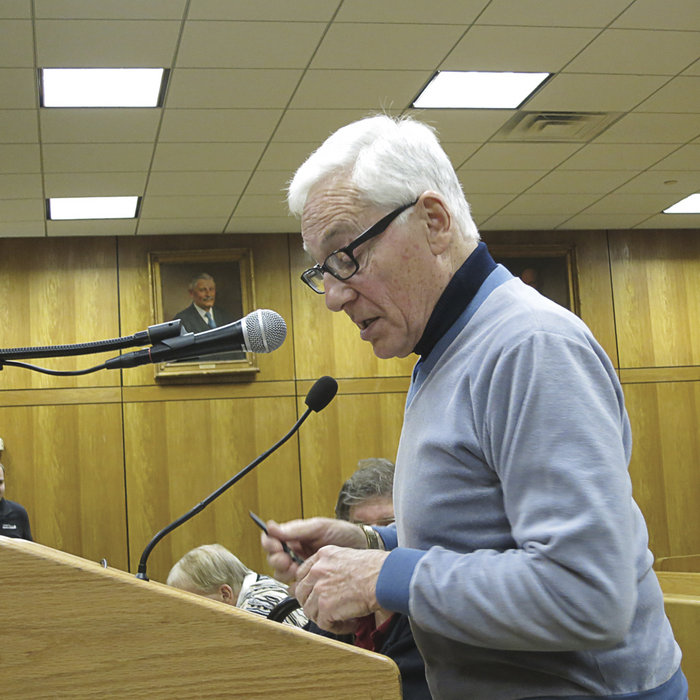 As gun control measures are discussed nationally at both the federal and state level, the issue has remained a central topic locally, three months after a gunman took the lives of 20 innocent children and 6 adults in a Newtown, Conn. elementary school.

Resident Don Evanson has raised the issue many times in recent Secaucus Town Council meetings to reiterate his proposals for stricter local gun control measures. He has suggested requiring that gun owners store all high-capacity magazine weapons in a secure location overseen by a local enforcement official, and that the weapons could be checked out with proper identification and proof of a permit.
Secaucus Mayor Michael Gonnelli told Evanson in a past meeting that he planned to ask the town attorney to look into his proposals.
However, at Tuesday’s Council meeting, one resident was not pleased with Evanson’s suggestion to store high-capacity magazines.

Aiello spoke at length about his work related to auto crime, drug enforcement, and against prostitution.
He procured his weapon at the suggestion of a detective when he found out that someone was out to kill him. The individual backed off once he knew Aiello was armed, according to his account. Aiello also gave examples of a moment when he was armed while he was in charge of security for a property.
“Apparently you don’t need to show your weapon to have an effect on bad guys,” noted Aiello.
“In respect to Don, I know he is well-intended, but to tell me that I have to have my gun locked up in a warehouse somewhere, where I can’t get it when someone is breaking into my door…” said Aiello.
Then he acted out a scenario of calling “the warehouse.” “’Yes, this is the warehouse…Yeah, I wonder if you can deliver my gun to me – I kind of need it right now…could you put a rush on that, someone is breaking in my door.”
He then asked the mayor and council members, “What good is my pistol going to do me if it is locked in a warehouse somewhere?”

“I don’t want this to be a forum to debate what Don said and what we’ve done,” said Gonnelli in response to Aiello. Gonnelli last month joined Mayors Against Illegal Guns, which is a coalition of over 800 mayors nationwide that shares best practices, develops policies, and supports legislation at all levels to help law enforcement target illegal guns.
Secaucus officials also passed a resolution in mid-February to support the Fix Gun Checks Act, which calls on the federal government to reduce gun violence in America and help prevent future mass shootings by requiring a background check for every gun sale, among other measures.
Gonnelli stressed to Aiello that the town supports a ban on illegal guns.
He said he understood Aiello’s position and appreciated his comments.

“We have to deal with the issue of protecting the children,” said Aiello. He suggested that the town put armed guards at the schools.
“We’ve done that,” said Gonnelli. He said the town created a different zone just for the schools, which a police officer patrols. The town also plans to train park patrol, crossing guards, bus drivers, aides, and other town employees to report any suspicious activity.
“Anyone that is out there with eyes to be on alert and to expect the unexpected,” said Gonnelli referring to the training. “They could be a first line of defense that no one has really activated yet…we have taken every step in this town working directly with the board of education to ensure to the best of our ability that something like [Sandy Hook Elementary] doesn’t happen in Secaucus.”
Aiello ended his statements by asking the mayor and council to put together a board on the matter, which he wants to serve on, to offer a gun owner’s perspective.