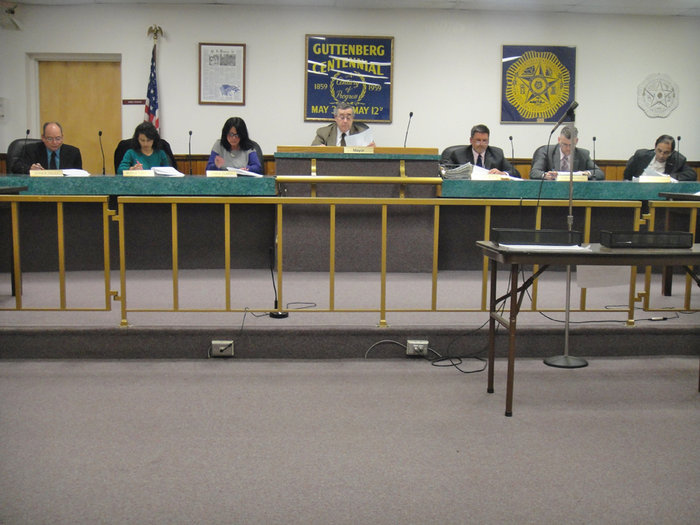 Guttenberg’s Town Council introduced a $17.28 million 2013 calendar year budget on Monday, which will cause a mere half percent increase in municipal taxes.
Residents pay an overall tax amount that consists of taxes for the county, school system, and town. The $17 budget only affects the municipal tax portion.
“It would be limiting any increase in [the] municipal tax to about a half percent, which is lowest we’ve done in a number of years,” said Mayor Gerald Drasheff after the meeting.
The budget will be up for a public hearing and final vote on March 25.
“If we hear something from the public that gives us pause, we may need to go back and look at the [budget],” said Drasheff. “Then we may or may not adjust the budget.”
The budget is up slightly from last year’s approved budget of $17.2 million.

Reflected in the budget

Guttenberg has been working on improvements such as road paving and a joint venture with the Township of North Bergen of the Waterfront Park.
The town also prides itself on having their municipal employees tackle dual positions in order to cut costs or part-time ones.
“We’ve been prudent in terms of hiring people,” Drasheff said. “We try to use less people if we can. We use part-time people whenever we can. We’ve been building up our capital reserve over the years so now we have cash on hand to fund [projects], which we weren’t able to do in the past.”
Contracts with police and the Department of Public Works are on the brink of expiring this year, which may change the budget.

_____________
“[We are] limiting any increase in next year’s municipal tax to about a half percent.” – Mayor Gerald Drasheff
____________
At the same meeting, the council introduced an ordinance to allow them to slightly exceed state limits for a spending increase. The ordinance stated that the Town Council determined that only a 1.5 percent increase in the budget, or $157,531, was permitted under the Local Government Cap Law. However, the final appropriations will represent an increase of 3.5 percent, or $367,572.

An ordinance was adopted for $120,000 of improvements to be made to 68th Street, funded by federal grants. The total cost of the improvement project will be $370,000.
An ordinance was adopted about taxi cab price limits. Owners or drivers of cabs can add surcharges for tolls and gasoline, within reason. The in-town rate for six blocks or less is $4.50 while the maximum charge for 70 to 80 clocks is $13.
The out-of-town rates vary. Secaucus rates have a maximum of $20 while a charge to go to JFK Airport has a max of $70.
A resolution was approved for the appointment of crossing guards for the current school term of ’12 to ’13 and will expire June 30. The following were appointed as school crossing guards: Margaret Smith; Jose Munguia; Catherine Kazlauskas; Severino Garcia; Julia Midence; Mattie Lue Stays; Samuel Contino; Ana Escobar; Brian Dee; Ruben Bonilla, and Delmis Carcamo as a substitute.
A resolution was passed to appoint a student, Joseph Morrell, to a part-time position with the work study program, which began Feb. 6 and will end June 30. His salary will be $7.25 per hour and is not to exceed 19.50 hours a week.
A resolution was passed for the two Jugs Jr. Pitching Machines that are being authorized for an upcoming auction that will take place on March 12 at 11 a.m. in Town Hall.
Another resolution was passed for five town vehicles that are authorized for sale during the March 12 auction.
Sergeant Mark DePew was appointed permanently to the Guttenberg Police Department and completed his probationary period as of Dec. 31, 2012. His appointment was effective Jan. 1.
A contract of $7,170 was awarded to Pat Scanlan Landscaping Company, the lowest bidder, for landscaping services for the public parks and grounds.
A resolution was passed to appoint Nicholas Rivelli as the permanent part-time code enforcement employee. His appointment began on Feb. 26 and his salary will not exceed 19.50 hours weekly.