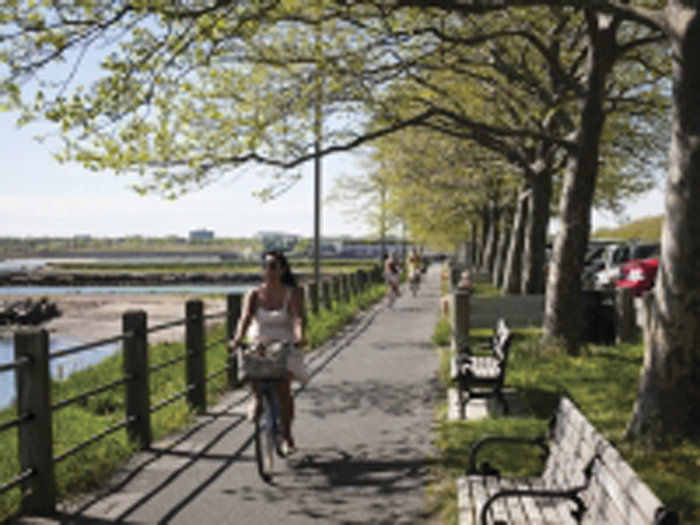 Biking advocacy groups are putting together a map of a 50-mile route of bike-friendly pathways and roads around the region. Harbor Ring is a Transportation Alternatives Project that will encircle New York Harbor and pass through several towns in Hudson County. The 50-mile route will connect Manhattan, Brooklyn, Staten Island, Bayonne, Jersey City, and Hoboken.
The Harbor Ring project began in July 2011 as a vision of a premier regional bike/walkway. The Harbor Ring Committee is comprised of Paco Abraham, Paul Gertner, Mike Lydon and Meredith Sladek.
The Harbor Ring will incorporate 28 miles of existing bike pathways and greenways that include the Hudson River Waterfront Walkway in New Jersey, the pathway over the Bayonne Bridge, and the Hudson River Greenway in Manhattan, and incorporates access to over 48 parks and regional destinations. Some of the historical landmarks, parks and regional destinations the Harbor Ring passes through in Hudson County are the Bayonne Bridge, Bayonne Park and Liberty State Park. The route also includes more than 20 miles of bicycle-friendly streets which have rail, bus and ferry transit connections.
“There is so much Hudson County residents can look forward to from learning about and traveling the Harbor Ring – half of the Harbor Ring is in their backyards,” said Staten Island Volunteer Committee Chair Development Coordinator Meredith Sladek of Transportation Alternatives. “Besides facilitating active transportation and recreational opportunities for health/fitness enthusiasts, we also want to draw attention to neighborhood businesses and encourage people to discover new dining and shopping opportunities. The Harbor Ring will not only benefit Hudson County health enthusiasts, but the local economy as well.”

_____________
“The Harbor Ring will not only benefit Hudson County health enthusiasts, but the local economy as well.” – Meredith Sladek of Transportation Alternatives
____________
According to Sladek, the hope is that the route will inspire Hudson County residents to bicycle and support more bike lanes in their neighborhoods, although she admits that The Harbor Ring concept goes beyond the bicycle culture. Bike Hoboken is a supporter of the campaign and its Advocate Leader, Brian Wagner, has been working to get more people riding by having his finger on the bicycling pulse in the region which keeps him in the “know”. Wagner believes commuters, recreational riders and businesses will benefit from The Harbor Ring. He believes the benefits are economic, health and environmental.
“The value is linking the pieces of the New York City metro region together making it easily accessible by bicycle via the existing bicycle infrastructure,” said Wagner. “Less to no dependency upon having a car or being so reliant upon mass transit schedules. Hence the ease in which to get from point A to point B. In this country bicycles are seen as a toy or aspect of exercise. However in Europe a bicycle is seen as a means of transportation. [The Harbor Ring] is a seamless enjoyable cycling route that links both sides of the Hudson together. The Harbor Ring would pave the way for more folks to using bicycles.”
“Our general aim is that everyone can find something to enjoy by using the route, whether they live nearby or are visiting, and the whole community benefits,” said Sladek.

Existing and proposed pathways will be used for the route.
According to a press release by Transportation Alternatives (T.A.), New York City’s leading transportation advocacy group, people around the region now have the opportunity to easily explore the harbor’s many landmarks on bike and on foot from a route that offers unparalleled 360-degree views of the entire harbor.
Feedback and suggestions about the existing pathways are encouraged by the Harbor Ring Committee, which will work with T.A. for improvement of the route.
T.A. believes that the bicycle and pedestrian pathways have proven beneficial for transportation, tourism, real estate development and public health. According to Paul Steely White, executive director of T.A., the Harbor Ring draws on the success of New Jersey’s Hudson River Walkway, Manhattan’s Hudson River Park and the Brooklyn Waterfront Greenway.
“Waterfront bike and walkway improvements over the last two decades improved our region and enhanced the quality of life of countless people,” said White in a press release. “Now we must stitch these pieces together and complete the Harbor Ring to create a lasting legacy for the benefit of generations to come.”
The target year to raise awareness of the need for a bicycle and pedestrian pathway is in 2014 for the fiftieth anniversary of the Verrazano-Narrows Bridge, built in 1964. The bridge is the last “missing link” to complete the Harbor Ring. The original bridge plans were designed with a pathway between the suspender cables on the north and south sides but these were not included in the final plans.
“We are still in relatively early stages of operation and building a constituency, so there is no precise completion date set,” said Sladek.
According to T.A. Chairperson Dave Abraham, Hurricane Sandy brought many important issues to the surface regarding the region’s transportation system and emphasized the importance of the Harbor Ring. Abraham believes the project will benefit the entire region but most importantly residents of New Jersey and Staten Island who were some of the hardest hit by Sandy.
Fundraising is taking place through indiegogo.com/HarborRing to raise $17,000 to produce a print map of the entire route that will feature water sources, restrooms, transit connections, and local sites of interest. Donations are also tax deductible. The maps will be distributed for free to businesses, at events, tourist sites and transit hubs along the Harbor Ring route in New York City and New Jersey.
For further information, visit www.harborring.org.