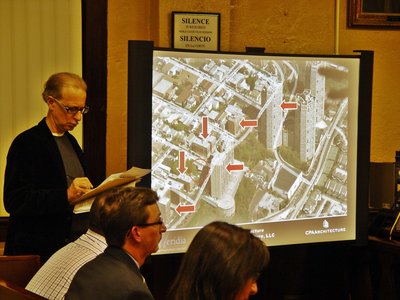 Just over a month after a group of West New York residents successfully fought a proposed high-rise development near 57th Street, a group is fighting a different proposed high rise – this one on Boulevard East.
On Feb. 23, residents attended a Zoning Board meeting at West New York’s Town Hall to protest the proposed Meridia Le Boulevard at 6609-15 Blvd. East. Like the other development, Meridia is being developed by a division of Capodagli Properties. It is a high-rise slated for an area zoned as mid-rise. Attorney Alvaro Alonso once again represented the developer.
West New York resident Joshua Breakstone gathered approximately 50 residents to attend the meeting, and also invited attorney Cynthia Hadjiyannis, who represented the residents regarding the other building.

Though the meeting marked the first time Meridia Le Boulevard has been publically presented, Breakstone was proactive before the meeting. On his website, www.concerned-citizens.net, he gathered nearly 100 signatures in a petition against the development.
“It seems to me that if you could pick the worst possible place with the most potential impact anywhere on Boulevard East,” Breakstone said in an interview, “you’d pick this spot.”
Meridia’s architect, Albert Arencibia of C.K. Architechture, presented the plans for the 13-story residential building to the board.
“Even though the site is not a high-rise zone, [it] is suitable,” he said, referring to existing high-rises near the site. “A high-rise development fits in well with the others.”
But Alonso insisted during the meeting that the architecture firm must “revise the plans in order to incorporate the [residents’] concerns.”
Zoning Board Chairman Kenneth Blaine then required that Arencibia submit revisions to the board at least 10 days before the next hearing, which will take place on Thursday, March 22 at 7 p.m., also at West New York Town Hall.

The lot lies on the corner of Boulevard East and 67th Street and is the home of an old Exxon/Mobil station. Though the area is zoned for mid-rise buildings with a maximum height of 135 feet and 12 stories, Meridia Le Boulevard would stand at 150 feet and 13 stories.
The development would house 123 rental units (the area is zoned for 69) and provide residences with 107 parking spaces on three separate levels. The logo, Meridia, would stand 15 feet high over a reflecting pool outside of the building. He said that the glass paneling incorporated in the design would inspire “transparency and a sense of awe” that would help the building to blend in with its surroundings.
Renters could choose from 105 one-bedroom units and 18 two-bedroom units with center corridors on each floor that would house laundry, storage, and business facilities.

Meridia Le Boulevard LLC submitted the latest version of its application to the Zoning Board of Adjustment on Feb. 3 after their initial plan was denied by a zoning officer on Jan. 9, according to a memorandum sent to the board by Joseph J. Layton of Maser Consulting firm and dated Feb. 17.
Developers who wish to build structures that do not align with a town’s zoning laws must apply for variances that must then be approved by the town’s zoning and planning board.
According to the memorandum, the building would require 12 “Bulk variances” and three use variances. The three use variances would be for height, for floor/area ratio – the total square feet of a building divided by the total square feet of the lot – and for density. The zoned “density” of the lot allows for 80 dwelling units per acre, and the variance would allow for 406.
Of the 12 “bulk variances” (changes to the law that dictates how much space the structure takes up), the most significant is a proposed increase in lot coverage, from 75 percent to 95.5 percent.

What ‘concerned citizens’ are saying

The petition on Breakstone’s website cites several concerns about the potential effects such a building would have on the neighborhood. It claims the development would increase the “crisis in public transportation” and lack of parking, and make it difficult for emergency vehicles to pass through. The petition also states that high-rises “ruin views of NYC and the river, and destroy the character of our towns.”
When the public was allowed to ask Arencibia questions after the presentation part of the Thursday meeting, Rose Puerto, who lives in the Versailles building at 6600 Blvd. East, said, “I’m not so sure [the building] fits in.” Residents in the room applauded, and Blaine said, “Let records show there was thunderous clapping.”
Virginia Datto has lived in a three-family building directly south of the development site for 59 years. “You say you want to maintain the beauty of Boulevard East,” she said to Arencibia at the meeting. But because of the high-rises built over the years, she continued, “It was beautiful before, but now it isn’t.”
A phone call and email to Capodagli Properties last week regarding Meridia Le Boulevard was not returned by press time. A phone call to the West New York Zoning Board was also not returned.