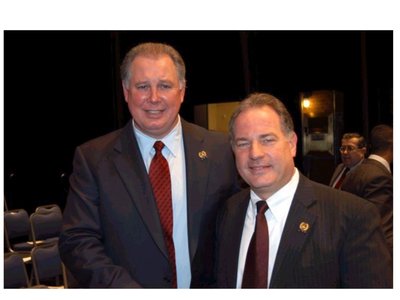 From the beginning, when he was charged in the federal government’s now infamous 2009 New Jersey political corruption sting, former Assemblyman Louis Manzo proclaimed his innocence. More to the point, he claimed that the sting was a political stunt to help get then-U.S. Attorney Christopher Christie elected governor.
Two weeks ago, after more than two and half years of legal wrangling, the remaining charges against Manzo were dismissed.
Now, Manzo says that there are probably a few other politicians who could have beaten the rap as well, but they probably didn’t have the money to fight. He also says the prosecution was selective in the sting, aiming for Democrats and purposely backing away from certain Republicans.
“God is great,” Manzo said in an interview last week, thanking his attorney John Lynch, the Justice Integrity Project’s Andrew Kreig, and many people who were there for him and prayed for him while he fought the charges. “I never lost my faith or my love for our country. Sometimes government will fail us, but we are blessed to live in a country where our founders had the wisdom to craft a Constitution to protect us from those failures.”

In July of 2009, Manzo was among 40 politicians and religious figures who were arrested in an FBI sting. The government used Solomon Dwek, a Central Jersey businessman who faced fraud charges, to offer local officials campaign donations in exchange for political favors. Manzo was accused of taking $20,000 to allegedly help Dwek, posing as a developer, get a fictional project approved.
No longer a public official when the FBI arrested him, Manzo had just lost the election to become mayor of Jersey City.
He was charged with two counts of bribery and one count of failing to report others who had taken bribes. But U.S. District Court Judge Jose Linares dismissed those charges two weeks ago.
This was the second and final victory in Manzo’s battle to clear his name. In May 2010, the same judge threw out other charges because they only could have been applied to someone still in elected office.
In response to the initial ruling, the U.S. Attorney’s Office leveled new charges against Manzo, but those were dismissed last week.

Sees the sting as a conspiracy

From the beginning, Manzo’s legal team contended that the charges were part of a conspiracy by some members of the U.S. Attorney’s office to get Christie elected governor, something Christie’s office denied. The Republican governor had been a U.S. Attorney at the launch of the investigation, and many of the people who were involved with it have moved on to work under him when he was elected in 2009. Almost all of the politicians arrested in the sting were Democrats.
In making his recent ruling, Judge Linares said that the bribery statute did not apply to Manzo as a candidate, and that his failure to report others taking bribes was not a criminal act.
The U.S. Attorney’s Office apparently does not intend to pursue the matter further, issuing a statement that said it would accept Judge Linares’ ruling.

Manzo said that his victory was partly due to the fact that he wasn’t an official. He said the criminal complaints and the indictments depicted conduct related to campaigns and elections – governed by an entirely different body of law than official corruption conduct.
“This gave underfooting to our argument that I could not be charged as a public official, since I was a candidate,” he said. “The Third Circuit initial ruling supporting my first dismissal agreed – they held that Congress intended that candidates must be treated as a separate class under the law.”
Manzo said he questioned possible misconduct and selective prosecution on the part of the investigators.
“The government did not dispute it,” he said. “They argued that prosecutors who had violated the Department of Justice guidelines had since left the office [working for Christie] and that the selective prosecution evidence did not meet the threshold for the court to throw out the case. We never got a ruling on this issue since the court threw the indictment out for other reasons.”
Manzo claims that some of the evidence was sealed to hide it from the public because it depicted prominent New Jersey Republican Party elected and party officials who were documented in FBI reports and DOJ authorization reports engaging in criminal conduct with Dwek.
“These same officials went onto prominently assist Christie’s campaign effort for governor,” Manzo said. “Dwek testified at trials he was told by the government whom to target and whom he could not target. One of the individuals actually had his name purged from a document already citing the individual’s illegal conduct.”
Another time, Manzo said, Dwek had an opportunity to bribe campaign operatives for Christie for a guarantee of patronage, but he was told not to, Manzo said.

A road map for investigators

“This was a travesty of justice,” Manzo said.
The trial transcripts may be a road map for reforming federal justice department operations in New Jersey – especially if the state’s federal legislators make use of the revelations in the case to establish a congressional oversight committee, Manzo said.
Manzo said the mishaps didn’t start with the Dwek sting. “Back when [Gov. Jim] McGreevey was running for reelection, the justice department was going after his people in this same way, taking out key people in the Democratic Party,” he said.
What the case shows, Manzo said, is that Dwek also tried to target Republicans and was allegedly told not to.
Did Manzo ever despair, or was there a moment when he thought he would not succeed in proving his innocence?
“No, never,” he said, “Especially after I saw what they did. I knew I didn’t do anything wrong.”
Evidence used against him – such as a confusing tape of him supposedly admitting to taking money – was a mishmash of information often taken out of context to imply guilt, he said.
One of the factors that figured into the case was conflicting testimony given by one prosecution witness who testified during a different trial that Manzo didn’t take money. That witness gave his testimony during the trial of former Secaucus Mayor Dennis Elwell.
“The federal government knows I didn’t take the money, and they have a witness in the Elwell trial to that fact,” Manzo said. “They just didn’t believe their own witness.”
Manzo said that he thought Dwek was offering a campaign contribution at the time. But then when out of earshot of other witnesses, Dwek started saying things that he hadn’t said before, Manzo said. At that point, Manzo said, he wanted to get away from Dwek. He called it a disturbing experience.
He also noted that he believes that thanks to the dropping of his charges, it’s possible that Elwell has new grounds to appeal his own conviction from last year.
He also said that a few other officials might have been able to successfully fight the charges against them, but lacked the money for a long legal battle.

While he didn’t rule out running for office in the future, Manzo said it was unlikely, saying it was difficult to serve as an honest public figure in an atmosphere of fear.
“Christie is like a Joe McCarthy,” Manzo said, referring to the former U.S. Senator who had instituted the eventually discredited anti-Communism hearings in the 1950s. “Like McCarthy, Christie demonized Democratic public officials, exploiting public opinion to his own political advantage. He wanted to demonize the Democratic Party, and what better place to do it than in Hudson County? Gov. Corzine couldn’t see it, and refused to believe anyone would use the U.S. Attorney’s office for political gain.”
While this pattern of misuse of justice should have changed when Christie vacated the U.S. Attorney’s office, Manzo said, it continued.
From the court case, Manzo said, it is clear that the people operating the sting never told their superiors that they were injecting money into ongoing campaigns.
“This means they corrupted the elections of Jersey City and Hoboken, and they had no authority to do that,” Manzo said.