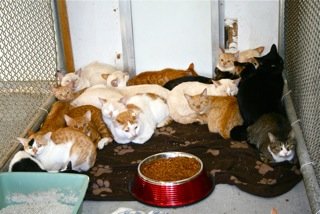 SECAUCUS AND BEYOND — In the recession, more and more animals have been abandoned, leading local towns to struggle to find places to put their stray and found animals. Some towns, like Secaucus, have even started their own shelters. And sometimes, they have seen groups of animals abandoned at once.
Tuesday morning at 6 a.m., Secaucus Animal Shelter staff discovered 24 cats stuffed into a dog carrier down the road from the shelter entrance, according to officials.
“All their little heads were sticking out [of the carrier],” said Mayor Michael Gonnelli. “It was [like] a horror movie.”
The cats, apparently house trained, were in excellent health, according to Gonnelli. They are now in the shelter’s isolation room. He said town policy restricts anyone from dropping off animals, and instead, the person could have notified the town or the shelter, which would have worked with the individual to find a home for the 24 cats.
The town is offering a monetary reward to anyone who can identify the individual who dropped off the 24 cats. The town plans to hold more adoption events to find a home for these cats among the many others that have arrived at the shelter due to a recent rescue from a home of an alleged hoarder. (The town recently brought charges against Martin, Joe and Mary Lewinski for animal cruelty last month after discovering 37 cats in their home, 18 of which had to be euthanized due to their poor state of health. The three pleaded not guilty to the charges last week in Secaucus Municipal Court.)
Watch for more on this story in this weekend’s Secaucus Reporter.