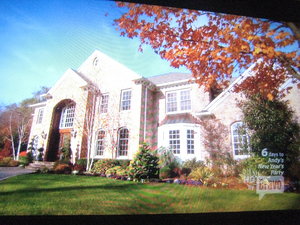 Theyyyyy’re back. Cast members of the Real Housewives of New Jersey Season 3 carped at each other on Sunday night during the second part of Bravo’s two-part reunion show.
Caroline Manzo, Teresa Giudice, Melissa Gorga, and Kathy “I’m the world’s best mom” were there. Jacqueline Laurita was absent (see last week’s recap, linked below, for explanation).

There were two big revelations in Part 2. One of them is that apparently Andy Cohen reads the Hudson Reporter website (this one, hudsonreporter.com)! Or at least our scoop on Albie Manzo being up for a deputy sheriff slot was mentioned. Albie lives in Hoboken. Andy asked Caroline if Albie has a gun, and she said yes. But the sheriffs haven’t been approved yet (as the program hasn’t been approved in general) and it’s a volunteer program. Albie can probably earn enough money for his share of the Hoboken waterfront apartment rent through appearances right now.

The bigger revelation of Part 2 was the fact that Caroline is not speaking with her sister Dina, who had left the show after season 1 (smart girl). They haven’t spoken in months. Caroline has tried, but Dina refuses to speak to her. Caroline says it’s Teresa’s fault, that Teresa had put things in Dina’s head. Hey, Caroline and Dina are sisters…if Teresa can accomplish that feat, she must really be a master manipulator. It’s often hard to know what’s really going on behind the scenes, but it can’t be that simple, or is it? Why would Dina listen to Teresa? Maybe someday we’ll find out.

Caroline said she had texts and e-mails from Teresa to Dina proving her case. Let’s see them This is the internet!

Anyway…reunion show host (and Bravo exec) Andy Cohen seemed to beat up on Teresa Giudice the most in parts 1 and 2 of the reunion. She was already fighting with the other three women, so he actually made it four against one instead of three against one. Andy isn’t a journalist, so he doesn’t have to be impartial, but it seemed a little uncalled for. He kept asking her to repeat a word she got wrong, made a sarcastic comment about her spending money on her daughters’ Christmas gifts (a comment that fell flat when everyone was silent after it), and told her — when she said that she didn’t let little things bother her after dealing with Kathy’s daughter Victoria’s recovery from a brain tumor years ago — that it seems like she DID take little things seriously. Well, so do all the housewives. Why keep singling Teresa out?

A clue came at the end, when Andy said it was offensive how Teresa’s husband calls Joe Gorga a gay slur (the f-word) as a matter of course. Teresa responded that even though it isn’t right, both Joe Gorga himself and Kathy’s husband Richie Wakile use the same slur to insult other people. Andy wasn’t interested. During part 1 of the reunion, Cohen had also pointed out that Teresa had said something that could be taken as offensive to Jewish people. Teresa, you are clearly not scoring points with Andy Cohen.

On the after-show, Andy revealed that he’d gotten lots of texts from people saying he was disproportionately hard on Teresa, so we weren’t the only ones who thought so. Even Kelly Ripa, the guest on the aftershow, kinda agreed.

Meanwhile, part of the episode also showed a photo montage of the housewives and their husbands talking about sex, sometimes bragging about how often they do it. Okay, fine, keep at it, but please don’t reproduce anymore! You’re tainting the Jersey population!! (Caroline Manzo, to her credit, kept mum about how many times she and Albert knock boots. Okay, a rare moment of class on the show.)

Let’s take a moment for Kathy Wakile. Not only does she constantly talk about how important being a mother is to her, she has twice criticized Teresa Giudice’s parenting decisions. If you try, you can always find a way to make someone look like a bad mother, so you really shouldn’t do it unless you know the whole story – and even then. Yet, Kathy tried to say she didn’t criticize Teresa. Didn’t she gripe to Teresa that her child had been left “alone” at the christening? Didn’t she also, on the reunion show, criticize Teresa for letting Gia sing that song about the rift in their family? That’s two criticisms. You did it. Own it.

And now it’s over. Whew. We’re all spared until season 4. But you know what you can do to fill your time instead? Read Hudson County’s community newspaper group, the Hudson Reporter, based in Hoboken. You might even find out more about Albie, Greg, and Chris!

Also, we’d like to thank our previous recapper, Eileen, who wasn’t available for the last few recaps because she’s busy doing much better things. This recap would actually have been funny if she’d done it. Thanks, Eileen! You can click the links below to find the recaps she wrote.