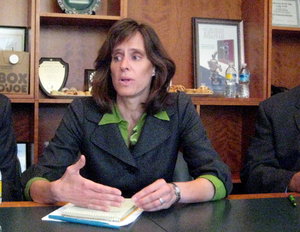 HOBOKEN — Hoboken Mayor Dawn Zimmer is facing a bit of a political dilemma. For county freeholder representing her town, does she endorse a blogger who supports her, or the incumbent who is much more likely to win but who has been criticized by several of her allies?
Zimmer’s staying out of it. According to the Hoboken Reporter story this weekend, she said she’s not endorsing anyone, and declined to elaborate.
Incumbent Anthony Romano faces blogger Kurt Gardiner in the race.
Gardiner has a response about Zimmer’s lack of endorsement.
Read the story here. What do you think? Comment below!