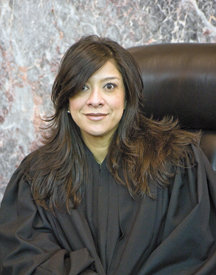 Former Union City resident and Emerson High School student Judge Esther Salas is the first Hispanic woman to be appointed a U.S. District Court judge in New Jersey. Back in 2006 Salas was the first Hispanic woman to serve as a United States magistrate judge in the District of New Jersey. So breaking new ground is not new to her.
The new post is a lifetime appointment, in contrast to the termed position of magistrate in the courts. Salas said after hearing of the new appointment, “I was humbled and overjoyed. It is hard to imagine to see a little girl [years later become] a judge. Lots of mentors and people helped me along the way.”

Esther Salas is originally from Monteray Park, Calif. At the age of 5 Salas and her mother, Aurelia Salas, moved to 27th Street in Union City with her other siblings. They later moved to 15th and Bergenline Avenue.
One of the things Salas remembers most is growing up and having to interpret for her mother at the Welfare office and later helping friends with life issues, which attracted her to a field of study focused on human services.

Salas is a former Emerson High School student and was a cheerleader. After high school, Salas was interested in attending Rutgers with her friends because it was such a big school community, but it took some convincing for her mother to allow her to attend.
Salas dormed at the Rutgers campus and was active in clubs and activities, which she said helped her adjust to campus life. “I credit my success to minority programs in [Rutgers] New Brunswick,” she said. Later in her college career Salas interned at the Essex and Middlesex County courts before moving on to Rutgers Law School where she received a Juris Doctor.
Judge Salas worked temporarily for Garces & Grabler, where she practiced criminal matters in superior and municipal courts. Later, Salas worked as a federal public defender from 1997-2006 where she represented clients in federal matters and researched and drafted many documents.
Salas later served as magistrate judge for five years before being recommended by Sens. Frank Lautenberg and Robert Menendez to the position of U.S. District Court Judge of the United States District Court for the district of New Jersey.
Pres. Barack Obama nominated Salas to the position, which was later confirmed by the U.S. Senate.

Some of Judge Esther Salas’ teachers remember the class of 1987.
“As a social studies teacher and class advisor in 1987 I had the distinct pleasure and honor to know Judge Salas as a student during her high school years,” said the assistant principal of Union City High School, Daniel A. Frezzo. “She demonstrated a compassion and strong character that made her stand out amongst her peers. She was a true leader who continued along that path as she went off to college. I followed Esther and her band of friends as they each pursued their goals and remained close over the years. All like Esther became successful and maintained a high regard for community and giving back. Each year many of her friends return to our high school and spend the day speaking with our students.”
“The class of 1987 was a great class,” said Union City High School teacher Joe Rudloff. “Earlier this year, I had the privilege of visiting Judge Salas at her office in Newark. I am so glad that Esther still remembers her roots. Esther continuously referred back to her teachers and the wonderful education that she received in the Union City School system.”
Rudloff said, “For the past year, educators have taken a major hit. We are now being viewed as villains thanks to our governor. Yet, when I heard that Esther received 100 percent approval from the United States Senate to be appointed to the position of federal magistrate, I knew it was important to get the message out to the teachers in the Union City School System that we have another success story. Too many times, we hear about the failures. News of Esther’s appointment is an uplifting moment for the teachers, friends, and family.”

Judge Esther has been happily married for 18 years to Mark Anderl. They have an 11-year-old son, Daniel, who plays left field and pitches for his Little League team. Judge Salas is also a Met fan.
Salas said her husband has been a great support in raising their child Daniel during her initial work in the courts, which took lots of her time.
She said that when she underwent a background check, she found out where her father lived. This allowed her to reconnect with him after he had lost contact with her and her family when they moved away from the West Coast.
Santo Sanabria may be reached at SSanabria@hudsonreporter.com.