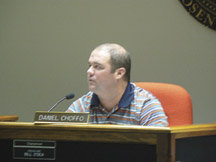 The year-long controversy over Appleview LLC’s proposed condominium project near the North Bergen/Guttenberg border reached the Hudson County Planning Board on Wednesday. The focus remained on concerns over a nearby high pressure natural gas pipeline and how the building would affect the Palisade cliffs.
The North Bergen Planning Board approved the project, a 59-unit residential complex at 7009 and 7101 River Rd. in North Bergen, over residents’ protests on March 30, with numerous conditions. The project is near the Galaxy Towers in Guttenberg and 20 feet from a major natural gas pipeline.
The developer, Carmelo Spoleti, sought several variances because Appleview has only 2.3 acres of land, and 5 acres are required by code for a building of its size. The building exceeds the maximum allowable building coverage, and the project lacks the required setbacks.

_____________
“You’re losing our attention.” – Daniel Choffo
____________
The Williams Transco Gas Pipeline originates in Texas and transports around 40 percent of New York City’s natural gas. Members of the public fear the Appleview construction could disturb the 36-inch pipe and cause an explosion.
For the North Bergen Planning Board’s approval to become permanent, Spoleti must obtain approval from the U.S. Department of Homeland Security; agree to a prohibition against blasting on the site; obtain N.J. Department of Environmental Protection approval for the remediation of contaminated soil; make a financial contribution to the township for sewerage improvement, and use an approved containment method to protect residents from sliding rock or soil from the Palisade cliffs behind the building. They also must meet requirements for federal pipeline regulations, and those of the North Bergen Building Department and the North Hudson Regional Fire and Rescue.
The county Planning Board must also approve the project in order to ensure the project is in accordance with county regulations.

The developers presented their plans to the board on Wednesday. Twenty-five to 30 opponents of the project were out in force.
After the Pledge of Allegiance began the meeting with “and justice for all,” an audience member shouted, “Sometimes!” The sentiment was echoed throughout the audience.
After two hours devoted to other business, the county Planning Board prepared to hear arguments from Appleview attorney Carmine Alampi and attorney John Lamb of the Galaxy Board of Trustees.
Residents of Guttenberg’s Galaxy towers, situated in close proximity to the proposed development, are among those opposed to the condominium development.
“The developer is not concerned with safety,” Siat Ng, a resident of the towers, told the board members.
Alampi’s presentation revolved around testimony from Calisto Bertin, an engineer and principal of Bertin Engineering.
Bertin’s testimony included several exhibits. He testified that the development’s height and density would comply with existing requirements.
“Traffic impacts were reviewed by the county and accepted,” added Bertin. The 59-unit five-story building would feature 116 parking spaces – 73 of which would be located inside the building.
He also testified that as an engineer he was unable to identify any risk or problem that might affect the gas line. “We tried to identify what could happen during construction that might impact the gas line,” he said. Representatives from Williams -Transco were not in attendance.
Regarding the gas line, Lamb – the attorney from the Galaxy – said, “I think they [Transco] should be here.” He then added that there has never been an agreement between Transco and the developer.
Another concern of the opponents is that the construction of the towers would lead to the removal of rock and soil from the Palisades. One of Lamb’s arguments was that at 59 units, the development would disturb steep slopes. He and Bertin debated whether that was true.

The board members became restless due to the specificity and length of Bertin’s testimony, which ran roughly an hour and a half.
“You’re going through all this technical stuff,” said member Renee Bettinger. “It’s a quarter to 10 tonight. We’re all exhausted.”
“You’re losing our attention,” added Daniel Choffo, chairman of the Planning Board.
After the testimony came to a close, Lamb’s cross-examination of Bertin began. It lasted roughly 30 minutes before the board decided to stop the hearing at 10:30 pm.
Lamb said that he intended to have a planner, who was not present at the meeting, testify on the behalf of his client, Galaxy Towers.
At the conclusion, the board voted to adjourn the hearing until the next scheduled Planning Board meeting on Aug. 17.
Stephen LaMarca may be reached at slamarca@hudsonreporter.com.