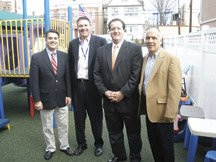 UCP of Hudson County sent out a unique invitation in mid-December for a new fundraiser, asking people not to come.
Unlike other dinners, testimonials, and social occasions, UCP’s invitation is unique in that there really is no event, designed to allow people with otherwise very busy social schedules to make a donation to UCP, but not to feel obligated to attend any particular event or get saddled with the additional costs associated with attending (such as the purchase of new clothing, the hiring of a babysitter, even gasoline and other transportation costs).
UCP (which stands for United Cerebral Palsy) is one of the key providers of services to the disabled, not just throughout Hudson County, but also in Passaic, Essex and Bergen counties, as well.
The name derives from its founding in 1951, when the group formed an association with the national organization. But over the years, UCP has gone on to develop local programs for people with various disabilities.

“This will allow people to give something and then use what they would otherwise have to spent to perhaps spend something on their families.” – Vince Lombardo
________

While UCP will continue to hold other fundraisers throughout the year, this one will save people time and money.
“There will be no need to buy a dress, get a tuxedo, hire a babysitter, go to the salon, bid at a silent auction for a gift you can’t use and will re-gift, listen to boring speeches, pay for valet parking, eat another catered meal, etc., etc.,” the invitation said.
“At this time of year, people are constantly getting hit with invitations to events,” said Vince Lombardo of the UCP. “This will allow people to give something and then use what they would otherwise have to spend to perhaps spend something on their families.”
The invitation provides two spaces, one which says, “Yes, I will not attend,” and offers payment of $50 per “non-ticket,” and the other says, “No, I wasn’t planning on attending anyway, but would like to make a donation of…”
The non-event, which has no keynote speaker, guest list, or buffet, is scheduled for Feb. 31 – although the effort at fundraising will continue beyond that fictional date.
Lombardo said he got the idea from a fundraiser he remembered from about 20 years ago in the Midwest called the Policeman’s Ball.
The non-event also helps because, generally, the costs associated with doing a fundraiser eat into the donations, so in many cases a charity only realizes slightly more than 50 percent of the total raised after overhead, such as printing costs for the journal, catering, and other expenses.
“We even did the printing in house,” he said, but noted that the printer UCP usually uses sent in a check for two tickets to the imaginary event.
Creative fundraising is particularly needed in hard times such as these, he said, noting that while some people are stepping up to help fill gaps in traditional funding, UCP still needs to find revenue.
Recently, he noted, the state Division of Youth and Family Services cut UCP’s transportation funding for one of its Saturday programs by $90,000.
The county – through the efforts of Director of Social Services for Hudson County Carol Ann Wilson – managed to find $60,000 to fill the gap. UCP was stuck with a hard choice of either cutting back on the program by two thirds or eliminating some of the transportation.
John Hogan of Welcome Parking heard about the problem during UCP’s annual breakfast in October, and with Bret Hardwood of Bret Hardwood Parking Strategies, managed to come up with a pledge for about $16,000, allowing the program to move ahead fully.
The administrative offices and the Pediatric Medical Daycare programs take place in Bayonne. There is also two Growing Tree Learning Centers located in Jersey City and an After School Program and Saturday Respite that take place in Hoboken.
UCP also runs the Adult Special Needs Program, the Adult Aftercare Program, the After School Program, and the Saturday Respite at the UCP Center on Kennedy Boulevard in North Bergen.
While many programs are run out of its centers, the reach of UCP is made greater by its in-home programs.
People in North Bergen, West New York, Bayonne, Hoboken, Kearny, Harrison, and even tiny East Newark get help.