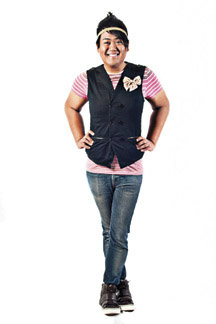 Greggy Soriano of Jersey City probably didn’t think he’d be able to captivate an entire nation of fans on TLC’s Hoboken-based reality show “Next Great Baker,” but judging by those who have reached out to him on Facebook and beyond, he’s more popular than he expected.
“I cried my eyes out when you got kicked off Cake Boss,” wrote one fan on Soriano’s Facebook page. “I was so mad at Buddy [Valastro] for weeks.”
“I’m so angry you are off Great Baker!!!,” wrote another fan, a 26-year-old from Michigan. “I don’t even wanna watch anymore.”
Soriano was recently given the boot from TLC’s competitive hit show “Next Great Baker,” a spin-off from the Hoboken based “Cake Boss” show. However, a new career may be cooking for Soriano, who plans to continue to decorate cakes in Hudson County. He knows he has fans who would like to sample his work, even if the Cake Boss didn’t deem him to be the next great baker.

“I have so many fans out there,” Soriano said in a recent interview with The Hudson Reporter. “I get tons of letters and emails. They’ve [the fans] managed to find all my emails, personal and business, just to try and talk to me about how I’ve inspired them. It’s amazing and overwhelming.”

Own bakery in JC?

Soriano has his sights set on his own bakery in Jersey City, as well as establishing his own brand, book, and product line. Though the details of the proposed bakery are not yet finalized, Soriano said he hopes to begin baking downtown.
But he won’t forget his stint on the show any time soon.
“It was so much fun,” he said. “I really wanted a chance to show my skills.”
With the cameras rolling, money, and a job at Carlo’s Bakery on the line, Soriano knew what was at stake.
“There was tons of pressure trying to make amazing cakes,” he said.
Although Valastro may appear to be a tough guy on the show, constantly barking orders at the contestants, Soriano had a unique description of the famed Cake Boss.
“He’s like a live Super Mario Brother,” Soriano said. “He was so much fun. He gave off this really mean persona, but he is the sweetest guy I’ve ever met. He’s fun and he’s animated.”

A background in entertainment (and baking)

Soriano is no stranger to the camera.He worked in a musical comedy and toured with the Young Americans, a group that travels internationally to help younger entertainers learn about production and acting. Before he appeared on Next Great Baker, Soriano worked at a bakery in Long Island, N.Y., and also worked on an off-Broadway show.
In addition to his new experience on TLC, he was cast as “Greggy” from Beauty and the Geek on the CW Network, and has designed cakes for wedding shows on television.
Soriano said baking in front of the camera was “weird at first,” but he eventually became comfortable with the camera crew’s presence in the kitchen.
Soriano said he turns watching himself on television into a family party.
“I have a huge Filipino family,” he said. “We would cook, have food, and all watch the show. My friends have been wearing their ‘Team Greggy’ shirts. It’s been a lot of fun.”
Soriano, who has lived in Jersey City for two years, said he one day wants to have his own “cooking or food related show.”
“Right now I’m just focusing on my brand,” he said. “I’m also working on my book, a product line, and hopefully along the way I get my show.”
Greggy is also paying attention to other Jersey-based shows.
“I don’t watch much [television],” he said. “But yeah, I totally watch Jersey Shore. I just think it’s so funny.”
Ray Smith may be reached at RSmith@hudsonreporter.com