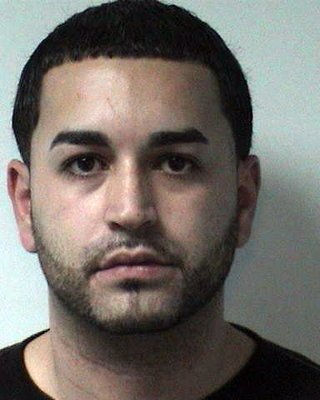 According to police, a 61-year-old man claimed that he was locked in a portable potty all night on Dec. 2, the night of the annual outdoor WinterFest celebration in North Bergen, but surveillance showed that he had only been locked in the stall for a few hours.
Police said that video surveillance showed that the portable toilets at 79th Street and Bergenline Avenue were locked by the company who leased them around 7:30 a.m. so they could be transported back. At around 11 a.m., someone heard a man inside one of them asking for help, so North Hudson Regional Fire and Rescue responded and cut the bolt lock of the stall. Police said that the man appeared intoxicated and had the odor of an alcoholic beverage on his breath.
Cannella said that while he may have spent the night in the stall, it appears that he wasn’t locked in.
He was transported to Palisades Medical Center in North Bergen.

Arrested twice in one week

After almost being released, Adham Khales, 25, of North Bergen was arrested when he allegedly threatened a police officer last week, his second arrest in one week, said police.
According to the Commander of the Detective Bureau Lt. Frank Cannella, Police Officer Roberto Ruiz observed Khales being escorted out of a bar on Palisade Avenue for allegedly fighting on Dec. 4 at 2 a.m. He recognized him and checked whether there were any warrants for his arrest, said Cannella.
The search came up positive. Khales was told he was being arrested and was placed into a police car. Police said he appeared to be heavily intoxicated.
However, Ruiz was then notified by the Police Department that the warrant had “already been executed” and that it was a glitch in the computer system.

Ruiz asked Khales to step out of the police car and told him he was being released from custody.
However, according to Cannella, Khales allegedly got face to face with Ruiz and “threatened his life,” which caused the officer to place him back under arrest.
“At which time Mr. Khales [allegedly] refused to get back into the vehicle, being belligerent, cursing and screaming in public, creating an even larger disturbance,” said Cannella.
Khales also allegedly kicked Ruiz in the thigh. At headquarters while being processed, he allegedly threatened “everyone and anyone who was in earshot,” said Cannella. He allegedly claimed he was in the “CIA and the Secret Service” and would take down the department, said Cannella.
He was charged with disorderly conduct, terroristic threats, and aggravated assault on a police officer. Judge Nino Falcone set his bail at $25,000 with no 10 percent option.
Cannella said that Khales has been “involved in several incidents” in the last month.

Latee Jamel Ison, 23, of North Bergen was arrested for burglary to a motor vehicle on the night of WinterFest after a neighbor claimed to have witnessed him in the act.
On Dec. 2 at around 10 p.m., a neighbor saw him allegedly “rummaging” through the van of another neighbor in the area of Woodcliff Avenue. When he called out at Ison, he allegedly fled on foot.
The neighbor contacted police and told them Ison’s description and the direction in which he was running. The Police Department broadcasted who they were looking for, and not long afterward, a Guttenberg Police Officer spotted Ison on 77th Street and Broadway.
Judge Nino Falcone set his bail at $2,500 with no 10 percent option.

Cristian Narvaez Medina, 20, of Newark, was arrested for being in possession of what police believed to be marijuana on Dec. 3 around Midnight.
According to Cannella, police were called to the corner of 87th and Second Avenue on the report of a large fight with weapons. When officers arrived, a group of males were stopped where the fight may have occurred.
Officer Robert Ruiz witnessed Medina allegedly throw something under a vehicle. After retrieving the item, the officer found a small plastic bag that appeared to be filled with marijuana.
He was arrested and released on a summons.
Tricia Tirella may be reached at TriciaT@hudsonreporter.com.