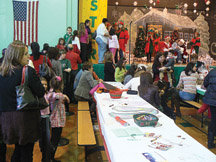 For most people, Christmas fever sets in as soon as last bits of leftover turkey are consumed and the first chords of “Feliz Navidad” play on the radio. For the Daniel Webster Parent Teacher Participation Association, it starts about 11 months sooner, when they start to prepare for their annual “Breakfast with Santa” event.
“[Breakfast with Santa] is a big undertaking,” said Daniel Webster Kindergarten teacher Kerrin Murphy-Burke. “It’s amazing what goes into this.”
It’s not just about Santa or the breakfast buffet. It’s also about the Christmas music and decorations, the arts and crafts, the community involvement, the attendance of Mayor Richard Turner and the Weehawken Town Council – and the gift baskets.
Though PTPA President Karen Osborne described the event as “one of the most popular,” it’s hard to imagine anything topping this year’s Breakfast with Santa, which reached North Pole-heights in terms of attendance, with close to 1,000 over two sessions.

For approximately 10 years now, the PTPA has served up Breakfast with Santa to the delight of Daniel Webster students, their families, and the Weehawken community.
Held last Saturday, the event was split into two sessions –a morning session from 8:30 to 11:30 for pre-K and kindergarten students, and an afternoon session from 12:30 to 3:30 for first and second graders.
Buffet-style food was served along the side of the gymnasium, and activity placemats and buckets of crayons donned each table.
This year, Daniel Webster again welcomed back 15-year-old Weehawken high school student and renowned singer Jack Skuller, who performed along with his band.
It’s an event that draws outside of the classroom –and even outside of one’s religious preferences.
According to Murphy-Burke, Daniel Webster has about 390 students total spanning four grades, with almost all – even her “non-Christmas” kids” – in attendance. The other 1,210 attendees, she said, were siblings, relatives, and parents.
According to Murphy-Burke, Daniel Webster Principal Anthony Colasurdo had to make three separate phone calls to parents before the event that Breakfast with Santa was at capacity.
A constant line of children snaked along the wall of the Daniel Webster gymnasium for a chance to sit with Mr. and Mrs. Claus, take a picture, and receive a Christmas gift.
Mr. and Mrs. Claus this year were Jack Satter, who is very involved during the holidays with Daniel Webster School, and Anne Grimaldi, a soap actress and mother of a Daniel Webster first grader.

If one were to Christmas-ize the PTPA’s involvement, they would be the plate on which the milk and cookies sat, the backbone of this Santa-luring event. The PTPA is made up of President Karen Osborne, Vice President Mauricio Garcia, Secretary Tory Swanson, and Treasurer Anthony LaMalfa.
The PTPA put in some money of their own but also spent a large amount of time soliciting community donations to defray costs. Among the gift baskets auctioned off in the raffle were “Breakfast in Bed,” “Night in NYC,” “Sports Lovers,” and “Taste of Italy.”
Along with providing food and activities, the PTPA auctioned off elaborate gift baskets.
Daniel Webster teachers also played a large role, from composing gift baskets with their classes beforehand to volunteering at the actual event.
As custom in Weehawken, the entire community pitched in to make the event a success.
Children from Peer Leadership, the National Honor Society, Weehawken Girl Scouts, and St. Lawrence Church acted as “Santa’s helpers,” helping to organize the event as well as serving food and cleaning up.
Support and donations came from local businesses, the Weehawken & You Civic Association, and parent volunteers, who solicited donations and helped out at the event.
Next up for Daniel Webster festivities will be the Holiday Show with the theme “Snow,” on Dec. 23 at 9 a.m., which will feature first grade and second grade students and the choir children from both grades.
“Christmas is a really big deal with 4- to 8-year olds,” Murphy-Burke said.
Deanna Cullen can be reached at dcullen@hudsonreporter.com