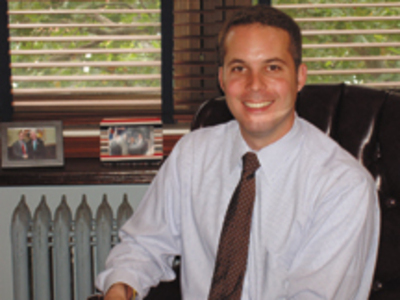 Mayor Peter Cammarano is building his cabinet of directors. “It’s going to look like Hoboken,” he said last week.
The city will have six departments, each with a director, and the mayor is also entitled to appoint other positions like chief of staff and corporation counsel (a city attorney). Each appointment is on an “advice and consent” basis, meaning the mayor makes his recommendations to the City Council and the nine-member board has to vote on the approval.
With several political opponents of Cammarano’s elected to the council last month, he may have some difficulty getting his selections through.
Last week, Cammarano unveiled some of the names he is almost ready to present to the council. He said all the recommendations are his first choices.
The council will meet Wednesday, July 22 and hopes to vote on the cabinet that night, said to Council President Dawn Zimmer.
She had said at their reorganization meeting on July 1 that an ad hoc committee will be formed to review the appointment recommendations before a vote.
Cammarano said he intends to give the council as much time as possible to review the appointments, and that as soon as he has all of his recommendations ready, he will submit them.

The six city departments are Administration, Finance, Community Development, Health and Human Services, Environmental Services, and Public Safety.
The administrative director is the business administrator, a position occupied by state-appointed Fiscal Monitor Judy Tripodi for the time being. That person puts together the city’s budget each year.
Cammarano has repeatedly called the business administrator the most important position in the “cabinet.” Having Tripodi in place allows him to focus on filling other positions at this time.
The Finance Department was revived last year, after what Cammarano called a “failed experiment” by the city to outsource their financial matters to an outside firm.
Nick Trasente, finance director, was appointed by Tripodi – not the City Council – and according to City Attorney Steven Kleinman, he serves under a civil service-protected title, unlike all other directors. As such, his term does not expire during the mayoral transition like the other directors. Cammarano has said that Trasente will remain in the position.

He said the city may attempt to redesign parts of the government, especially the Department of Community Development, which deals with development plans and compliance. Cammarano said members of his transition team have been considering expanding the department to encompass all economic development.
Other aspects of city planning like parking may fall under this new umbrella, but the mayor said there aren’t any detailed plans for the reconfiguration yet. Right now, Hoboken has a Parking Utility in City Hall to handle parking revenues, but Cammarano said planning aspects of Hoboken’s worsening parking situation could be better addressed if the division worked closer with the community development team.
Other restructuring may find the Office of Emergency Management moved under the auspices of the Public Safety department, rather than under Administration, where it is now.
Community Development Director Fred Bado retired on June 30, and Cammarano said no interim director will be appointed. The department doesn’t have a day-to-day responsibility in the city government, Cammarano said, but rather a long-term planning obligation that can be put on hold for a few weeks.
As candidate interviews wrap up, Cammarano said the leading contender for the position is Todd Poole, former assistant director of Economic Development at New Brunswick’s Department of Planning.

Public Safety Director Bill Bergin’s term has expired under the new administration, but he has agreed to stay on as a “holdover,” according to Kleinman, until the new public safety director is appointed.

The mayor said his administration will not employ any dual-position holders.
________

Cammarano said he will recommend Union City police detective Angel Alicea, who was on the Hoboken Housing Authority board until last year, when Zimmer and others on the council refused to reappoint him, drawing protests from residents. Alicea also ran for council on Cammarano’s mayoral slate.
Alicea will be recommended for the directorship once he resigns his detective position in Union City, Cammarano said.
The mayor said his administration will not employ any dual-position holders or dual-pension collectors. “This administration is going to have a strict policy,” he said.
Many people see the public safety director position as extemporaneous – it was resurrected last year to fill a gap while police and fire chiefs were being decided on – but Cammarano sees the position as a necessity. He said it is important to have an administrative head of fire and police, considering the amount of legal wrangling and administrative duty that is above the threshold of the chiefs, like disciplinary proceedings.
He also said that a representative of the department is required at each City Council meeting as well as other meetings, and a director could alleviate the need to have both chiefs present.
“You want a civilian authority who is a member of the administration responding to those questions [at the meetings],” Cammarano said.
Bergin was hired at a salary much lower than other directors, under $30,000, while other directors make over $115,000. Cammarano said Alicea, if appointed, will assume the same rate as Bergin.

John Pope, who was directing the Department of Health and Human Services under the previous administration, will now assume duties in the Department of Environmental Services, if appointed.
Jim Ronga, who was promoted to director of environmental services recently, was offered a deputy position when his term expired, according to the city, but declined the offer.
Recently departed City Council member Terry LaBruno will return to public service to head Health and Human Services, according to Cammarano. LaBruno is a math teacher at a Jersey City private school and has served on the Hoboken Housing Authority board.
Until the new appointments go before the City Council, Cammarano said Pope is covering both positions.
“He’s wearing both hats right now,” the mayor said, “Not formally, but operationally.”
Many people consider the appointment of LaBruno a favor to outgoing Mayor David Roberts, on whose ticket she ran and to whom she was fiercely loyal.
Although Pope ran an efficient department under Roberts, many see his new job as an olive branch to the Russo family, with whom Pope many times has allied himself.

Kleinman, who is getting married in the fall, will stay on through the transition period, but Cammarano expects to introduce Jason Orlando soon as the corporation counsel-in-waiting.
Orlando, according to Cammarano, is a Harvard Law School graduate with significant experience at the New Jersey Attorney General’s office.
One of Cammarano’s goals is to reduce legal costs from outside firms by staffing the counsel’s office with a few deputies. Cammarano himself is a lawyer.
He said Orlando will work with Kleinman, and a deputy will be added at some point.
The city will determine if there is a cost savings by keeping work in-house, and may add another deputy.

The City Council has introduced an ordinance to regain power over Zoning Board appointments, but the new mayor is not handing over the reigns just yet.
Mayor Peter Cammarano said he plans to veto the measure if it passes on second reading, which would force the City Council to approve it with a supermajority, or six votes.
“If and when that measure reaches my desk, I’m going to veto it,” he said.
Right now, the City Council confirms or denies mayoral appointments to the nine-member Zoning Board of Approvals. With the change, the council would be the body that makes the appointments.
On first reading, the measure garnered five votes and complaints by the dissenting four members.
Councilwoman Beth Mason voted against the measure on first reading after requesting that the council remove a part of the ordinance that addressed a completely separate issue regarding redevelopment. Councilman Nino Giacchi requested that the ordinance be tabled, but was rebuffed, as was Councilman Michael Russo when he called the move a “power grab” and an indignant start for the new mayor.
Cammarano said he doesn’t remember seeing the mayor’s veto power used in Hoboken in recent years, and that it isn’t a power he hopes to use much.
“The use of a veto, in any chief executive office, is something that is used sparingly,” he said.
In this case, he said the council never even spoke with him about the move, and did it “within minutes of delivering speeches where they extolled the virtues of cooperation.” Cammarano was referencing the speeches of new City Council members Carol Marsh, Ravi Bhalla, and Dave Mello at their induction services on July 1. Marsh, Bhalla, and Mello joined with new Council President Dawn Zimmer and Council Vice President Peter Cunningham for the five votes needed to pass the ordinance on first reading.
Timothy J. Carroll may be reached at tcarroll@hudsonreporter.com.