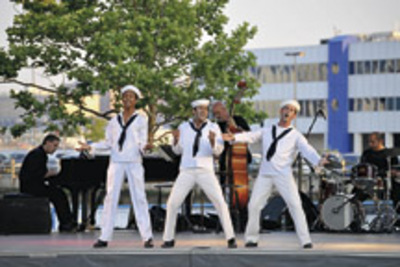 Lincoln Harbor was alive with the sound of music a week ago Monday with a free concert honoring one of Weehawken’s greats. As part of Weehawken’s 150th anniversary, the opening concert of the Hudson Riverfront Performing Arts Center’s (HRPAC) Summer Concerts on the Hudson series celebrated Jerome Robbins, who grew up in the township and later became an influential director and choreographer. The series is sponsored in part by The Hudson Reporter Newspapers.
The show welcomed hundreds of guests and included a live band, a tap dancer, and a cast of talented Broadway performers.
“It’s great to be watching a performance like this on a night like tonight,” said audience member Emma Murphy, who explained that she came all the way from Ridgefield Park in Bergen County to hear the music and enjoy the waterfront. “Shows like this are really great for the town of Weehawken.”
One of the concert’s biggest hits was a stellar performance of the songs “Maria” and the romantic duet “Tonight” from “West Side Story.”
“The songs from ‘West Side Story’ were really breathtaking,” said Weehawken resident and photographer George Chemas. “The show has been incredible. Being the first in the series and the 150th anniversary concert, [the organizers] really pulled out all the stops.”

According to Mayor Richard Turner, this year’s concert had a huge turnout of Hudson County residents who came to celebrate the township’s anniversary.
“It’s a real local crowd,” Turner said. “And we couldn’t have asked for a better night to hold the event.”
Becki Cannata was enjoying the concert and brought her two children to enjoy a fun filled night along the Hudson.
“It’s a special treat for the kids,” Cannata said. “They’re rapt. They’re really into the tap dancing. I’m starting to wonder if tap is something I should be looking into.”
Presented by HRPAC, Summer Concerts on the Hudson is a free series of monthly performances throughout the summer season. The next concert will feature classic Soul and R&B by Tre Williams on July 22.

One of the most prolific directors of the 20th century, Robbins graduated from Woodrow Wilson High School before breaking into the entertainment industry. He worked on Broadway classics like “West Side Story,” “Peter Pan,” “The King and I,” and “Fiddler on the Roof.”

“He really highlights the artistic talent that there is in Weehawken,” said Mayor Turner. “We’re proud to call him one of our own.”
The performance also celebrated the township’s 150th anniversary, which took place in March.
“We wanted to build the theme for the concert around a really influential person from Weehawken,” Turner said. “That person was Jerome Robbins.”
By the end of his acclaimed career, Robbins received five Tony Awards, two Academy Awards, and numerous other honors.
HRPAC’s summer concert series will feature “Sounds of Brazil,” “Folklore Urbano,” and more throughout the summer. For more information on HRPAC, please visit www.hrpac.org.
Sean Allocca can be reached at editorial@hudsonreporter.com