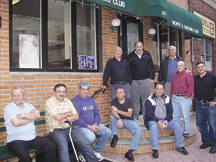 Keeping tradition alive is not easy, and compromise is not always an option. But it is compromise that has kept tradition alive and well at the Monte San Giacomo (MSG) Club, 531 Adams St.
The Italian men’s club that began in a basement with seven immigrants in 1935 slowly took the lead in a shifting cultural landscape of Hoboken.
Almost 75 years later, as well-amenitied condos pop up around the small storefront vestige of “Old Hoboken,” the club is burgeoning with 106 members and carefully navigating modern times with an eye on the past.
Carmine Percontino, president of the MSG Club, personifies the change that the club is undergoing, while Chairman Frank “Uncle Frank” Castella, one of only four immigrants left there, is making sure the traditions aren’t left behind.

Seven men in a basement

The club began with seven immigrants from the Alpine town of Monte San Giacomo (literally “mountain of Saint James the Apostle”) in the Salerno province who came to Hoboken to join the ranks of the working poor in the early 1900s.
To this day, the men’s club accepts only San Giacomese immigrants, their direct descendents, or those affiliated through marriage to the same.
Hoboken was not yet a predominantly Italian community; Irish and German immigrants still held large swaths of town. “We were not popular,” Percontino said recently.
Immigrants faced hardships and language barriers that affected their family, work, and the practice of religion.
When St. Ann’s Church, Seventh and Jefferson streets, was built in 1905, the structure’s style and dimensions mimicked those of the Church of St. Ann in Monte San Giacomo, Italy.
“When it was built, members definitely influenced the building,” said Percontino as he gave a side-by-side image comparison. “The bell tower and the altar are almost identical.”
Most notable is the similarity between the steps of the church in Italy – roughly 135 wide steps that lead to the church’s position at the highest peak in the town – and the much smaller version at St. Ann’s Church in Hoboken.
The steps in Hoboken are most crowded during the Feast of St. Ann, the summer celebration that evolved from another Monte San Giacomo tradition. In fact, the festival in Hoboken honors first the Feast of St. James (San Giacomo) on July 25, then the Feast of St. Ann on July 26.
The club ran the festival until turning the reins over to the church in 1950s.

The San Giacomese men created the basement club at Fourth and Jefferson streets as a haven for their culture, and their wives formed an auxiliary group that still meets monthly.
Castella, who joined the club in 1952, said, “It’s my second home.”

“With every nationality, every religion, things get lost along the way.” – Carmine Percontino
________

On Saturdays, they have dinner for the entire membership. During the week, they play cards, watch sports, and take turns tending bar.
Before, they would watch soccer and baseball. Now, Monday Night Football is the big draw.
They bought their space on Adams Street in 1946 and had a bocce ball court in the back until renovations expanded the interior and annexed the court space.
Some traditions, like the annual “Mrs. San Giacomo” beauty pageant, have been lost.
“Every Sunday morning at 8 a.m. we would hear the church bells,” Castella said, until condo owners complained about the noise and there went another tradition.
“With every nationality, every religion, things get lost along the way,” Percontino said.
“Things get lost little by little,” Castella said, “inch by inch.”

Membership is still high – 106 members, down from a peak of 115 – but the group is changing rapidly.
“A lot of the old members have died,” Castella said. All of the members used to live in town, Castella said, mostly blocks apart, but now they’re all over the region. Only 35 members are still in Hoboken.
Even the president lives out of town and said it can be hard for him to find time to get to the club, even though he loves it.
He discusses the possibility of being less stringent in their membership requirements, like the possibility of other Italian immigrants entering. But Castella is not wavering on this point.
“You want this thing to keep going,” Percontino said. “You have to do it.”
Even with the old rules, some of the new members aren’t Italian, Percontino said. Some people of other ethnic backgrounds have married people from Monte San Giacomo and can become members that way.

Percontino thinks membership might continue to shrink.
“This club passed up some golden opportunities,” Percontino said, pointing out that they could have invested in more real estate in town. He said members may have been afraid to invest their “out-of-pocket” money, or internal politics may have gotten in the way.
“Just recently we faced the same thing again,” he said. The building owner from an adjacent property offered to merge spaces with the club, Perfcontino said, increasing top-floor capacity for the condos and increasing bottom-floor space for the club.
“I think it was a missed opportunity again,” he said. Obviously the members didn’t agree when they voted against the measure.
Membership fees are $120 per year, and that just barely keeps bar costs low. It would take more members, or higher fees, for a facility upgrade, Percontino said, but he’s not sure that either could occur.
“For me it’s the emotional ties,” Percontino said. “You want them to feel where they came from: seven guys who had nowhere to turn to, seven guys who had no friends.”
Timothy J. Carroll may be reached at tcarroll@hudsonreporter.com.