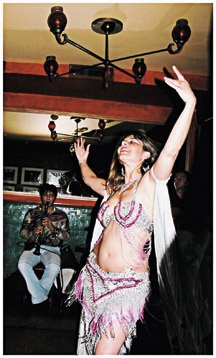 Birnur Siren sounds like the sexy, made-up stage name of an exotic dancer.
In fact, it is the erotic-sounding real name of a local instructor and practitioner of what is commonly known as belly dancing.
Siren is one of the main organizers of the Jersey City-Hoboken Bellydance Meetup, a local internet-connected group of more than 500 students and teachers of what longtime aficionados prefer to call Middle Eastern or Arabic dance.
She also teaches one of her several weekly classes in the New York-New Jersey metropolitan area at Hoboken’s Monroe Center for the Arts.
She is also one of 40 or so headliners in a huge event called Hafla Habibi scheduled for Sunday, June 28 at the Journal Square Café in Jersey City. There, performers will twist, gyrate, and/or just plain shake what their mamas gave them.
Siren, a native of Turkey, sees what she does as more than just keeping alive an ancient art form. She made her first foray into what was called raqs sharqi (oriental dance) 13 years ago.
“I feel like I can help women not only enjoy dancing, but help them with their emotional and physical health,” Siren says, “to start feeling more comfortable with themselves.”

A lot to stomach

Belly dancing techniques involves circular movements such as a “hip circle,” or with the rib-cage known as a “chest circle.” Shoulder or arm movements are utilized to accent chest or belly movements. Shimmering costumes including flowing silk shawls, skirts, and veils with headbands and jewelry are used by performers.
The dance has its origins in southern Iraq in ancient times and spread as far as Turkey and Greece. It was known as a dance performed primarily by women although men then and still do perform as well.
“Belly dance” is a translation of the French term Danse du Ventre, or dance of the stomach, based on their observations of the dance in the Middle East and North Africa during colonial times. The English term was coined at the 1893 World’s Fair in Chicago, where it gained widespread attention.
For the first part of the 20th century, the dance became prevalent in the United States in vaudeville and modern dance performances, as well as in frequently inaccurate portrayals in movies. But starting in the 1950s and in the present day, cafes and nightclubs run by owners from Middle East countries sprang up such as Club Ibis and Cedars of Lebanon in New York where expert belly dancers such as Basmah (one of the original organizers and current artistic advisor for Jersey City-Hoboken Bellydance Meetup), Noora, Majda and Tashida were the star entertainers. Soon, they became teachers of the dance form.

Now, the dance is flourishing all over the world through exposure from such luminaries as Neena and Veena (the Belly Twins) in their various instructional videos and Columbian pop star Shakira. And there’s Birnur Siren.

Siren grew up in the Turkish capital of Istanbul seeing many a belly dancer perform. But the only dance close to her heart growing up was classic ballet. Once she settled in the United States, she was not a prima ballerina, but worked in marketing.
She recalled with a girlish laugh and ebullient voice how after taking a class, the dance took hold of her life.
“I am thankful that belly dancing came to me,” Siren says. “When I first started, I was determined to become a professional.”
Soon it was eight hours a day of practicing and finding a new career to pursue her “personal expression.”
Siren does not take offense to the term “belly dancing,” finding that it is an appropriate term for the movements that are carried out and because of the positive results that come out of the dance. It is known for strengthening arms, abdomen, and oblique muscles, and is taught at health clubs.
What Siren blanches at is the common misconception of belly dancing as a sexual dance.
“It’s seen as too sexual or as dancing to seduce men,” Siren says. “Any dance form is seductive, but I see belly dancing as common dancing like the salsa is to Spanish countries.”

Hip to the music

Sometimes it doesn’t require a large gathering to exhibit one’s skills in belly dancing.
On June 14, Downtown Jersey City resident Emelene Lavender, who teaches the dance at both the Grassroots Community Center on Coles Street and at Club H on Christopher Columbus Drive, performed a recital at Grassroots with three of her students.
Jackeline Martinez, Susan Justiniano and Maribel Mercado showed off their moves as a group learned from a six-week course at Grassroots. Then Lavender and Martinez did solos.
During breaks and after the recital, the 20 or so attendees did social dancing to the Arabic music that accompanied the performances.
Martinez remembered her interest sparked as a child by seeing a dancer on TV in her native Dominican Republic. But it wasn’t until three years ago that she started taking classes, and the recital was her debut with Martinez decked out in a stunning red and black outfit.
“You learn a lot of control of your body, and you are always learning because you never learn everything,” says Martinez, who looks to be a part-time performer.
The recital was also Lavender’s last demonstration of her craft as she was traveling in the near future for a two-month stay in Cairo, Egypt to study belly dancing and musical performance.
After 10 years, she still finds purpose in her practice.
“It is what a student told me recently after class – ‘My soul feels good after dancing,’ ” Lavender says. “That’s exactly the reason.”

The more the merrier

Hafla Habibi will be held on June 28 at the Journal Square Café, 2881 Kennedy Blvd., second floor in Jersey City. The five-hour belly dancing showcase will take place from 4 to 9 p.m., and the event will include not just dancers but also vendors. Doors open at 3 p.m.
There also be gift certificates and other prizes granted to lucky attendees. The event is organized by the Jersey City ~ Hoboken Bellydance Meetup and NYC Arabic Club and sponsored by the Journal Square Restoration Corporation.
Tickets and food-beverage minimum: $20 cash at the door or $15 for advance tickets using checking account, major credit/debit cards, or through PayPal. Visit http://www.meetup.com/bellydance-nj/ to RSVP and pay for the event.
For more information, contact BrightMoment at (347) 789-7508 or brightmoments@gmail.com or Birnur at: birnurdance@yahoo.com or (646) 373-0337.
Attendees are asked not to bring video cameras except cell phones, but can bring digital still cameras.
Ricardo Kaulessar can be reached at rkaulessar@hudsonrreporter.com.