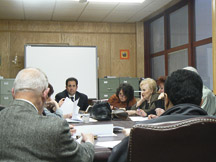 North Bergen and Guttenberg’s school district budgets were both passed on April 1 by their respective school boards, but if past history is any guide, the public may vote them down on April 21.
For North Bergen’s $111 million budget, taxpayers will be levied $39 million, up $1.5 million from last year, said School Business Administrator Steven Somnick. The rest of the budget is funded by state and federal aid. Board Attorney Joseph Ryglicki said for a home worth $130,000, this would mean $11 more per year in school taxes.
Guttenberg Schools Business Administrator Jolene Mantineo said that for Guttenberg’s $14 million budget, their tax levy of $8.7 million is up 2 percent, $158,000 more than last year, meaning a very slight school tax increase for property owners.
Both municipalities are receiving increased state aid. North Bergen received $56 million, a five percent increase. Guttenberg received a total of $4.7 million this year, up slightly over last year’s $4.6 million.
“Whether or not the voters approve the budget [is another story], which hasn’t happened since the ’70s,” said Somnick of North Bergen.
If the budgets are rejected by the voters, both municipalities will have to work with their municipal officials to make reductions before final approval by each town’s governing body.
Mantineo has already met with Guttenberg Mayor Gerald Drasheff to discuss line items.

Guttenberg only has one K-8 school, Anna L. Klein. The high school students go to North Bergen High.
Mantineo said running an election is extremely costly in a district so small. Printing, publishing, hiring election workers, and paying for Town Hall employees’ overtime can cost more than $40,000.
“Through the years, since I’ve been here, every time I had extra money, I put it in our year-end surplus account and use it the following year to offset taxes,” said Mantineo. “It keeps us alive.”

At North Bergen High School, the main office, guidance, and health offices will be expanded. The new extension will modernize those departments, and create a computer kiosk in guidance where students will be able to research colleges. The project is expected to cost around $1.5 million, said Somnick.
The board also plans to resolve numerous problems throughout the different schools. A new classroom will be built to house some of the special education students whom the district currently sends to other schools. The classroom will house 8 to 10 students out of the 82 students who are currently sent out of North Bergen. This is expected to cost around $500,000.
“This way we can keep kids in district, rather than sending them out,” said Somnick. “It will save us money in the long run.”
The main electrical switch will also be replaced in the high school. The switch controls all of the electricity in the building. The last time the district encountered a problem with it, they had to fly in a technician from Canada. Replacing the switch will cost around $600,000.
New windows will be installed at Franklin and Lincoln schools to the tune of $1.9 million. Solar panels will be installed on the roofs of Robert Fulton, Horace Mann, Kennedy and Lincoln schools, with the district paying around $3 million, $1.8 million of which will be funded through a grant. The four roofs will create around the same amount of energy that the high school currently makes with its solar panels.

Mantineo said that Guttenberg’s $14 million budget increased 1.3 percent from last year. She said the district’s additional state aid this year and her year end surplus helped offset the increase.
Mantineo said one of the district’s largest expenditures is paying for Guttenberg students to attend North Bergen High School. It accounts for 24 percent of their budget. This year the per-pupil cost rose from $9,600 to around $12,000.
Despite rising tuition costs, the budget provides for new programs for students at the Klein School. They include a new language arts curriculum which will be linked to social studies, a new science curriculum for middle school students, the purchase of books that will link subjects together, an extension to the 100 book challenge for third and fourth graders, and a vision program for students in grades fifth through eighth that will “enhance” multi-language development.
Tricia Tirella may be reached at TriciaT@hudsonreporter.com.