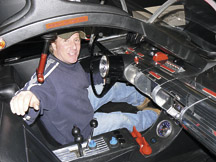 Everybody has seen those bumper stickers – always affixed to some beat-up jalopy – that read: My other car is a Porsche. Generally, those stickers are meant to generate laughs.
Angelo Marra II could put a sticker on his nondescript black van that reads: My other car is the Batmobile – only in his case, the bumper sticker would be true.
Like most kids who grew up on Schoolhouse Rock and Hanna Barbara, Marra was a Diehard fan of the “Batman” TV series that ran from 1966 to 1968. He was hooked on all of it. The fight scenes – POW! BAM! The purrrrrrfect tension between Batman and Catwoman. And that car.
“To me, the car was the coolest, most amazing thing,” Marra recalled last week. “When we were kids, we would watch the show and play Batman and Robin. But the car was the biggest attraction for me because the Batmobile was basically a character on the show.”
Growing up in Secaucus, with a towel knotted around his neck, Marra never thought he’d one day own “the ultimate car.”

A body in the garage
It started as a joke.
An avid car collector, Marra said he “used to say to the guys on the job, ‘I’m going to get a Batmobile.’ And it was a joke because the Batmobile is just one of those things you never expect to own.”
Five years ago, though, he decided to get in touch with Bob Butts, who did car restoration work for George Barris, creator of the original Batmobile for the television series. Barris had made three fiberglass replicas of the original car that were used for promotional appearances. A fourth replica that remained unfinished was sitting in a California garage.
“When I tried to reach out to Bob Butts, I found out that he had passed away,” Marra said. “I ended up talking to his wife and I told her what I was looking for. Just so happened, she said there was a Batmobile body sitting in her [late] husband’s garage.”
Marra, who owns several collectible automobiles, ultimately bought the 20-foot-long body, which had to be mounted to a moving chassis and customized. Marra enlisted car restorer Mark Towle, who specializes in restoring replica Batmobiles, to build the car for him.

Fancy, but can he drive it?

The finished result features a roll top dashboard, tail exhaust pipes that spit fire, and a beacon light – all true to the original.
Marra’s Batmobile, however, does have some inauthentic flourishes. He replaced the original 8-track player with a DVD player that loops – what else – old episodes from the “Batman” TV series. Marra altered a gear shift that allowed the original Batmobile to make quick 360-degree turns. (Marra’s gear shift is red; the original was gold.) The Marra Batmobile also features autographs from Barris, Adam West (who played Batman on the series), and Burt Ward (who played Robin).
Marra occasionally drives the car for fun, though don’t expect to see him running errands with it. After all, no one ever saw Batman using his car to pick up the dry cleaning.
Marra said he mostly drives the car to fan conventions at the Meadowlands Expo Center.
“I take the Batmobile around to different shows. That’s how I met Burt Ward, Adam West, and Yvonne Craig [who played Batgirl],” he said. “Through the car I’ve become friendly with some of the people from the show, and even people who weren’t on the show. Just last weekend I was with Butch Patrick [who played Eddie Munster on “The Munsters”]. I got some photos of him in the car.”
He often donates the Batmobile to charity events for the Make Wish Foundation, the DARE program, and the Walk for Autism, among other events. Locally, the car usually makes an appearance at the annual Library Fair and Book Sale.
“He rarely says no to charity events,” said Marra’s father, also named Angelo, who co-owns Marra Drugs.

Last month, the library featured a display of other Batman memorabilia Marra owns. Ironically, he didn’t collect most of those items until after he bought the car.
“Before I bought the car, I’d collect toy Batmobiles and miniatures of the car, but I didn’t collect movie posters, autographs, and Batman dolls until recently,” he said. “For me, it was it was always about the car,” he said. “It’s the ultimate collector’s item.”
And just where does one store the ultimate collector’s item?
Without a hint of jest, Marra responded, “In the Batcave.”
Reach E. Assata Wright at awright@hudsonreporter.com.