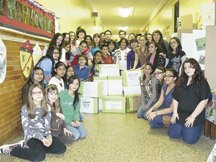 The peer leadership group of the Weehawken School District called out for help, and they were answered. Since September, these sixth grade students at Theodore Roosevelt School have been running the Peer Leadership Children’s Book Drive, collecting books for student victims of Hurricane Ike, which devastated Sante Fe, Texas last September.
“We were collecting books for the schools in Sante Fe,” said Nagham Dahbul, 11. “We are trying to help them after the terrible loss of their schools.”
Their teacher and peer group coordinator Jill Barbarise told her students about the devastation after Hurricane Ike in the Sante Fe School District, which had to close down schools due to unsafe conditions, including a roof collapse.
“Nothing is left,” said Barbarise. “Not a school building, not a desk, nothing because of Hurricane Ike.”
“We decided to do the project because it’s important for [everyone] to get an education,” said Patrick Flores, 13.

Jill Barbarise’s Sixth Grade Peer Leadership Group of approximately 40 students perform annual community service projects, and this latest undertaking will be their major project for the year – and perhaps their last ever, due to budget cuts.
Barbarise first learned about the devastation to the Sante Fe School District from her own graduate student classmates at North Central University in Arizona, where she takes courses online. Barbarise was inducted into the Honor Society, and they were collecting funds for the Sante Fe School District.
“I run the peer leadership group in [Weehawken] and the sixth graders look for ways to help the community,” said Barbarise. “My group does a lot of community service.”
Barbarise has been the facilitator of the district program for about 25 years, and every year the group takes on a large community service oriented project. Last year, the kids sent packages and supplies to soldiers in Iraq, and after 9/11 the group made boutonnieres and brought them down to the recovery workers at Ground Zero.
“When India got hit by the tsunami, we collected blankets and brought them to the [Shree Swaminarayan Temple],” said Barbarise.
For the book drive, Barbarise spoke to Assistant Superintendent of Schools Phyliss Coleman in Sante Fe, who expressed her gratitude and gave the go ahead for the project. The kids went to work over the next three weeks, passing out flyers and acting as ambassadors to the other schools and the library.
“We brought flyers to the schools in Weehawken, and we put them around the schools and the library,” said Michelle Ling, 12.
The students had book drop-off sites in three locations: Roosevelt School, Daniel Webster School, and the Weehawken Public Library. People donating books were asked to bring books of all grade levels in good condition.
“We collected little books for kindergartners to [books for] sixth graders, and chapter books, novels,” said Jerry Lopez, 13.
Students have been meeting everyday for the project, and taking on different responsibilities such as classroom delegates, packers, school and library coordinators, as well as other duties.
Barbarise and her students received a lot of help from Principal Anthony D’Angelo, and from Webster School Principal Anthony Colasurdo, Weehawken Superintendent of Schools Kevin McLellan and Library Director Phillip Greco.

According to Barbarise, the students collected about 500 books – of all genres – which stack up to about 36 feet high.
After attempts to reach several service organizations to help cover shipping costs from the east coast to Texas were unsuccessful, Barbarise contacted her brother Robert Leone, who is an attorney for Lanier Law Firm in Houston, Texas.
“We couldn’t find anyone to pay for the postage,” said Barbarise. “My brother is a lawyer in Texas. His firm is going to pay for the shipping.”
The 500 books collected will be shipped out no later than this coming Monday.
Sadly, this will be the last major community service project for the peer leadership group, since funding has been cut due to economic hard times, a setback happening to many school districts throughout the state.
“It saddens me that the peer leadership program is gone, because it’s such a great program and the kids love coming,” said Barbarise.
Regardless, the students of the Peer Leadership Group are proud of the work they have done over the years, and are grateful for the chance to help others at least one more time.
“We’re proud that we accomplished our goal,” said Rafaela Andrade, 14.
“They know they are doing something great,” said Barbarise. “Community service and giving when you may not have [something] yourself is a lesson that cannot be taught in the classroom.”