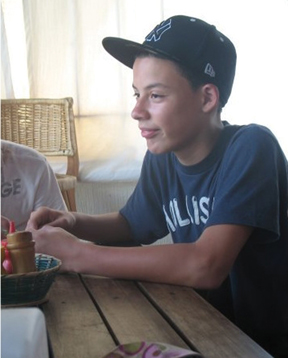 In writing about his pride in Hispanic culture and what it means to be Latino, a Union City teen recently won first place in a tri-state area essay contest.
Isiah Cruz, 13, competed with seventh and eighth graders from all over New Jersey, New York, and Connecticut. He won a laptop; second and third place winners received an iPod or portable DVD player. The contest was sponsored by Cablevision through its education initiative, Power to Learn, which offers kids’ programs that combine technology and learning. Essays were limited to 1,000 words.
Cruz said he wrote the essay in celebration of Hispanic Heritage Month last fall, when the essays were due. The winners were announced last month.
“I am Hispanic, and I thought it would mean something for Hispanic Heritage Month,” said Cruz.
His eighth grade teacher, Barbara Ramirez, said that Cruz took the initiative to enter the contest.
“He did everything on his own,” said Ramirez. She added that he did all the research, wrote several drafts, and even got peer input on how to improve his essay.

“Isiah is the type of student that really has that drive,” said Ramirez. “He likes to go way beyond the limit. He was the heart and soul of this.”
Cruz said he was also motivated by the enjoyment he finds in writing.
“I love writing,” he said. “I am always writing. I am really good at poems. I like short stories. Whenever I take out time to write something, and I say it is going to come out good, it comes out good.”

Hispanics, Cruz said, are a diverse group of people with a common language and culture.
In his essay, Cruz wrote, “Any Latino would know about a nicely cooked ‘arroz con frijoles y platanos’ or even ‘arroz con papa.’ ”
Though these may be popular rice dishes in many Latin American countries, they are sometimes pronounced differently depending on location, said Cruz. He added that his Columbian mother and Puerto Rican father say “arroz” (the Spanish word for “rice”) differently and that the family often jokes about it.
Cruz said that his own favorite Latin American food is a typical Columbian soup called “ajiaco.”
“It’s like a really traditional soup, and it is a mix of potatoes, chicken, and sometimes we put cream in it, a bunch of stuff,” he said.
He said that he is very familiar with Colombian traditions, and Colombia is the Latin American country he has visited the most because he has lots of family there.
“They have a beautiful landscape,” said Cruz.
He added that Colombia is mountainous and has varying average temperatures depending on the altitude. “You go to certain places and it’s hot; you go to certain places and it’s medium,” said Cruz.
He added, “People you might not even know say ‘Hi. How are you? How are things going?’ Everyone is just so nice.”
Union City, where he lives with his parents and sister Veronica, 8, is more urban than places he has been in Columbia, said Cruz. However, at home, he said he has everything he needs.

Right now, Cruz attends Woodrow Wilson School. In the future, he wants to be either a mechanical engineer or a lawyer.
“I have always liked that type of stuff, engineering, building stuff,” said Cruz. Once he found a way to keep pigeons off his balcony, he said, by pulling his loud Tonka truck across it with a string he held from inside his home. The noise scared the birds away.
His aspiration to be a lawyer, said Cruz, was inspired by his ability to argue.
“We’ll do many debates in school and we’ll make believe we are lawyers,” he said. “I am very persuasive and good at arguing.” Cruz added that in order to win a debate, he first imagines what the other side will argue, and from that, he develops his own side.