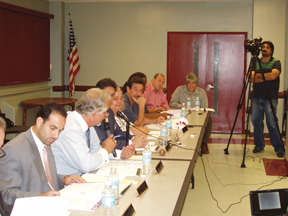 In a mile-square city where residents are trying to preserve every remaining open space, it may be difficult to comply with a recently-released state mandate for towns to tell how they will add hundreds of units of affordable housing by 2018.
The mandates came this past summer as part of the third round of an affordable housing initiative spearheaded by COAH, the state Council on Affordable Housing, and over 300 municipalities across the state were told to submit plans for review.
Municipalities were scrambling to prepare a plan before the Dec. 31 deadline. Only towns like Hoboken that had participated in the first two rounds were required to comply.
Among other things, participation in the initiative earns a municipality state protection against “builder’s remedy” lawsuits, or legal action taken by developers who want to build (and get subsidies) for affordable housing in a town that doesn’t want any (for instance, a suburban town that might not want low-income residents). A town that describes how it will meet state requirements will be seen as complying with the COAH guidelines.
The most recent round of COAH regulations require a municipality to provide one affordable housing unit for every four market-rate units built in the future, plus one affordable unit for every 16 newly created jobs in the area.
For this reason, the towns near the Meadowlands are being asked to add hundreds of units because of all the jobs that will be created nearby at the Xanadu complex. For instance, last month, Secaucus submitted its plan listing a host of places where they would put affordable housing if they are required to do so.
But Hoboken, because of its present affordable housing stock, submitted its plan saying they largely meet the mandates already.
Still, the city plans to enact an ordinance requiring 20 percent of any new development that requires a “D” variance from the city Zoning Board to be set aside for affordable housing. “D” variances allow for residential use of the land and permit high density development.
If the developer does not wish to provide the housing, they may pay a fee to the city to be deposited in the Affordable Housing Trust Fund.
The share of affordable units needed to comply is determined by using projections of future demographics. The planning firm of Phillips Preiss Shapiro prepared the plan for Hoboken.

As part of the plan, the council will vote on an ordinance to require developer fees once the state approves the measure. The council submitted the wording of the ordinance to the state via a resolution passed at their last meeting.
The fees will be placed in an interest-bearing Affordable Housing Trust Fund and used according to COAH guidelines to fund future affordable housing improvements and development.
According to Fred Bado, city director of Community Development, the developer’s fee is determined by multiplying the equalized assessed value of the development by 1.5 percent for residential and 2.5 percent for non-residential.

The shares of affordable housing required by COAH are in three parts: growth, rehabilitation, and prior round obligation.
Rehabilitation shares are the amount of affordable housing units the city is required to rehab in order to comply; growth shares are the amount of units required in line with continued development and job creation; and prior round obligation shares are those remaining from the first two rounds of affordable housing requirements outlined by COAH.
Hoboken is on the hook for 419 “rehabilitation shares,” 250 “growth shares,” and zero “prior round obligation” shares.
Hoboken was designated by the state as an Urban Aid Municipality, or a special urban area that qualifies for state aid, and therefore was not required to provide any shares of affordable housing during the previous two rounds.
Rather than come up with plans to build hundreds of additional units, the city is asking the state to credit 1,064 units of affordable housing that already exist.
If the state approves their plan, the city will use the credit of 1,064 shares to offset the 250 growth shares required and still have an 814 share credit to retain for the fourth round beginning in Jan. 1, 2019.
The 419 rehabilitation shares may also be reduced by credits earned by the city, although they have not yet calculated how many credits they will ask for. The city did mention in its plan a $10 million bond issue used for renovations by the Hoboken Housing Authority in 2006.
The plan also said that the 419 shares “overstates” the number of substandard units in town since the city does not track renovations made to privately owned affordable housing complexes.
Otherwise, the city will use the collected developer fees to fund an improvement project.
The state requires the city to invest at least $10,000 per unit to bring older buildings up to code, correct any other deficiencies, and fund any major system rehabilitations.

Bado said the city Planning Board is also reviewing the plan and that the state may take awhile on their part, since they must review plans submitted by more than 300 municipalities.
COAH is an affiliate of the state Department of Community Affairs. Commissioner Joseph Doria said in a press release that the state hopes to also make the affordable development “green.”
“COAH staff looks forward to working with [the municipalities] on their plans to ensure that housing is not only provided in an affordable manner, but in an environmentally sound one as well,” he said.