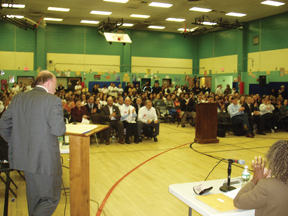 For the school board and the teachers union, the third time was a charm. The two groups finally came to an agreement last week on a new three-year contract for 250 teachers, clerks, and other employees.
The new contract gives them a 4.3 percent raise in each of the next three years, but also forces an increase in prescription co-payments and adds two days to the work year.
More than 300 people came to the meeting to talk about the contract and about a controversial dual-language program at the district was considering for the younger children (see sidebar).
The first iteration of the new contract was struck down by the board because the board was not comfortable with the agreement that Superintendent Jack Raslowsky had negotiated, which included a 5.7 percent raise. It also included a half hour of additional class time each day.
The second version was negotiated by the board, but was also nixed when board member Phil DeFalco announced at a meeting in October that the agreement he was asked to vote on at the meeting was not what the Negotiation Committee had agreed to.
This time around, Raslowsky sat in on negotiations but let the board members lead the discussion – and a deal was finally struck.
At the crowded meeting, Raslowski guaranteed that the deal would not cause a school tax increase nor would it force the district to exceed the state mandated budget caps.
“I understand the frustration people have with the budget situation in this town,” Raslowsky said.
DeFalco, who voted in favor of the contract, said at the meeting that he was not happy with the way the union distributed the raise among its members. Raslowsky said allowing the union to distribute the raise was a part of negotiations.
But some residents believed the pay raise was too large in an economic climate where so many are struggling to get by.
“Be thankful you’re bringing in a paycheck,” resident Brian Wagner said at the meeting. “I’m sorry, but you have to feel the pain that the rest of us are feeling in the private sector … Many of us are who stood here tonight are unemployed or will be shortly.”
Jean Marie Mitchell, Calabro School P.T.O. president, said in response, “I don’t want these teachers to be subject to the pain we are out here.”
Teacher Elise Granovsky said, “I understand the costs are high, but so are the stakes.”
In addition to DeFalco, board members Carmelo Garcia, Frank Raia, and Frances Rhodes-Kearns voted in favor of the deal, while Carrie Gilliard, Theresa Minutillo, and Rose Markle voted against it.
Board member Jim Farina’s wife is employed by the district, so he was not able to vote on the contract. But Farina wore a t-shirt distributed at the meeting by the union to show his support for the deal.

“It’s not a perfect contract. But for the teachers and for the community, I think it’s a fair contract.” – Phil DeFalco
________

DeFalco said the district will see savings of $735,000 in the first year of the contract as compared to what was budgeted, no tax increase in the second year, and, although it is hard to predict, an over-expense of $100,000 in the third year.
“It’s not a perfect contract. But for the teachers and for the community, I think it’s a fair contract,” DeFalco said.
Many residents asked the board to be cautious awarding a lucrative deal that could leave the board hamstrung in the future. Many other opposed the deal altogether.
Union President Gary Enrico said the teachers still need to vote to approve the contract as a formality. He said that if the contract had failed, the union would have filed a job action grievance.
The board had moved the meeting to the Wallace School gym to accommodate the more than 300 guests in attendance.
Almost half of the room was filled with union members, and many spoke before the board, asking that they get the raises they believed they deserve.

Newly-elected County Freeholder Anthony Romano resigned his seat on the board at the meeting because it would have been in conflict with his new position.
“I’m not going away,” Romano said. “I will still be here and involved.” He backed it up by staying through the meeting, which lasted more than four hours.
The board thanked the Hoboken police captain for his service and explained the procedure for finding his replacement.
Board attorney Joseph Morano said the board will advertise for applications to the board. Members of the board agreed to interview the applicants in front of the entire board as opposed to assigning that task to a committee.
An applicant will fill the seat until a new candidate can be chosen during the school board election on April 21.

HoLa program not gone yet

Some of those in attendance for Tuesday night’s school board meeting were there regarding a controversial dual-language program that has been proposed for the younger grades. Some parents believe the program is a luxury in these financial times, and a misallocation of resources when the test scores at Hoboken High School are so low. In addition, the district did not receive competitive bids for the contract to run the program.
In November, the board had voted to approve HoLa, but was caught in a procedural mess when it was determined that they should have sought bids for the program consultants.
Since the two local women who pitched the idea did not have a legal entity created before the vote, the board was off the hook for the contract. In fact, the board’s lawyer, Joseph Morano, sent a letter to board members and district officials on Dec. 31 warning that the board would “incur litigation” if they proceeded with the program, and the district finally heeded his warning.
They will most likely vote at the next meeting to rescind the original measure, according to Morano.
Program creators Camille Karschun Bustillo and Jennifer Hindman Sargent have since volunteered to offer their services for free.
The contract would have provided $150,000 for their guidance of the program.
Program backers are pushing for the program to be implemented before the school enrollment deadline of Jan. 21, but many board members believe more research and community outreach should be done before the board creates the intense language program. – TJC