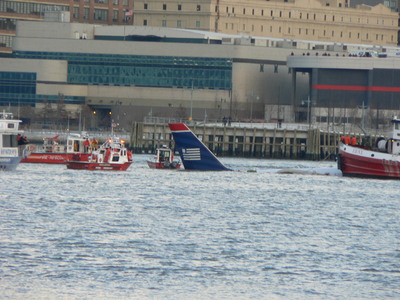 A US Airways jet crash landed in the Hudson River along the Weehawken waterfront after striking a flock of birds shortly after takeoff, reports said. All 148 passengers and five crew members were rescued and the injured were taken to area hospitals, including approximately 60 passengers to Hudson County, after surviving the “Miracle on the Hudson.”
The plane, US Airways flight 1549, took off from LaGuardia airport at 3:26 p.m. Thursday (Jan. 15), heading to Charlotte, N.C. The Airbus 320 was flying at approximately 3,000 feet when trouble was first reported. The plane was en route back to LaGuardia, but was forced to crash land in the river.
Only minutes after plunging into the river, numerous boats converged on the plane, including New York Waterway ferries, Coast Guard boats, and police boats. Some passengers stood on the wings of the sinking plan awaiting rescue.
“I heard what sounded like gunshots in the distance,” said Matt Gogluicii, of Edgewater, who witnessed the plane a few hundred feet over the water, “just sputtering.” The plane landed in the water smoothly and was drifting in the river currents intact.

Ferry boats from New York Waterway were quickly on the scene to shuttle the survivors to safety.
Ferry Captain Vince Lombardi, of Fairfield, was heading toward Port Imperial from the 39th street terminal when the plane “hit the water right in front of his ferry,” said company spokesman Pat Smith.
Lombardi’s vessel, the Thomas Jefferson, rescued 56 passengers from the sinking plane and transported them to the triage center at the Arthur’s Landing restaurant in Weehawken. In total, NY Waterway brought 142 passengers to safety within 15 minutes of the crash, Smith said.
Two triage centers provided immediate medical care to survivors. At Arthur’s Landing, 20 survivors were treated, and wrapped in any available clothing, including table clothes. The triage at the Port Imperial terminal received the remaining 40 survivors.
Eight passengers were brought to Jersey City Medical Center, according to Mark Rabson, spokesman for Liberty Health, and were treated for hypothermia and minor sprains before being released.
An additional five passengers received treatment for similar injuries at the Palisades Medical Center in North Bergen, two of which required overnight observation.
“We were very well positioned for an emergency,” said Eurice Rojas, Vice President of external affairs for the hospital. “It was very encouraging to see how everyone in Hudson County responded to the emergency.”
Gov. Jon Corzine also met with victims, family members, and hospital staff at both Palisades and Jersey City Medical Centers.
“It’s astonishing to think that no one was seriously injured,” said Weehawken Mayor Richard Turner. “It is a testament to the tremendous emergency response personnel we have in the area.”
Those not needing further medical treatment were transported to the Weehawken Nutrition Center. Food, hot drinks, and warm clothing were provided to the survivors by North Hudson communities.
In addition to 70 pairs of socks from Modell’s, the Weehawken Sheraton supplied over 130 blankets to the rescue efforts.
After being accounted for by New York City and Weehawken police, the survivors were transported by buses back to LaGuardia. Three survivors were taken home to Manhattan by Union City police vehicles.
“NY Waterway has transcended from being a form of public transportation,” said Mayor Richard Turner, “and are now a vital part of the emergency network.”