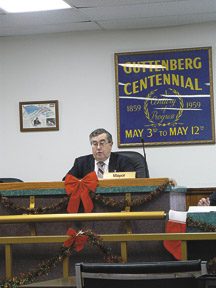 After missing more than a year’s worth of Guttenberg’s Joint Planning/Zoning Board meetings, Melanie Henry may be replaced at the next council meeting, officials said last week.
Because Guttenberg is a small town, its planning and zoning boards are combined. The board rules on whether a development proposal conforms to existing zoning guidelines, and also votes on changes to the guidelines.
Planning/Zoning Board Attorney Maria Gesualdi said last week that Henry had missed meetings for more than a year even after the board made “efforts to reach out to her.”
According to the Municipal Vacancy Law, if a member of a board, committee, commission, authority or other agency fails to attend either eight consecutive weeks or four consecutive regular meetings without being excused, their seat should be considered vacant after that person has been contacted in writing about the absences.
On Nov. 3, 2007, Henry was asked in writing by Planning/Zoning Board Secretary Joseph Muniz to give a reason for her absences or to forward a letter of resignation, according to the letter.
A letter on July 23 to then-interim Mayor James Hannon and the Town Council from Brian Chewcaskie, a contracted attorney to the zoning board, notified the officials that Henry had not attended a meeting in the year of 2008.
Mayor Gerald Drasheff said that a Town Council member volunteered a few months ago to speak to her as well. Gesualdi said that other attempts to reach Henry had also been made.
Drasheff said that last week, Henry told him that she had sent a letter of resignation several weeks ago.
“That letter never reached us, with the transition of mayors and the town clerk, it could have gotten misplaced somewhere,” said Drasheff.
Drasheff said that Henry will send another letter shortly, and at the Jan. 26 council meeting, he will appoint a new board member to fill the vacancy.

The Planning/Zoning Board’s five members and three alternates are appointed by the mayor and are volunteer positions.
Drasheff said that Henry is an active person in the community, taking part in activities like organizing the Thanksgiving senior dinners in Guttenberg, and that she may not have had the time to be an active member on the board.
He said that Henry, a lifelong resident of Guttenberg, once lived in public housing, and seemed to be a good fit for the board when she was appointed about three years ago.
“You never really know that until you have someone in the position,” said Drasheff. “People can sometimes take on more than they have time to do.”
Drasheff said that the attendance of board members should be watched a little more closely in the future. He said Henry’s absence “should not have gone on as long as it went on.”

According to Gesualdi, in order for the Planning/Zoning Board to come to a quorum, five members must be present for an affirmative vote.
“At times we have been struggling to come to quorum, and her absence has made things difficult,” said a board member who preferred to remain anonymous. “We’ve always managed to get to quorum eventually. It’s not a nice situation, and we wonder why she just doesn’t resign. Just having her name on the letterhead is no honor.”
Board Chairman Brian Guaschino agreed that the board’s ability to vote had sometimes been impaired.
“She hasn’t been at meetings for quite some time, and I don’t know what the reason is,” said Guaschino.
However, Gesualdi said that when Henry was first appointed to the board about three years ago, she regularly attended meetings.
Efforts to call Gesualdi directly and contact Henry through Drasheff by the newspaper last week were unsuccessful.
Drasheff said that when he spoke to Henry personally, he did not get into the exact details for her absences. He said that the situation was in the past and that he is ready to “move on.”