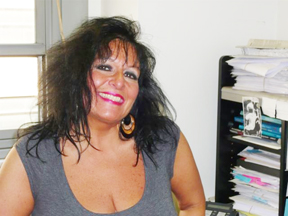 Author Cindy Rosmus proves with her latest collections of short stories that dark fiction doesn’t have to involve vampires and ghosts, because the real horrors are in everyday life.
Rosmus will be unveiling her latest books during a signing at Unique Books, located at 464 Broadway, between 1 and 4 p.m. on Jan. 17.
Although her fiction has often been a vehicle for her to exercise personal demons, in her latest books, this holds even truer than in the past.
As in past volumes, Rosmus continues to recreate the darker sides of reality with stories that span a fictional reality from the early 1960s to contemporary times.
A writer of horror in what is called the hardboiled tradition, Rosmus scripts cutting edge, even risqué fiction that shocks as well as entertains.
In “No Place Like Home,” Rosmus provides 10 new tales of “heart break, homesickness and hell.”
Like the fiction that appears in her previous books, including her award-winning “Calpurnia’s Widow,” these stories present fictional characters against a real landscape of Bayonne and Hudson County, painting a portrait of the dark social life that often plagues the ordinary world.
A Bayonne resident for nearly 25 years, Rosmus said she has been writing since she was five-years-old. An editor of textbooks by day, she takes on a new identity as a writer of gritty, dark fiction during other hours. Though she once delved into writing pornography (which she claims is boring), she explores the darker aspects of the human character through her fictional stories.
Over the years, her work has appeared in diverse magazines from “Oui” and “Just 18” to cult-like underground magazines such as “Hardboiled,” “Devil Blossoms” and “Black Petals.”

Taking on a writing genre normally associated with male writers, Rosmus is not shy in her depictions, often forcing characters into tough, no-nonsense situations from which there is no easy way out.
“This is cutting edge stuff,” she said. “These stories are about normal people who make bad choices.”
While she often sets her stories in the geography over which she has traveled, the stories are shaped out of her imagination, painting aspects of the world that many people choose not to see.
“There is graphic violence in some of these stories,” she said. “But some of them are tender, too.”
But writing for Rosmus has always been a kind of revenge, getting even with the past by creating fictional situations in which things turn out slightly differently from the way they might have in real life.
Born in Newark, Rosmus uses real life situations, but recreates the characters and twists the plot into original stories that no longer have a clear path back to what inspired her.
For this volume, Rosmus has teamed up with a great cover artist named Gin E.L. Fenton – or more popularly known as GinElf. GinElf is an art director and illustrator for several magazines and publishing companies, creating book covers and illustrations for both print and online magazines, and books of all kinds.
GinElf has also created pieces for Rosmus’ online fiction magazine, “Yellow Mama.”
“She is really one of the best illustrators around,” Rosmus said.