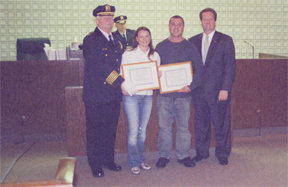 In a ceremony that took place in 2008, the Bayonne Police Department paid tribute to police officers and civilians for extraordinary efforts displayed during a period from mid-2007 to mid-2008.

Police Chief Robert Kubert said the annual honors this year paid tribute to several civilians and police officers who performed duties that helped law enforcement during that period.
“These people make our job easier,” Kubert said.
The police department gives out three levels of awards to officers and civilians for their help during the year: certificates of appreciation, meritorious police service awards, and awards for police service excellence.

Steven Mazzucola, a civilian city employee, received a certificate of appreciation for helping to catch and detain several people who were spray painting graffiti in Juliet Street Park in July 2007.
Pietro Deserio and Teresa Capogna, two concerned citizens, also received certificates of appreciation when they witnessed and reported three adults dragging a young child into a weeded area at the foot of W. 20th Street.
As a result, police officers Joseph Kowalski, Joseph Cazapla, Dinao Mattaliano, Paul Newman and Det. Timothy Carey responded, and after hearing the muffled cries for help, they converged on the area to find a 47-year old man straddling a three-year-old girl. The five officers were also recognized for their extraordinary efforts of subduing and arresting the men.
The police were able to apprehend the adults before additional harm could be done to the child.
Eduardo Castro was also honored for his effort to pursue suspects in a strong-armed robbery in February 2008. Although he did not catch the thieves, his pursuit caused one to drop a stolen purse. Thomas Tillson, another civilian, called the police after seeing the criminals run passed his house. His call to the police resulted in the arrest.
Michael Barrett was also honored for calling the police after witnessing a theft of a cash register and lottery tickets from a midtown store in May 2008.
Joanne Marinho helped aid the police in catching criminals responsible for a series of armed robberies at uptown delicatessens when she reported the location of suspects fitting the description of the criminals in March 2008.

The Bayonne Police Department acknowledged the extraordinarily effective work of a task force developed to deal with a spate of burglaries and thefts throughout the city from 2007 to 2008. The task force included the department’s Street Crimes Unit, Detective Bureau and Alcohol Beverage Control Unit.
The task force, led by Capt. James Davis, included Sgt. Kevin Gallagher and detectives Neil Reynolds, Timothy Carey, David Macre, Michael Kubert, Anthony Larwa, Roman Popowski and Juan Betancourth.
During the year, the task force – acting as a team and through the use of surveillance, interrogation, use of informants and other information gathering techniques – brought about several key arrests, breaking up a burglary and motor vehicle theft ring, as well as assisted in the closing down of a large cocaine distribution network operating partly out of Bayonne.