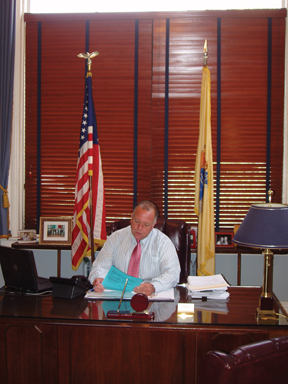 The election for Hoboken mayor and three council-at-large seats is exactly four months from tomorrow, but none of the rumored mayoral candidates have publicly declared they will run – likely because of the continually shifting alliances behind the scenes.
But several of the rumored candidates talked about their alliances and plans last week. And others have sent out flyers and mailers beyond their wards, including Councilwoman Beth Mason and Councilman Michael Russo, making it likely that they will either run for mayor or play a big role in the upcoming election.
This year, city residents had to shoulder an 84 percent municipal tax hike, which led to a 47 percent overall property tax hike (including school and county taxes). The proposed city budget has climbed to $121.7 million, up from $53 million 10 years ago. Last year, the city overspent its budget by $10 million and that sum is being spread out in budgets over the next five years.
Whoever takes over city government will have a lot to sort out, and will likely get criticized no matter how they do it.

Mayor David Roberts said last week that he is “99 percent” sure that he won’t seek re-election. He said two years ago that he would definitely not run, but then hedged on his answer over the ensuing year.
“I have not at all discussed the prospects of re-election,” he said last week. “It would take an extraordinary set of circumstances to get me in the race.”
However, he said he was “concerned” about the field of potential candidates that exists, echoing questions from a number of residents who are not sure who they will vote for.
Roberts said he really hasn’t been preparing to run. “I have not been doing things that a candidate must do,” he said.
Without an incumbent, the election has left itself wide open.

The election will be held May 12. If no candidate receives more than 50 percent of the vote, there will be a runoff June 9.
As for the council-at-large seats that are up, Councilpersons Peter Cammarano, Terry LaBruno, and Assemblyman Ruben Ramos Jr. hold those seats. They represent the entire city rather than just one of the city’s six wards.
The City Clerk’s office is accepting applications to run. Candidates for mayor and for council need to turn in a petition signed by a certain percentage of registered voters, as well as a few other documents, by March 19.

Councilman-at-Large Peter Cammarano, a young attorney, is one of the most strongly rumored candidates. He said last week that he is still “exploring” the possibility of a mayoral campaign.
Cammarano was aligned with Roberts in the last election, but has stepped away from the alliance and heavily criticized Roberts since then. He did remain allied with Councilman Chris Campos, and he ran Campos’ heated re-election campaign last year in which Campos lost to Councilwoman Dawn Zimmer.
If Cammarano runs, he hopes to show the electorate that the state intervention into the city’s finances should have and could have been avoided.
In fact, this could end up being a point of contention among candidates during the election, especially if other council people run against Cammarano. Last May, the council voted 5-4 not to ask the state for a waiver that would have let them increase the city budget outside of the spending cap. This resulted in the state taking over Hoboken’s finances. Ultimately, the state demanded a tax increase to fill a city budget gap.
While some think asking the state for a cap waiver would have meant acceptance of an underfunded and overexpended budget, those like Cammarano believe it would have been preferable to state intervention.
Cammarano, Ramos, LaBruno, and Councilman Nino Giacchi voted in favor of the waiver. Russo, Mason, Theresa Castellano, Dawn Zimmer, and Peter Cunningham voted against it. However, several of the latter group then went to the state to ask them not to take over.
“Every week that goes by, you get more and more evidence that the state takeover was the wrong move,” Cammarano said last week.
Cammarano was widely rumored to be running alongside Ramos, who cannot seek the mayor’s seat without giving up his state Assembly seat. But now Ramos is said to backing away from another term on the council, concentrating on regaining his state-level legislative position in an election year.
Ramos could not be reached by press time.
Cammarano said he has been approached by a host of potential running mates for the council seats and that he will likely continue conversations with them as he makes a decision.
Cammarano said he had fundraising events each of the past two summers, but doesn’t have anything planned for the near future. He also said he was not conducting any polls at right now.

Mason: ‘One way or the other’

Beth Mason, 2nd Ward councilwoman, is another councilperson rumored to be lining up for the job. Mason has made a practice of pushing the city to make records public and for city appointments to be more transparent.
Mason said last week that she had not yet made her decision about whether to join the field, but will do so in the next couple of weeks.
“There are a lot of conversations going on across the board,” she said last week. “I will let [the voters] know as soon as I decide.”
Mason sent out two citywide mailers this past summer blasting Roberts’ spending, and also has employed three paid public relations professionals. Mason said she is continuously fundraising, but said the money is for mailers and other informational material she provides to residents. She said the funding is particularly important to her because she declines her City Council salary. Mason said she will open up a campaign fund soon.
“Lots of people have approached me [about running for mayor],” she said. “One way or the other, I’m going to be involved in this race.”
She said she is working with people in town and looking to assemble a team focused on examining the fiscal health of the city.
But a division among the groups in town calling themselves “reformers” means that Mason may not work with the people she normally votes with on the council, like Councilwoman Dawn Zimmer and Councilman Peter Cunningham.
Mason was criticized last summer by Zimmer and Cunningham for apparently not supporting them during their council runoffs. Mason’s response at the time was that they had gotten help from the county’s oldest political machine, the Hudson County Democratic Organization.
Whom Mason does ally herself with remains to be seen. Zimmer is also a rumored candidate for the mayor’s slot, even though last year she said she would not run and wanted to focus on being a councilwoman.

Zimmer could keep Carol Marsh out

“I am strongly considering it,” Zimmer said last week, when asked if she will run for mayor, “but I haven’t made a final decision yet.”
Both Zimmer and Mason have served on the council for fewer than two years.
Zimmer won her seat last year by pointing out problems in the 4th Ward such as heavy flooding. She confirmed that she has a fundraising event planned in the near future, although it had to be postponed from its original January date. She also said she is in discussion with “many strong potential running mates.”
Zimmer said her decision will be made “very soon.”
One person waiting to hear what Zimmer decides is Carol Marsh.
A former councilperson and mayoral candidate, Marsh pushed Roberts into a run-off election in 2005 and has been on the sidelines of Hoboken politics since falling short of unseating the incumbent.
According to Marsh, she may be on the sidelines for this election too, if someone runs who she can get behind. That person, she said, is Zimmer.
“She has a lot of the same values that I have,” Marsh said. “I never say never, but I don’t have any plans [to run] at the moment.”
She said the upcoming election is a very important one.
“We are going to have to decide what kind of town we’re going to live in,” Marsh said.

Michael Russo, a 3rd Ward councilman who made an unsuccessful run against Roberts in the last mayoral race, is also rumored to be considering a seat.
Russo said last week that he has “no official word yet” on a potential campaign.
The next steps would be to do some polling in Hoboken, continue his year-round fundraising, and keep talking to possible running mates, he said.
Russo presided as Finance Committee chairman over a budget that was overspent by $10 million last year, but has brought several proposed budget cuts to the table at council meetings.
No matter what happens, Russo said, he and Board of Education trustee and local developer Frank “Pupie” Raia will be aligned come the spring.
This is a change from years ago, when Raia was continually at odds with Russo’s father, former Mayor Anthony Russo. And it’s also a change from last year, when Raia campaigned for council against Michael Russo, and his campaign passed out flyers to voters suggesting that Russo would cause the Shop-Rite to close down.
Apparently, things are different now.
“Pupie Raia and Michael Russo are political allies and nothing can come between them,” Russo said. A campaign fund has been set up by the 3rd Ward team of Raia and Russo, he said, but Russo said nothing has been raised by the duo yet.
Raia said last week that his first priority is to get re-elected to the school board in April.
Neither Raia nor Russo would comment on who would run for mayor and who would run for council, but many insiders contend that the two will let a poll decide the order of the ticket.
Politically, Russo often votes with Councilwoman Theresa Castellano, as well as Zimmer, Mason, and Cunningham, and against Cammarano.

Voters may be looking for someone outside of the current political landscape come May, and businessman Scott Delea wants to give these people another option.
For many years, Delea, who has run for council before, has run “Party with a Purpose,” a social group that raises money for charity.
“I am seriously thinking about running,” Delea said last week. “We don’t need any more political grandstanding. What we need is someone who can run this city like a CEO.”
Delea ran as an independent candidate in 2005 and collected a surprising number of votes.
“All of these rumored candidates have too much baggage,” Delea said. “If I see a candidate that can get the job done, I’ll be the first to get in line. But I haven’t seen that.”
He said he may not run as an independent this time around, but that he will keep the “independent attitude” of not being beholden to any group of people.

Turnout and the ‘7th Ward’

Over 22,000 Hoboken residents pulled the lever in the presidential election of 2008, but mayoral elections draw a much smaller crowd.
Turnout in the mayoral election of 2005 between Roberts, Marsh, Russo, Raia, Delea and others was just over 10,000, a lukewarm 32 percent of registered voters. The 2001 election that featured Roberts and Anthony Russo garnered 43 of the voting public.
Many people are expecting a significant turnout in this election given the financial issues.
Delea is calling this expected influx of voters the “7th Ward,” which he said is comprised of new homeowners who have been silent in past elections but are now irate over the city tax hike.
Delea also said that the internet has brought together groups of people who in the past would not have had the means to organize.