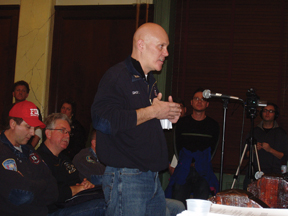 The City Council showed up to a meeting Wednesday night to find that more than 35 firefighters had gathered to speak their minds.
The firefighters and their union representatives were upset about misinformation that they said had been bandied about by residents looking for areas to cut the budget. Right now, both the police and firefighters are in the middle of contract negotiations with the city that will affect a significant part of the city budget.
Anton Peskens, president of the Hoboken Firefighters Union Local 1076, spoke during the public speaking portion of the meeting. He said that the department, in its negotiations with the city for a new contract, is trying to find savings but that the city is “stonewalling” the union.
Peskens said the city was deadset on a layoff plan and a rollback of health benefits and would not listen to alternative savings ideas put forth by union leaders.
Peskens said the department offered up a plan to consolidate some services, promote retirements, and settle grievances that could cost the city money in the future.
“I could have gone there with a million dollar check … and they would have told me ‘no, we’re not interested’ ” Peskens complained. “The conversation then flipped to heath care benefits. I’m going to put [Public Safety] Director Bergin and Judy Tripodi on record right now: they’re not benefits to us; they’re necessities.”
“You’re going to take the benefits I have for the last 23 years, the benefits that were good enough for Director Bergin … the benefits that Mayor Roberts has right now as a retired firefighter,” Peskins added. “To take these away from my guys when they’re that close to retirement is not fair.”

Also at the meeting, the council voted 8-2 in favor of lining the waterfront side of Sinatra Drive with meters from Fifth Street to 11th Street. People will be required to pay a quarter every 15 minutes between 9 a.m. and 9 p.m., Monday through Saturday. The council amended the plan to allow residential users to park in the metered spots for free after 6 p.m. The meters are fillable for up to 12 hours for those who are away from their cars all day.
The west side closest to Stevens Institute will be designated residential parking only.

Councilpersons Theresa Castellano and Beth Mason opposed the measure. Castellano complained that this measure affected the residents, and said there were other revenue increases and spending cuts proposed that did not affect residents as much.
Mason said she thought Stevens Institute students would prefer to find other parking than the meters and would end up taking spots that residents could be using. The revenue-enhancing move was pushed by the administration to make use of 80 meters they have on hand, and to help fill the city budget.

Now that the administration has tracked down old PILOT agreements, the city and council are reviewing records to see whether the city has followed procedures in executing the agreements. PILOT agreements are Payment In Lieu Of Taxes or tax abatements that allow developers to avoid regular fluctuating property taxes, and instead let them make direct payments to the city budget.
At the same time as the council is looking into this, they are being asked to approve a 10-year extension on a PILOT agreement for Church Towers that was created 40 years ago. The tax abatement is one method used to keep rents low for middle-income families in the building.
The building also receives internal subsidies from HUD, the federal Department of Housing and Urban Development. Internal subsidies allow the building owners to limit operational costs as a way to keep rents low for qualified tenants. Some tenants also qualify for Section 8 housing vouchers to cover part of their rent.
The PILOT agreement expired last year. If is not renewed, some people claim the tenants’ rents may double or more.
The city pulled the extension resolution from the agenda to further study the financial impact the PILOT has on the city.
City Director of Human Services Fred Bado said the city will also look at possibly reworking the extension to include a step process to prepare tenants for market-rate rents in 10 years when the extension expires.
Councilman Michael Russo, who lives in Church Towers, had sent out a letter early in the week to rally support for the renewal before it was later removed from the agenda.
“This is an agreement that allows management to provide housing for those of us who cannot live in luxury condos or million dollar brownstones,” the letter read. “[Do] not let the vocal minority force you out of your home.”
The letter also encouraged tenants to show their support at the meeting – “at least one member of every household.”
Russo spoke about this point at the meeting. He said that as he answered e-mails from residents critical of the tax abatements, he received “divisive rhetoric” from Hoboken newcomers “spewing venom.”
But at the meeting, resident Toni Tammarazo called Russo’s letter itself “divisive.”
Later, Councilwoman Dawn Zimmer called Russo’s letter “fear mongering” in an interview.
At the meeting, Russo said he is protecting Hoboken’s dying middle class. “They were the economic engine of this city when it was not en vogue to live here,” Russo said. “If Church Towers goes and Clock Towers goes, then the rent controlled apartments go, we’ll only have the elite few in this town.”
Members of the public spoke about the issue at the end of the meeting. Donna Antonucci, a vocal critic of city spending, said the classification of anyone who opposes the use of PILOTs as an “elitist” doesn’t fit. She said she wants the city and the council to take the time to examine the PILOT agreements before agreeing to a renewal.
Antonucci said her residence is “a walk-up with no garage, no gym, no back yard … it’s not a luxury condo. I’m middle class,” she said. “I am not against affordable housing, not at all. And the intention is not to not extend this [PILOT agreement]. The intent is to do due diligence. Has the reporting been in place? Do we even have the data to say that we’re getting all of the revenues that we should be getting?”