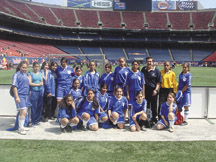 The United States Soccer Women’s National Team and his own children motivated Roberto Zuluga to begin his North Bergen recreation coaching career in 2004.
Zuluga said last week that one day, his daughter Andrea came home and told him she would like to play soccer “because the U.S. Women’s Team are champions. She said, ‘All of the girls are doing better than the boys in this country, so I want to play soccer.’ ”
Zuluga also used to watch a lot of soccer on television. After moving from Colombia to the United States 25 years ago, he played every weekend in an adult league at James J. Braddock Park.
Now, he coaches three of North Bergen’s 24 recreation soccer teams, and took all three of them to division championships this year, a new town record.

“I think it made my daughter push me [to become a coach] because when the [United States] women were playing, I watched all of the games,” said Zuluga last week. “I love to see the girls from this country. They won their championship last month, so I’m very proud of the United States girls.”
Four years ago, Andrea, who is now 13, joined the North Bergen Recreation Div. III team “The Stars.” At that point, they had not won a game in 10 years.
Soon after, there was an open position to coach the The Stars, so Zuluga took it.

Zuluga now coaches the Div. III Stars, the Div. II Broncos, and the Div. I Eagles.
The North Bergen Recreation Program organizes a multitude of sports teams for residents. With a recreation fee, children can join a soccer team and are placed into three divisions by their age and ability, with Div. I teams being the best of the bunch.
All of Zuluga’s 67 players won their division championship games this year and were rewarded with champion jackets. He was the first coach in North Bergen to have three teams do so.
He also coaches a traveling team that plays soccer with other recreational teams in the state.
“It’s got to be perfect luck,” said Zuluga of breaking the North Bergen record.
Zuluga’s son Roberto, 10, who is a middle and goalie, and Andrea, 13, who fills the position of middle, won the Broncos’ championship game as teammates. He said his son pushes him toward coaching just as much as Andrea.

Zuluga said with the help of another coach, the Eagles succeeded in their fall season with a score of 5-0.
Eagles Team member Nicholas Gonzalez said that it was “striking” that they were able to win the championship game. Gonzalez said he couldn’t sleep the night before the game because he was rehearsing every possible play.
“I knew we had the individual talent, but it was meaningless unless we were able to put all of it together as a team,” said Gonzalez.
He said that everything his coaches told him that day filled him with “passion.”
Zuluga’s first team five years ago, the Div. III Stars, was comprised of nine girls. He said that they learned to play and moved past the frustration of losing.
The love of the game hasn’t dissipated over the years.
“These kids played with their heart,” said Zuluga. “It was the best game I ever saw and the [opponents were] unlucky. They tried so hard, but my kids tried harder.”
He said that three of the star players on the team were girls that ranged from ages 8 through 10.
“They played like it was no tomorrow for them, and that’s why they won the championship,” said Zuluga.
Zuluga said that last summer, North Bergen’s first recreational girls’ soccer team got the chance to play their championship at Giants Stadium. Even though they lost 2 to 1, he said that they loved the experience.

For the spring season, Andrea will be moving up to the Div. I Eagles Team from the Broncos. She said that she hopes to win more games.
“Winning is always better than losing, and if you win, our dad buys [the team] pizza or ice cream,” said Andrea.
Andrea said she was really happy about their success this year, especially while looking back on the how difficult it was in the past.
“Before, I couldn’t even really dribble with the ball,” said Andrea.
Andrea said that her father puts pressure on his players during the game, but said that it challenged them to work as a team and that they “rarely” lost a game during their season.

Zuluga said that it is not unusual for his players to call him at 8 a.m. on a Saturday asking if they can go play soccer. He said that during the season he leaves his job as a project manager at a recycling plant and plays with children almost every night.
He admits that his team probably won’t let him retire easily.
Zuluga said that the recreation program in North Bergen is one of the best in the area. He said it teaches children how to interact, and keeps them in a safe environment and an active lifestyle.
“My son has all of the video games, but he spends one hour on them and then he wants to go play sports,” said Zuluga.