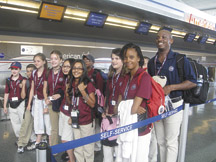 For the Jersey City residents who saw President-elect Barack Obama speak here last January, it turned out to be a glimpse into the future.
A year later, some of those same people will travel to Washington, D.C. on Tuesday, Jan. 20 for Obama’s inauguration as the first African-American president in U.S. history.
Jersey City resident Mahaley Stewart Bowles will actually be in Washington a few days before the inauguration to work as a volunteer at various events leading up to the historic day.
“I want to be a volunteer at the Inaugural Ball because it will be formal, not political, and the dignitaries who will be attending will have their guards down, making it easier to talk to them,” Bowles said last week.
Bowles also sees being at the inauguration as a vindication of the hard work she and other Obama supporters put in during the past year across the country: “It just feels like everything we did wasn’t a shot in the dark and had a positive outcome.”
What makes it even more special for Bowles, who works as the Community Partnership for Tobacco-Free New Jersey coordinator for Hudson County Partners in Prevention, is that her 12-year-old daughter Jade will witness the swearing-in.
Jade is part of the People to People Presidential Inauguration program, an offshoot of People to People International (PTPI), a non-profit organization founded by the late Dwight D. Eisenhower to enhance international understanding and friendship through educational, cultural and humanitarian endeavors. Both adults and children are involved in the group.
Bowles and her daughter will be just some of the estimated 3 million people are expected to attend the inauguration ceremony for the 44th president.
Also, Mayor Jerramiah Healy and his wife Maureen are scheduled to attend the inauguration according to the mayor’s spokesperson, Jennifer Morrill. Healy and Newark Mayor Cory Booker were the earliest supporters amongst New Jersey politicians for Obama during his run for the presidency.
Not everyone who heads to Washington, D.C. that day will get to be present for the actual ceremony, but many will go to other locations to view it on giant screens. Those who still want to attend the ceremony will have to get tickets through their local Congressional representative. For more information, visit www.inagural.senate.gov, www.senate.gov, www.house.gov, or www.washington.org.

Bobby Stewart is one of several Jersey City residents organizing bus trips to D.C. for that day, leaving early that morning for a four- to five-hour trip (see sidebar for trip information).
Once they arrive in D.C., the travelers will make their way to public venues such as the National Mall, the D.C.- based park where giant viewing screens will be set up.
Stewart is better known for his King’s Knight Chess Club, which operates classes for children and adults at some of the city’s public schools and public housing complexes.
Stewart is employing all the skills of a chess master to put the trip together, along with members of the Donner and Walker families.
“During the election and pending the outcome, we knew it would be a historical event,” Stewart said.
Stewart also plans to employ his skills as a videographer of weddings and other events by videotaping testimonies of those on the trip. He will incorporate it into a commemorative DVD to be provided as part of the bus trip package.
As for Stewart’s reaction to being someplace where seemingly the whole world will converge, he is taking it in stride.
“Well, this is actually our first bus trip, and our thing is to get to our destination and make the best of it,” Stewart said.
Bishop Austin Harrold is also planning a bus trip for local residents to the inauguration.
Harrold, the bishop at Interdenominational Christian Community Church on Oxford Avenue in Jersey City, has planned several trips in the past, including one to the Million Man March (also in D.C.) in 1995.
Harrold and fellow organizers have reserved up to seven buses to leave from Oxford Avenue that morning at 4 a.m. Just thinking about the inauguration put Harrold in mood of pride.
“It’s one of our proudest moments as African-Americans,” he said, “and this signifies that nothing is impossible and anything is possible in life.”
Sidebar
Get on the Obama bus