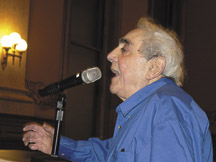 The Jersey City City Council voted last month not to oppose state legislation to implement a “hybrid” school board in state-run school districts such as Jersey City and Newark.
Mayor Jerramiah Healy supports the notion of such a board, which would change the current nine-member elected board to a board with three members who are publicly elected, three appointed by the mayor, and three representatives from local colleges who are appointed by the state’s Commissioner of Education.
The council’s 6-2 vote at their Dec. 17 meeting defeated Councilman Steve Fulop’s resolution to oppose the legislation.
The hybrid concept was originally suggested by Healy in last year’s State of the City address. Healy said a hybrid board would give city government more input on policy affecting city schools, which have been under state control since 1989 but are transitioning back to local control.

Former Mayor Anthony Cucci, who served in City Hall from 1985 to 1989, also currently serves on the Jersey City school board. Cucci spoke during the public comment portion of the council meeting.
Cucci criticized Healy’s push for a hybrid school board. He pointed out – as Fulop also did – that voters in the November general election voted overwhelmingly (87 percent) for Jersey City’s school board to remain an elected one. (The hybrid choice was not on the ballot.)
Cucci said the state bill, if approved by the Assembly and Senate, will circumvent the voters’ choice.
“Whether it is the hybrid [board] … or whether it’s for any other phase that is already been voted on or contemplated, you should not do these things after the vote by the public,” said Cucci to applause from the audience.
Cucci also complimented Fulop for “having the courage and clarity” to introduce the resolution.
He warned that if the council voted down Fulop’s resolution, “18,000 people will remember what you did” in the mayoral election in May. Cucci also said he was tired of the mayor “not being a friend of education.”
However, six council members (Peter Brennan was not present) thought otherwise. City Councilman Steve Lipski, founder and president of the CREATE Charter High School in Jersey City and one of the six naysayers, explained that the November results will be taken into consideration by local Assemblywoman Joan Quigley and other state legislators when they debate the bill in the coming year in the state Assembly and Senate.
The bill, sponsored by Quigley (D-32nd Dist.), was introduced in October in the Assembly.
The council also voted down a Fulop resolution to support pending state legislation that would change the date of school board elections from April to November to increase voter turnout.

Under the proposed state legislation, a vote by the City Council is all that would be required to implement a hybrid school board.
Fulop’s defeated resolution would have said that the council only supported the state bill if it carried an amendment requiring voter approval.
Fulop was one of two council people who voted for the resolution, along with Councilwoman Viola Richardson.