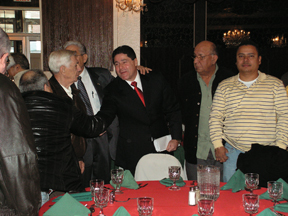 A West New York physician recently offered to take over for the town’s mayor for no pay and said he wants to recall Mayor Silverio “Sal” Vega, who earns $15,000 for performing his duties.
Dr. Felix Roque, the director of pain management at St. Mary’s Hospital in Passaic and an Army reservist, started the recall movement last Sunday at a brunch he hosted at the Schuetzen Park ballroom. More than 300 community members, including teachers, police officers, and religious leaders, attended.
The next mayoral election is not for another two years, but Roque said West New York can’t wait.
“Our community is dying,” Roque claimed. “There is uncontrollable hemorrhage in our town due to municipal incompetence, fiscal irresponsibility, waste, abuse, and most of all, citizen neglect. The trauma was inflicted by the man who swore on the Bible to protect us.”
When Vega was asked for a reaction to Roque’s comments, he said that everyone has the right to get involved in local politics.
“Every resident of West New York has the right to participate in the election process, and I welcome anyone to run for office,” he said. “I have enjoyed my service to West New York, and I think the more people who get involved with the process, the better it is overall.”
Vega also responded to many of Roque’s specific complaints about town government, including Roque’s claim that Vega runs West New York like a tyrant, comparing him to Fidel Castro.
Vega, whose family left Cuba when he was a boy, said, “No matter how bad you are, no one [is as bad as] Fidel Castro.”
In addition to serving as mayor, Vega had been an assemblyman until last year, when he got involved in a bitter election for a state Senate seat and lost to Union City Mayor Brian Stack.
Roque said last week that Stack and former West New York Mayor Albio Sires are role models of his. However, he said no one is putting him up to what he trying to accomplish.

Roque said that Vega’s supposed incompetence has caused tax increases, and that higher taxes have caused several foreclosures in town. However, neither Roque nor any other resident spoke out at the public hearing on the proposed $69.15 million budget that was held last fall.
The budget was up 6 percent from the previous year, largely due to contractual 3.5 to 4 percent raises and debt service, a town accountant said in November. West New York officials are waiting for final state numbers before they approve the final budget.
In many local towns, taxes have risen this year due to a decline in state aid and an increase in the costs of benefits and energy bills.
“Due to his mistakes and inefficiencies, the citizens have paid the price,” Roque charged last week.
Vega said the town is currently appealing to the state for additional funding to ease the burden for residents.
“West New York has the same problems that you see at the federal level, the state level,” said Vega.
Roque said one way to alleviate fiscal pressure is to cut the administration’s salaries.
“You are talking about people who are not academically or intellectually qualified, seeking jobs that are making more than $150,000. They are in those jobs right now,” he said.
Roque said that if he took the job for no pay, he would be an example to others.
“I commit myself to serving as your mayor without receiving one cent of public money,” said Roque. Members of his administration, he said, would also have to accept pay reductions.
As far as supporting himself while in office, Roque said he would continue to practice medicine. Mayor of West New York is considered a part-time position with a $15,000 salary plus benefits.
Vega said last week, “It is considered part-time, but when you are mayor, you are on call 24 hours a day.”
Vega said he receives additional pay for his work as athletic director for the West New York School District. He added that he has been working to improve the community since 1984 as a volunteer, and since 1991 as an elected official.
“I take pride in the fact that I have worked hard for everything I have achieved,” said Vega.

Roque alleges that the West New York schools are also suffering under the current administration.
“[Vega] micromanages that budget, so that they don’t spend it, so he could use it at the end of the year,” he said.
Vega said that this allegation is not true.
“The great majority of our funding comes from the state [because West New York is an Abbott District], which means that the state monitors [the budgets],” he said.
Roque also claims that police morale is low and that there are not enough officers patrolling the streets.
“There is an inexplicable small proportion of police officers seen around the beat, around the town,” said Roque. “Our city’s finest are lacking the tools to fight crime. There’s lack of bullet proof vests, vehicles, and fingerprinting equipment.”
He added, “It is like in the military. If you don’t provide the basic needs of your troops, they are not going to be happy with you as a leader.”
Vega said that police morale is not low.
“I think the Police Department has great pride in West New York, and they do an excellent job,” said Vega. More evidence of this, he said, is the fact that many officers regularly get involved with the community outside the department by organizing charity events for local groups.
Roque said the city is literally and figuratively a mess.
“The streets are filthy with garbage and animal waste,” he said. “There are potholes everywhere. You can see and smell the neglect.”
Vega conceded that there are potholes and said that the town is working toward fixing them.
“This spring, you will see us taking care of the worst streets that have not been taken care of in 10 years,” he said.