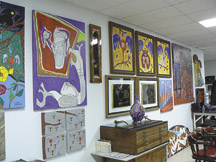 World-renowned Brazilian artist and Jersey City resident Duda Penteado has opened his new art studio/gallery at 642 Montgomery St., a block away from the Beacon condo complex (site of the old Jersey City Medical Center).
Penteado, a Jersey City resident since 1996, is known for various artworks including “Beauty for Ashes,” an artistic reaction to 9/11 that included a small shard of steel from the Twin Towers; the installation “Mi Cuba, Mi America,” which explores the impact of Cuba and its culture upon American culture and vice versa, created for the Hard Grove Café in downtown Jersey City; and the mural “The Way of Life,” a series of images influenced by verses in the Bible, which can be seen in the parking lot of the City Line Church on Kennedy Boulevard in Jersey City.
At the opening on Dec. 5, Mayor Jerramiah Healy cut the ribbon. Then, a reception was held in honor of Penteado at the Beacon, where he was feted by such admirers as City Council President Mariano Vega and New Jersey City University President Carlos Hernandez.
Penteado, sporting painted-on jeans, thanked his supporters, including his “lovely” wife Rozani.
He also recalled the time he first saw the space that went on to become his new studio/gallery at the corner of Montgomery Street and Baldwin Avenue.
“I said, ‘That’s OK; I’ll take the corner,’ ” Penteado said.