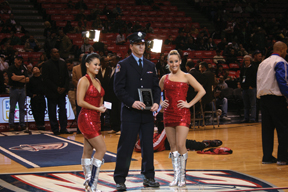 When a local firefighter working overtime pulled an unconscious woman out of a West New York residence engulfed in flames last summer, he never thought he would be honored for what he says is just part of his job.
However, Pete Mancini of North Hudson Regional Fire and Rescue was recognized for this heroic deed at a New Jersey Nets game last month.
He was presented with a Local Hero award and plaque from the Dunkin’ Brands Community Foundation, which includes Dunkin’ Donuts. The foundation is dedicated to recognizing people who serve their communities.
“They honored me,” said Mancini, “but there were many other guys that should have been with me. It is more a team thing.”
He said that being a firefighter is like being a player on a sports team.
“You got a team and everybody is working for the same goal,” said Mancini. “Once that situation is happening, everybody gets ready to go.”
What he did on that August evening, he said, was nothing miraculous. “It was a situation that we were trained for,” he said.

Being honored made him nervous

Mancini may have been trained to handle life-or-death situations, but standing up in front of all those people at the game made him uneasy, he said.
“I thought I could handle a little bit more, but when they had me standing at half-court before the game started, I was nervous,” he said.
Despite all the attention, Mancini said he had a great night out with his family.
“It was nice for them to be a part of it,” he said.
He also said that he was impressed that Dunkin’ Donuts honors a local hero at nearly every game.
“I really appreciate what they are doing,” said Mancini.
He also said that he is grateful for the efforts of his colleagues who helped put out the fire.

Mancini said that he may have been singled out because he was the first to find the woman.
“When I opened the door and saw the fire rolling up on the walls and over the ceiling and there was this woman lying on the floor face up, I wasn’t expecting that,” he said.
Mancini managed to bring her to the front porch and there he gave her CPR.
“She seemed to come out of it, and in the ambulance, she was speaking,” he said.
Unfortunately, the fire was so severe that the woman died a few days later from burns. Mancini said that he had hoped for the best.
“You never want to see someone die from fire or smoke,” said Mancini. “It is just a sad thing.”

Mancini, who grew up on 54th Street in West New York, attended Seton Hall University and taught physical education at Memorial High School for four years.
“Then, my brother brought home the application [to the Fire Department] and that was it,” said Mancini. “Once I had the opportunity to take that job, I took it. I did not hesitate to take it, and it is something that I really love to do.”
Mancini said he can not find the words to describe how good it feels to help people out of a fire and into safety.
“It is a gratifying feeling once it’s done,” he said.
About Mancini, North Hudson Regional Fire and Rescue Battalion Chief Mike Giacumbo said: “He’s one of us, so when the situation arises, he doesn’t hesitate. He is the type of guy you want with you when things go bad. He is a good guy, a good family man.”
Mancini said that the only other job that could take him away from his firefighting duties is being short stop for the New York Yankees.
“But, I don’t see that happening,” said Mancini.
He now lives in Monmouth County with his wife, Susan, and their three children, Emily, 15, Peter, 13, and Samantha, 8.