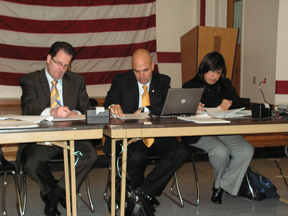 An ordinance to increase street sweeping in Union City was introduced at the Board of Commissioners meeting Tuesday night. It will be up for final vote at the Jan. 20 Board of Commissioners meeting at Jose Marti Middle School, at 1800 Summit Ave., at 7 p.m.
The ordinance calls for an additional day of cleaning for the east side of Bergenline Avenue, from 30th Street to 49th Street.
Currently, the east side of Bergenline Avenue is cleaned once a week. The stretch from 30th Street to 36th Street is cleaned on Mondays between 8 and 10 a.m., and from 37th Street to 49th Street is cleaned on Tuesdays during the same hours. If the ordinance is passed, those blocks will also be cleaned on Fridays between 8 and 10 a.m., according to the Department of Public Works.
That means residents will also have to move their cars during those hours, as well.
“We are just trying to keep the commercial district much cleaner,” said Union City Mayor Brian Stack at the meeting.
Stack added, “We have sweepers [on foot] out there. Bergenline Avenue is actually swept twice a day right now. We also ask the merchants to also contribute by sweeping their own sidewalk.”

Tax break for those who improve homes

The program was supposed to expire on Dec. 31, 2008, but the ordinance extended that deadline to Dec. 31, 2009.
Residents may file an application up to 30 days after the completion of the new property or addition at the Union City Tax Assessor’s Office at Town Hall, at 3715 Palisade Ave.