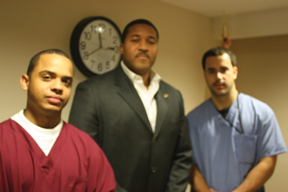 Sometimes to learn how to do something, you have to get out of the classroom.
This is a lesson two interns at the United Cerebral Palsy are getting while they combine their education with helping disabled kids.
Emanuel Salazar of Union City and Nick DePascale of Secaucus both started as interns in the Bayonne UCP center last September, seeking to expand their knowledge in a field of work that both intend to pursue as a career.
Salazar said he learned about the program through Kean University, which he is attending in pursuit of a bachelor’s in social work.
DePascale’s arrival is a pleasant upgrading of the intern program since he is currently at Rutgers in Newark, where he is seeking a master’s in social work.

“The idea was to help generate experience for people who are interested in taking up a career in this field.” – H. Reggie Neil
________

The internship program was set up about two years ago with Kean University, said H. Reggie Neil, director of clinical and social services.
“The idea was to help generate experience for people who are interested in taking up a career in this field,” he said.
UCP is one of the key providers of services to the disabled, not just throughout Hudson County, but also in Passaic, Essex and Bergen counties. These programs help people with other developmental disabilities, not just cerebral palsy.

Branches around the county

Locally, the administrative offices have been in Bayonne for about five years, UCP has been trying to meet the needs of the community. But some programs, such as its pediatric daycare facility, have a waiting list.
There are also two Growing Tree Learning Centers located in Jersey City and an after-school program and a Saturday respite that takes place in Hoboken.
UCP also runs the Adult Special Needs Program, the Adult Aftercare Program, the After School Program and the Saturday respite at the UCP Center on Kennedy Boulevard in North Bergen.
While many programs are run out of its centers, the reach of UCP is made greater by its in-home programs.
People in North Bergen, West New York, Bayonne, Hoboken, Kearny, Harrison, and even East Newark get help.
Neil said the internship program provides a great experience, allowing the students to interact with professionals in the field and to put theory into practice.

The interns work 16 hours a week in the pediatric medical program. This is a program that helps kids – infant to 6 years old – who have developmental and medical disabilities.
Both interns work two days a week – Wednesdays and Thursdays.
Salazar said his work wasn’t exactly what he expected, calling the population “fragile.” His work is valuable. “I could have taken up business or economics,” he said. “But I wanted to help people, and I feel doing that will be rewarding.”
His work in the field allows him to bring back practical knowledge to the classroom, which he can share with other people.
DePascale said he learned about the program through the newspaper and contacted the UCP human resources department.
Also in the program since September, DePascale said he wanted to get into a position where he could get a better grasp on the practical sides of the profession, and felt that by taking on the internship, he would gain knowledge.
“I enjoy working with the staff and interacting with the children,” he said, but also said one lesson he learned quickly was that this was a team effort.
Salazar said part of the work involves finding a way to tap into a client’s strengths, learning how to understand the unique abilities of each. He said he also carries over some of the strategies he learned in class to see how they apply.
Back at school, the interns talk about their experiences here.
Neil said the UCP of Hudson County is a community-based organization.
“Our goal is supply resources that can better enhance services in the community, and this program is a collaborative effort with Kean and Rutgers,” he said.