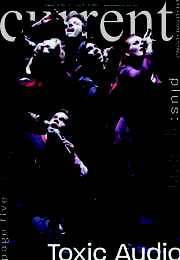 You won’t believe your ears. Sure, you’ve heard a cappella singing groups before, but you’ve never heard anything like this. Toxic Audio takes a cappella far beyond the barbershop and doo-wop sounds usually associated with the genre.Here’s the lowdown from the show’s publicity materials: “The five vocalists in Toxic Audio use no instruments other than the human voice to create complex sonic textures, rhythmic drumbeats, thumping bass lines, and searing guitar-like solos in their performance of contemporary pop songs, timeless classics, jazz-scat, and vocally orchestrated original compositions.”

Even though the show’s quirky audiovisual intro explains that every sound you’ll hear is made by one of the five performers’ voices, you’ll have a hard time remembering it as the show unfolds.

Toxic Audio originated at the Orlando International Fringe Festival in 1998, and the performance still has a raw edge to it. In fact, this is the edgiest performance I’ve ever seen that came with a copy of Playbill. One audience member said the show is like a street performance elevated to an art form. With no orchestra to distance you from the performers, their talents are on stark display, and the cozy, 250-seat John Houseman Theatre adds to the sense of immediacy.

The show’s standout performer is Hoboken resident Paul Sperrazza, 29. Sperrazza, a one-man percussion section, also enlivens the performance with his livewire antics and his lead vocals on Michael Jackson’s “Thriller.” Billed as a “human beat box,” Sperrazza specializes in what’s known as vocal percussion or mouth drumming, which dates back to old-school rappers like Doug E. Fresh and the Fat Boys.

A Long Island native, Sperrazza attended college in Florida and went on to perform in singing groups at Walt Disney World and Universal Studios. While performing with one of these groups – the Hollywood Hi-Tones – he met up with several of the singers who would go on to form Toxic Audio.

The Toxins (as they call themselves) wanted to do something a little edgier than the doo-wop of the Hi-Tones, so they created Toxic Audio for the Orlando Fringe Festival – just for fun. But as Sperrazza explains, some Disney “higher-ups” came to see the show, which led to a two-year run for Toxic Audio. From 1998 to 2000, the Toxins performed at Disney’s MGM Studios and at the Pleasure Island jazz club.

“I’ve been to the Caribbean more times than I can count,” Sperrazza says. “Now I just want to be in Hoboken and raise my daughter.”

When Toxic Audio opened off-Broadway in April, Sperrazza and his family chose to move to the Mile-Square City.

Sperrazza has a cousin in Hoboken, but he also chose Hoboken for its family-oriented atmosphere and its convenience to the city – including the Houseman Theatre on 42nd Street.

When he’s not performing, Sperrazza likes to hit Hoboken’s mom-and-pop restaurants, including Tutta Pasta, and hang out at the Frozen Monkey Café.

“The great thing about Hoboken is that they deliver. I’ve never seen this in my life,” Sperrazza says, explaining that delivery wasn’t widely available in Florida. “I go to the supermarket and they deliver!”

He and his wife, Angie, and daughter, Ayla, 9 months, also enjoy Hoboken’s parks.

The Toxins also performed at the Drama Desk Awards, presenting “Turn the Beat Around,” the Vicki Sue Robinson disco anthem that was revived by Gloria Estefan.

Sperrazza says Toxic Audio’s New York show includes the best material the group has come up with over the past six years.

For the most part, the performance includes pop songs – such as the Beatles’ “Why Don’t We Do it in the Road?” – arranged for voices by two of the Toxins, Shalisa James and Michelle Mailhot-Valines.

According to Sperrazza, the material focuses on each performer’s abilities, and their vocal talents are considerable. Each member has a chance to shine, trading off leads from one number to the next, and providing bass lines, percussion, sound effects, and “guitar” solos. The Toxins also bring comedy into the act – including Sperrazza’s one-man dramatization of the Bette Midler tearjerker “The Rose.”

Another number includes a half-dozen classic TV theme songs. In one of several skits that involve audience members, Sperrazza turns in a bravura performance mimicking a record player with its speed switched by mischievous cast members.

After Toxic Audio ends its run at the Houseman Theatre, the show may move on to Las Vegas. Think about catching a performance while it’s here. Toxic Audio is a little bit edgy and a lot of fun – if you’ve got friends or family in from out of town, it’s the perfect show. And don’t forget: Never underestimate the power of the human voice.

When: Mondays-Saturdays at 8 p.m.

Matinees on Wednesdays at 2 p.m. and Sundays at 3 p.m.

Toxic Audio runs through July 31. (There’s a possibility that the run will be extended.)

Tickets: $50. But if you use code TLFLX26, you can get two tickets for $50. To order, call (212) 239-5258 or see www.telecharge.com. Discount tickets are also generally available at the TKTS booths in Times Square and at South Street Seaport.