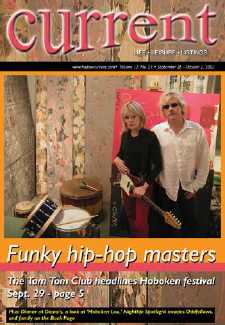 When it comes to having your music sampled, the Tom Tom Club are right up there with Parliament Funkadelic and Motown bands.

True hip-hop and rap fans know about the Tom Tom Club. The side-project from members of the Rock and Roll Hall of Fame band The Talking Heads, the Tom Tom Club is one of pop music’s brightest small acts. After a quarter-century of making music, they still can rock and they are coming to Hoboken on Sept. 29 to headline the city’s fall Arts and Music festival. The fall classic will not be the first time the band performs in the mile-square city. A couple years ago they played at Maxwell’s.

In 1974, Frantz and Tina Weymouth were students at the Rhode Island School of Design. A year later they founded The Talking Heads with David Byrne, and in 1977, they were joined by Jerry Harrison. They moved to New York City to play at the popular rock clubs. The Talking Heads quickly became one of the top acts playing at CBGBs and landed a spot on the cover of the Village Voice.

"It was like we made it, and we felt like we had so much more to offer," Frantz said.

A typical week at CBGBs during that time, according to Frantz, would feature The Ramones, Debbie Harry, and Patti Smith.

"The scene was something special. It was really fresh. When we first came to New York, we turned down record deals because we weren’t ready. It worked out in the end," Frantz said.

After five years of touring and four albums written and recorded with The Talking Heads, Frantz and Weymouth were signed to Island Records by music industry legend Chris Blackwell.

The Tom Tom Club was formed in the early ’80s as a funk, dance, and techno music experiment. Frustrated with mainstream radio at the time, the duo hit the studio in 1981 determined to create a fresh and unique sound. The result was the internationally acclaimed eponymous album Tom Tom Club. With funky grooves, hooks and schoolyard vocals, it featured the hit singles "Wordy Rappinghood," and "Genius of Love." Both songs have become hip-hop standards for sampling. Some of the people to have sampled the Tom Tom Club’s music include GrandMaster Flash, Ziggy Marley, Mariah Carey, Tupac Shakur, L.L. Cool J, Sean "P-Diddy" Combs, and Busta Rhymes.

"It makes us feel good to hear our music sampled by a variety of groups. We are highly influential to modern hip-hop and R&B," Frantz said, during a recent phone interview. "Back then radio played what it still plays, Elton John and the Beatles. We wanted something else."

After their debut album, the band followed their success with Close to the Bone, released in 1983. The album included songs like "The Man with the Four-Way Hips," and "Pleasure of Love." Again, their music was well received at dance clubs worldwide. Throughout the band’s success, Frantz and Weymouth still found time to tour with The Talking Heads.

Back to the studio

In 1988 they went back to the studio to record their third album Boom Boom Chi Boom Boom. A complete departure stylistically for the band, the album is now out of print. It included the songs "Don’t Say No to Love," and the Velvet Underground’s "Femme Fatale" (featuring Lou Reed on guitar). Music critics nationwide have described it as a classic.

"After that album grunge started to take over, and we just sat in the backseat and watched it all happen. I’m a big Kurt Cobain fan and I wanted to see him do his thing," Frantz said.

After the grunge movement of the ’90s, the couple produced albums for bands like Angelfish (featuring Shirley Manson) and Los Fabulosos Cadillacs. By the end of 1997 they returned to the studio to record The Good The Bad and The Funky. During that time, The Talking Heads had already disbanded and Frantz and Weymouth decided to focus solely on Tom Tom Club projects. They embarked on a national tour titled Oktoberfest, and returned to New York City to play at CBGBs and SOBs.

"When Talking Heads broke up, we kept playing, and the response has been terrific," Frantz said.

is the group’s latest album. It was released Sept. 24. A complete document of a Tom Tom Club concert that features one of the tightest funk outfits going, the album demonstrates why the group continues to gather fans and momentum.

True to their signature sound, it is a multicultural trip through the funky hip-hop, reggae and R&B grooves of their previous five albums that includes many of the band’s previous singles like "Genius of Love," "Time to Bounce," "Holy Water," "Happiness Can’t Buy Money," and "Wordy Rappinghood."

"Tom Tom Club music is done with a lot of love in our hearts," Frantz said. "Magic on stage happens almost every night with this band. We received an excellent response from our fans, and I always feel really good about our music."

Last March Talking Heads was inducted into the Rock and Roll Hall of Fame, a clear indication of the impact the band made on pop music.

"It’s very rewarding to be inducted. Now the pressure is off. You know that what you’re doing is valid," Frantz said.

The group is currently performing at New York City clubs, and next year they will embark on a national tour in support of their new album.

The band will perform at the First Street stage at the Ninth Annual Hoboken Fall Arts and Music Festival at 4:30 p.m. For more information on the festival call (201) 420-2207 or visit www.tomtomclub.com. q