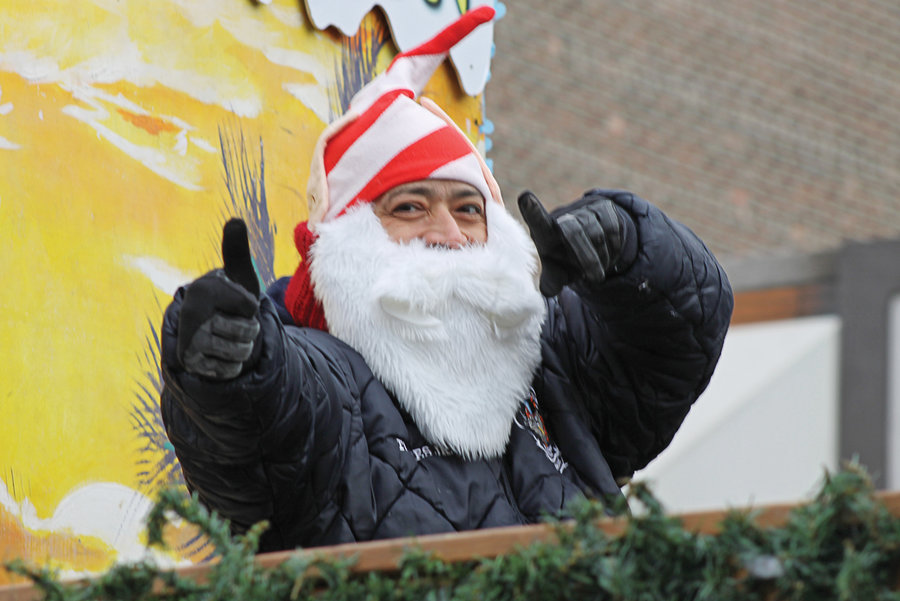 With weather forecasters predicting the season’s first snowfall this past Sunday, local residents — especially kids –were very much in the mood for the North Hudson Firefighters Association and Fire Officers’ 17th annual Santa Parade in North Hudson.
The parade started on 85th Street and marched south along Bergenline Avenue to 32nd Street, ending at the Four Star Diner. Each year, it’s one of the few wintertime parades. The weather did not stop the bundled-up crowds from awaiting the arrival of Santa Claus.
Organized in conjunction with the municipalities of North Bergen, West New York, Weehawken, Guttenberg, and Union City, the parade featured two bands, a host of floats, fire trucks, a variety of characters from children’s TV and other programming, and, of course, Santa.
High school marching bands from North Bergen, Union City and Cliffside Park played holiday favorites, while cheerleaders from the West New York Recreation Department and Memorial High School went through routines despite the cold.

_____________
“This became the first thing they did together as regional department.” – Sal Vega
____________
In full uniform, the Union City High School ROTC, along with local motorcycle cops, led the parade.
“The fireman union has kept it up,” said former West New York Mayor Sal Vega. “It started when the fire departments of five towns combined into the North Hudson Regional department [in 1999]. William Renner started it. This became the first thing they did together as regional department.”
The NHRFR Christmas Parade became an annual tradition. Prior to the regionalization, all the local municipal firehouses used to host their own parades or community events for the town children during the holiday season. The parade was suspended briefly when Renner retired. There was no parade held in 2012.
North Hudson Regional Fire and Rescue Capt. Lou Morales, the parade chairman this year, took up the reins of the parade. Renewed in 2013 with a route that took it though Weehawken for the first time, the parade returned to its Bergenline Avenue route in 2014.
At last weekend’s event, along with local law enforcement professionals – many wearing Santa hats – were members of Hudson County Sheriff’s Office
Royal Printing of West New York, Bond Floats of Clifton, and East Coast Toyota in Bergen County were some the sponsors of this year’s parade. But some of the floats included local officials such as one featuring Guttenberg Mayor Gerald Drasheff.
Al Sullivan may be reached at asullivan@hudsonreporter.com.