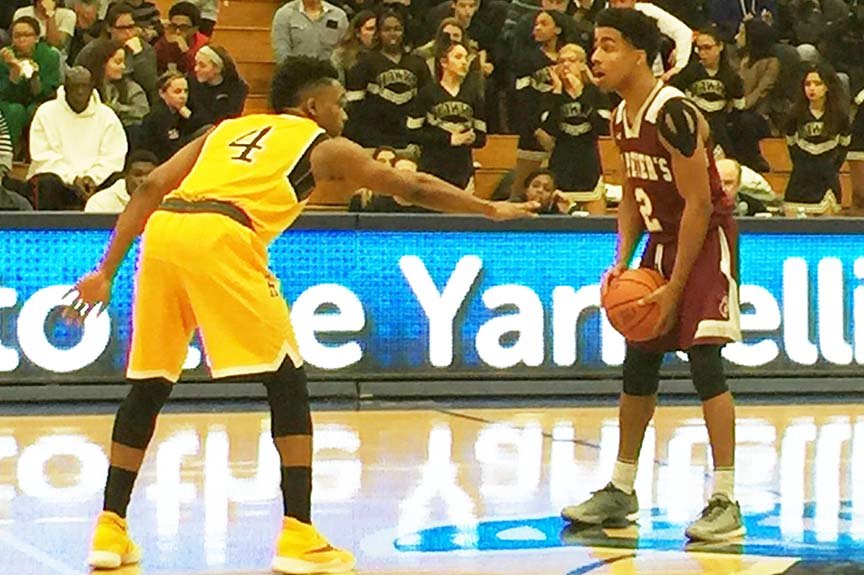 That’s because a few of the Marauders were also key members of the Prep football team that lost to Paramus Catholic in the NJSIAA Non-Public Group 4 championship game at MetLife Stadium three weeks ago.

So players like Jorge Portorreal and Shayne Simon were gridiron warriors, then took a few days off to recover, then joined the Marauders’ basketball team.

“I feel like everything is a process,” said Alex Mirabel, the third-year head coach of the Marauders. “When Shayne and Jorge joined us, we had a couple of good practices, but you could see that they were still in football mode. But having them back with us makes a big difference.”

It sure will, considering that the 5-foot-11 Portorreal averaged 14 points per game last year, earning Hudson Reporter All-Area Third Team honors. He’s the top scorer returning for the Marauders, who were 15-10 last year and reached the Hudson County Tournament title game.

“He’s improved a lot,” Mirabel said. “I think defense and intensity are two things that he brings to the table. He’s also a great passer. I think it helps his game a lot more.”

Simon, a 6-foot-4 junior, is a swingman for the Marauders.

“He does everything for us,” Mirabel said. “He’s probably our most skilled guy. He can play inside, but he can also play the point guard position. The biggest thing he brings is his leadership skills, both on and off the court. He brings a lot of intensity to the games.”

Senior Luke Bukowiec returns. The 6-foot guard played a lot of minutes last year, but gained notoriety when it was revealed that Bukowiec is the son of Hall of Famer Carol Blazejowski.

“He’s now one of the best shooters I’ve seen,” Mirabel said. “He also has an excellent basketball IQ. I think he’s headed to Stevens Tech next year.”

Brendan Thiele also returns. The 6-foot-5 Thiele has grown about three inches, which has helped enhance his college resume. Thiele was a standout in the Hudson County Tournament finale against Hudson Catholic, a game where he tossed in 24 points.

“He was very strong for us at the end of the season last year,” Mirabel said. “He’s already getting looked at by places like Army and Princeton.”

Again, Thiele is only a junior. He has another year with the Marauders.

The Marauders are also fortunate to have the Twin Towers returning — and we mean Twin Towers.

Senior Ryan Onslaer is a 7-foot center. His twin brother, Parker, is an inch shorter at 6-foot-11.

“They had a good offseason,” Mirabel said. “They worked hard all summer.”

Freshman Will White is a 5-foot-8 guard.

“I think he’s going to be a really good one,” Mirabel said. “He understands what we want. He’s learning from Jorge and that’s a big help. He’s a big, physical kid. He’s going to play for us right away.”

Dylan Knight is a 6-foot-3 sophomore who is in the mix.

“He’s the most athletic kid we have,” Mirabel said. “He’s very athletic. He runs the floor and gets after the ball. He’s a strong kid who is not afraid to go to the basket. He finishes well.”

Senior Zachary Chmiel is a 6-foot-5 force down low.

“He’s a banger,” Mirabel said. “He does all the dirty work.”

The Marauders opened their season last Saturday with an impressive 60-40 win over Randolph at Randolph. In the game, Thiele led the way with 19 points, including three 3-pointers. Simon wasted little time to get acquainted with the hardwood, scoring 10 points and limiting Randolph’s NCAA Division I recruit Luke Nathan to just nine points.

The Marauders have a tough one against Marist this week, then head to the Jingle Bell Tournament at Paterson Kennedy, where the Marauders will face the host school in the first round.

Despite the early tough schedule of games, the Marauders intend on being around late in the season, like deep into the Hudson County Tournament once again and playing in the NJSIAA state tourney into March.

That would only be fitting with the Marauders, who appear ready for any challenge, thanks to their spirited coach.

“I like the makeup of this team,” Mirabel said. “I like our young leadership. We’ve all come together well. It should be an exciting season.”