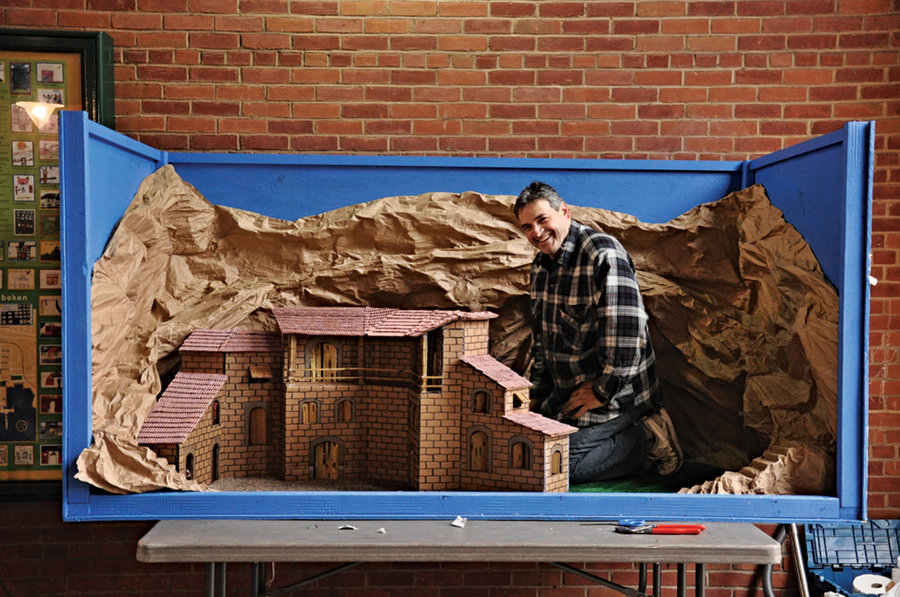 For more than two decades, resident Carmine Percontino has displayed a holiday scene outside his home at 827 Willow Ave.
Over the years, he has created three more placed around uptown Hoboken during December.
Two are outside 827 Willow Ave., one is outside 1032 Park Ave., and the newest addition is outside the Hoboken Historical Museum at 12th and Hudson streets.
The nativity scenes are also called presepios or crèches.
Percontino uses cardboard, brown paper bags, wood, figurines, tree branches, and rugs that look like grass or sand to create them.
“You have to use your imagination,” said Percontino. “You’ve got to ask yourself ‘How can I make this look more real and more intricate.’ It’s part of the fun, the creating aspect. It’s a lot of trial and error.”
The presepios take about two weeks to make from scratch, according to Percontino, who has worked seven or 10 hour days to complete them.
However, Percontino said he no longer starts from scratch each year.
“I did it from scratch every year,” said Percontino. “I’d take the box apart and take out all the figurines and houses and trees up until about eight years ago, when it became too much on my knees. As you get older you start to wear out.”
Now Percontino stores them and brings them out for about six to seven weeks from December to about Jan. 7.

The largest one outside his home is now on wheels as it weighs about 120 pounds.
“Even though I don’t completely rebuild them anymore, I add new details every year,” said Percontino. “I always put in new trees using actual tree branches and do touch-ups where it’s needed. If I get new figures, I add them in. So it is slightly different every year.”
Percontino said he almost lost the biggest display during Hurricane Sandy in 2012.

_____________
“I have been making them since I was a kid.” – Carmine Percontino
____________
“Sandy almost destroyed the whole thing,” said Percontino. “The basement of Seventh and Willow was pretty much full to the ceiling [with water.] Everything was completely turned around and the one thing that didn’t move was the presepio. I guess the weight of it kept it on the shelf. It was an amazing thing to see…somehow it survived it. It was like a miracle.”
Percontino, who has lived in Hoboken since his family immigrated here in 1965 when he was 10 months old, grew up with a rich family history and tradition of creating presepios.
“It’s a family tradition,” said Percontino. “I have been making them since I was a kid. I would do it in the house see them in uncle’s house and we always had them under the tree. I asked him to show me what he did to make them look that way.”
Over the years, the “dioramas” began taking up to much space.
“One year my mom asked me, ‘Why are you doing all this when only the family can see it,’ ” he said. “That put a light bulb in my head to move it outside for everyone to enjoy.”
The detailed displays, now encased in water proof plastic to protect them from the elements, depict what Percontino calls “Christmas villages” with inspiration drawn from his hometown of Monte San Giacomo Italy.
“The one outside the museum has cardboard houses with roofs that look like they are made from terracotta, like in Italy,” said Percontino.
Percontino said no one has ever vandalized or tried to damage the displays.
“People respect it for its meaning and appreciate it for what it’s for,” said Percontino. “Everyone has fond memories of Christmas and they don’t want to damage it.”

Percontino said the residents love it, especially the kids.
“They notice it a lot more than their parents,” said Percontino. “I remember once hearing a little girl say to her mom, ‘Gee mom I wish I was little, ‘ and the mom said she was little, and the girl said, ‘No I want to be little like that I want to go in there.’”
Percontino has used the displays to ask for donations for the homeless such as canned goods. He once had a podium requesting the donations, but it got destroyed in the flood. He said he hopes to make a new one for next year so he can go back to donating.
He said he also hopes to make more presepios for family and neighbors in Hoboken in the years to come, as he thinks he will be able to commit more time to it.
This year the Hoboken Historical Museum sent out about 1,000 chapbooks about Percontino’s story to its members, which recount his time growing up in Hoboken and his passion for presepios.
The chapbook is part of the museum’s “Vanishing Hoboken” series of the Hoboken Oral History Project overseen by Director Robert Foster and Editor Holly Metz.
According to Foster, the chapbook is available at the Hoboken Historical Museum for a $3 “modest donation.”
Marilyn Baer can be reached at marilynb@hudsonreporter.com.