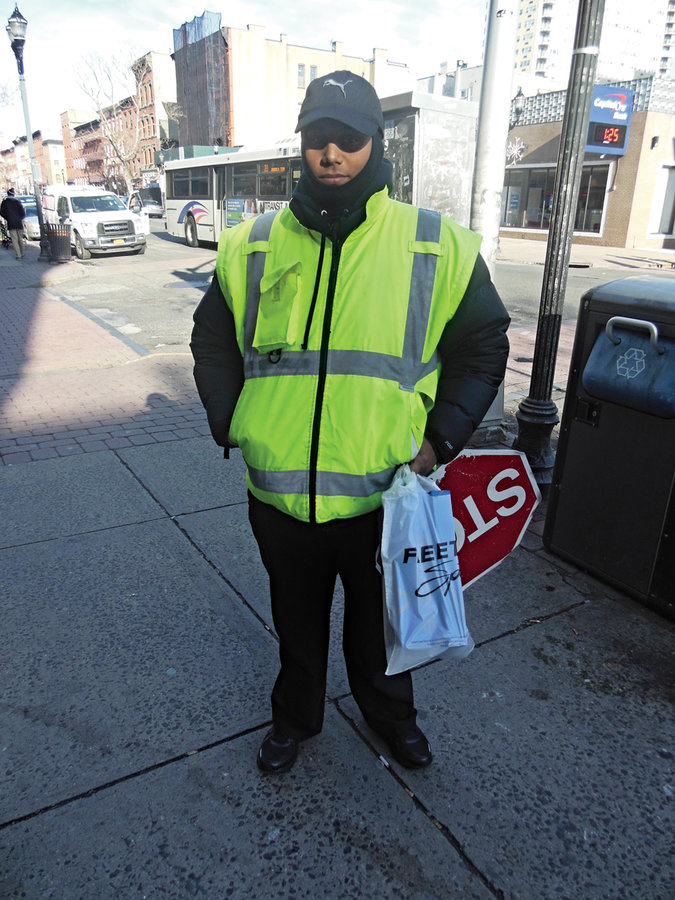 The city’s crossing guards get a uniform allowance of $700 annually. But some residents thought that it might help to supplement it for the winter, particularly where shoes are concerned.
Recently, Beth Buckley, a Hoboken resident since 2002, decided she wanted to give back and show her appreciation to Hoboken’s crossing guards after having a conversation with one of them outside her children’s school.
“We were just talking one day and she was telling me that she was on her feet so much and her back hurts and that all she wanted to do on her day off was relax and put her feet up,” said Buckley. “I remember thinking, when I’m on my feet all day and not wearing the proper shoes, my back hurts. I started thinking, I’m sure if she feels this way, then others are in the same situation. I couldn’t get it off my mind.”
Buckley said she knew she wanted to try and get Hoboken’s crossing guards proper shoes but wasn’t sure how to get it done. So she decided to recruit City Council President Jen Giattino.
“We happen to be watching our sons play soccer, and I know Jen can get things done,” said Buckley. “So I told her my idea and she thought it was great.”
“I suggested a Gofundme page to help raise the money,” said Giattino.
She spoke with Police Lt. John Petrosino, who oversees the crossing guards and traffic control officers (who direct the flow of traffic and can override stop signs and lights) to see if the shoes needed to be compliant with a specific uniform code and how many pairs they would need.
“Jen and I met to talk through everything, and we wanted to make sure we had someone set up proper shoes and work locally so they would be able to get fitted and pick them up,” said Buckley.
They decided the effort would be a surprise for the guards.

_____________
“Within 30 hours we had the money.”- Jen Giattino
____________
On their way to Fleet Feet on Sixth and Washington streets, the two took photos of crossing guards and their feet. Once at Fleet Feet, they spoke with Shawn Marlovits, the proprietor, who liked their idea and offered them a discount and “bundled in a nice pair of socks.”
“He was instrumental in making this happen,” said Buckley.
They launched the GoFundMe page on Nov. 22 at 10:45 a.m. and posted it on Facebook.
“Within 30 hours we had the money,” said Giattino.
The website raised almost $5,000.
“I was surprised,” said Buckley. “I couldn’t believe it. We had $10 donations up to $300 donations, which is great. People were no questions asked and just happy to donate.”
“It happened so quickly,” said Buckley. “I remember the timing of it because I was driving to Virginia for Thanksgiving break calling Jen and my family saying ‘Oh my gosh, someone just donated $30,’ and by the next day really we had all the donations.”
“It started this viral thing where physical therapists in town, they were willing to give checks to some crossing guards and someone else wanted to bake them cookies, it really sparked other ideas,” said Buckley.

The crossing guards and traffic control officers are allowed to spend the $700 annually how they see fit according to Petrosino.
He said “they can do whatever they want with the money. They are not restricted.”
He added that they must maintain their uniform, which they can purchase from wherever they see fit.
Crossing guards must have light blue shirts and dark colored pants while traffic control officers must have green shirts with dark pants according to Petrosino.
Giattino said that she knew they got an allowance and mentioned it to Buckley, but she added, “there is no reason we cant do something nice for them as residents.”
“Even though they get a uniform allowance, the salary is really pretty minimal,” said Petrosino. “It’s well under $20,000 [during the school year] and it’s tough to support themselves and a family on that type of salary and schedule. Because they work such odd hours, it can be hard for them to have a second job.”
“The uniform allowance is $700 a year broken up to $350 twice a year, but if they maintain their uniforms, [the amount] goes to their salary,” said Petrosino.
Petrosino said the crossing guards were a little nervous when their supervisors told them of the gift.
“At first they were a little nervous and wondered why people would do it,” said Petrosino. “They were a little skeptical.”
“I was definitely surprised,” said Crossing Guard Carlos Torres. “I was working and this lady who lives near where I work by the Catholic school at 7th and Monroe took my picture and said she was going to help but I kind of brushed it off.”
“Someone came up to me and told me my picture was on a GoFundMe page and I was worried I would get in trouble,” said Torres. “Because I know we get a uniform allowance.”
When asked if he was surprised that residents wanted to donate and support the crossing guards, Petrosino said, “No, I actually wasn’t… A lot of parents welcome crossing guards and know them by name and give them cards on their birthdays of gifts on Christmas. They are such a big part of the community.”
According to Giattino and Buckley, 27 crossing guards and traffic control officers have already picked up their shoes last week out of 43.
“I got fit last week and the shoes just came in so I picked them up today,” said Torres on Monday, Dec. 19. “I’m actually wearing them right now they are really comfortable.”
Buckley said she received a nice “thank you” card on Friday signed by several crossing guards.
“I get choked up thinking about it. A lot of people signed it.”
Marilyn Baer can be reached at marilynb@hudsonreporter.com.