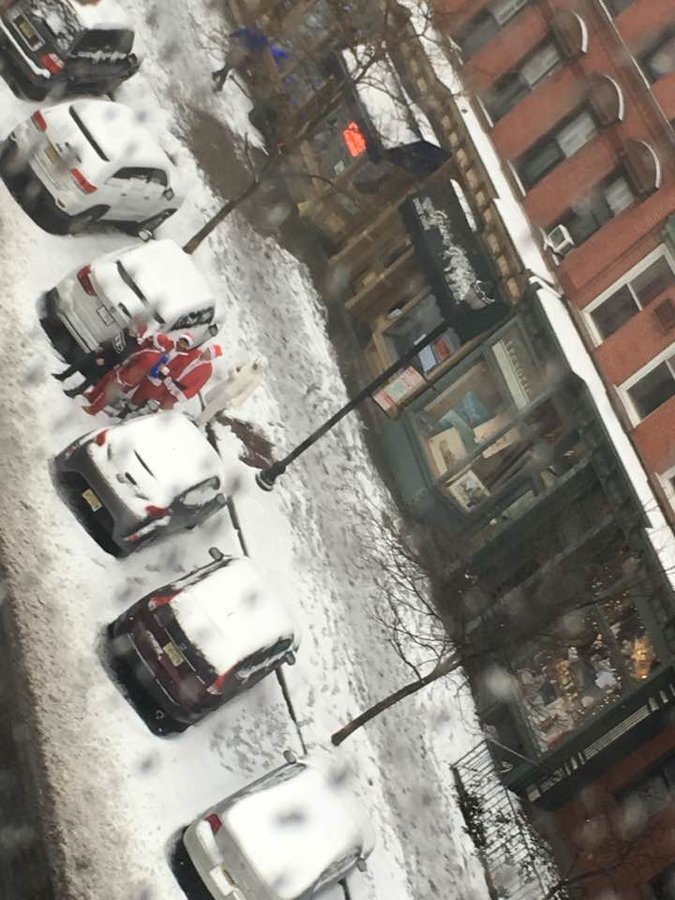 HOBOKEN — This year, police responded to 358 calls between 12 p.m. and 4 p.m. this past Saturday Dec. 17 during the “SantaCon” bar crawl in Hoboken, run by private organizers, according to a release from the police.

Police Chief Ken Ferrante tweeted about incidents throughout the day, including one post that stated that Santas were throwing snowballs from a rooftop. One snowball on Washington Street hit a city director, according to a Tweet, but Ferrante declined to say which director it was last week.

Ferrante said this year was better than last in terms of physical altercations.

“What I noticed that night was hardly any fights of physical bar brawls.” said Ferrante. “We saw more verbal incidents.”

Newark resident Melissa Mendiola, age 26, was charged with driving while intoxicated, reckless driving, and having an open container in a motor vehicle, police said.

Officer Luke Zeszotarski saw Mendiola’s vehicle allegedly almost strike a pedestrian attempting to cross the street. After stopping the vehicle near 70 Hudson St. the officer allegedly smelled alcohol from inside the vehicle. She was placed under arrest after allegedly failing to perform a field sobriety test properly. Zeszotarski found a bottle of Bacardi and another of tequila in Mendiola’s vehicle, the release said. Once at headquarters she allegedly had an alcohol level above the legal limit.

Yahia Fahmy, age 22, of Palisade Park was arrested for obstructing the administration of law and resisting arrest.

According to the media release police were called to respond to someone “acting disorderly” at a pizza place at First and Washington streets. Police spoke with the man in question and escorted him outside. He attempted to reenter. Officers attempted to issue a summons as the defendant allegedly “continued to intervene as they wrote the summons by not remaining at a safe distance away.”

The officers tried to keep him away when Fahmy allegedly grabbed Detective Nicholas Burke by the arm, pushed him, and fled the scene. He was pursued by Burke and arrested.

Ferrante wrote about the incident on twitter posting “Disorderly Santa refuses to give ID to P.O. to avoid summons,pushes the officer and takes off. Taken into custody after 3 block pursuit.”

Officers responded to a call at a bar at 70 Hudson St. on a report of someone attempting to cut the line to enter the establishment.

According to the release, Nelson was asked to leave and sent away. He later allegedly returned and began to argue with someone, then allegedly struck a planter, causing several chairs to fall, and left the scene.

Police were called to a pizza restaurant on a call of a man attempting to fight others. Officers arrived and were told Shah damaged the pizzeria’s window and fled the scene after arguing over service.

Police arrested Shah a short distance away and transported to headquarters for processing.