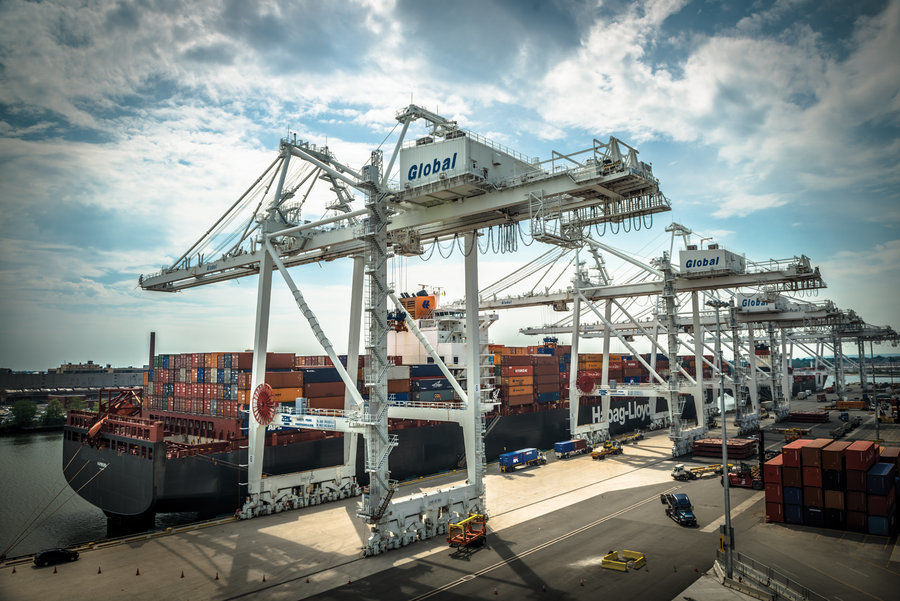 Global Container Terminals, Inc(GVT) and the Port Authority (PA) recently broke ground for the ExpressRail Port Jersey facility (“Greenville Yard”). The facility will be a major ship-to-rail port adjacent to the expanded, state-of-the-art GCT Bayonne container terminal. The project will complete the agency’s more than $600 million initiative that establishes direct access to on-dock or near-dock rail service for all of its major marine terminals.
Designed to complement the terminal’s big ship handling capabilities and quick transaction time, the intermodal yard will have an annual capacity of 250,000 container lifts. The facility – scheduled for completion in mid-2018 – will connect the Port of New York and New Jersey’s GCT Bayonne terminal to CSX and Norfolk Southern’s extensive rail network, reaching key inland markets. The facility will support the port’s continuously increasing number of rail lifts and higher percentage of East Coast market share.
Every container lifted to a rail car displaces the need for 1.5 truck trips, eliminating 375,000 trucks from highways annually and reducing carbon dioxide emissions by 18,300 tons annually.
Construction costs are supported by a $56 million investment from the Port Authority.

After voting to issue a $4.5 million bond last month, the council approved using $2.1 out of that bond for the purchase of Holy Family Academy on 237-239 Avenue A. The plan, also discussed at last month’s meeting, is to sell three properties currently housing the Bayonne Economic Opportunity Foundation (BEOF), which the council estimates will sell for around $2 million, to pay off the bond amount allocated for purchasing Holy Family.
“We will use that, the sale of the buildings, the proceeds…only to be used for paying off this bond,” said Council President Sharon Nadrowski. So in the end, it should be paid off before we even start paying interest and it will cost the city nothing in the end.”

New Jersey Governor Christopher Christie appeared on WFAN’s “Boomer and Carton” sport radio talk show on Tuesday, December 13, voicing his continued support for gaming in North Jersey, calling voters “dumb” for rejecting Public Question #1 in November’s election, effectively not allowing casinos in North Jersey.
John Coffey, the City Attorney for Bayonne and the mayor of Oceanport, the location of Monmouth Park Racetrack, called in to voice support for gaming in his community. “We’re getting eaten alive by other states,” said Coffey, arguing in favor of an alternative to the kinds of “internet gaming cafes” at tracks where customers can play online gambling games in designated spaces leased by casinos. The bill in the State Assembly would allow for this. Christie dismissed Coffey’s hopes for this bill. “It’s not going to happen, Jay,” said Christie, who supported gaming in North Jersey. “We just put a referendum on to have casino gaming in other parts of the state and it lost with 80 percent of the vote.”

The City of Bayonne received $900,013 in grants from the NJ Department of Environmental Protection (NJDEP) for expanded public access to the Newark Bay waterfront through the creation of 1,200 feet of walkways that will include recreational and educational opportunities, according to a press release from the NJDEP.
The project will include the creation of living shorelines, which use native vegetation and shellfish to naturally stabilize the banks of waterways. Part of the walkway will consist of an elevated boardwalk that will connect to a kayak access point and boat launch.
The grant is a part of $53 million in grants being awarded by the NJDEP to communities within the watershed of the lower Passaic River and the Newark Bay to improve public access and restore wetlands ecosystem. The grants are a result of a 2014 Natural Resource Damage settlement reached by the NJDEP and the NJ Attorney General’s Office with Occidental Chemical Corp., and others who discharged hazardous pollutants into the Passaic River. The settlements are in addition to the amount paid by private companies for remediating the pollution they caused.

Jersey City Medical Center and other RWJBarnabas Health programs located in Bayonne are teaming up with Advanced Towing of Bayonne to offer free road-side service through the end of December to senior citizens who live in the city. This is the third consecutive year this partnership will be helping the city’s seniors during the holiday season.
Free services for those 62 years of age or older includes lockout service, road side assistance for tire changes, emergency fuel delivery and emergency jumpstarts.
“We are a small company and we have a small advertising budget, but we want to help the community’s senior citizens in any way we can,” said Mark Borkowski, owner of Advanced Towing. “We get about two dozen calls each month for jumpstarts and people locked out of their cars, but with this program we have gotten numerous calls from people just calling to say thanks.”
Mark Rabson, Director of Public Affairs at Jersey City Medical Center, said the free service has really impacted on the dozens of Bayonne residents who have been helped over the past two holiday seasons.
“We’re pleased we can partner again with Advanced Towing in making a real difference in the lives of those people over 62 who must dread fixing a flat tire or trying to start a car in the cold weather,” said Rabson. “Whether you are holiday or food shopping, or even going to the doctor, the last thing you want to deal with is a car problem. We thank Advanced Towing for partnering with us.”
For the free service, contact Advance Towing directly at 201-437-6339.