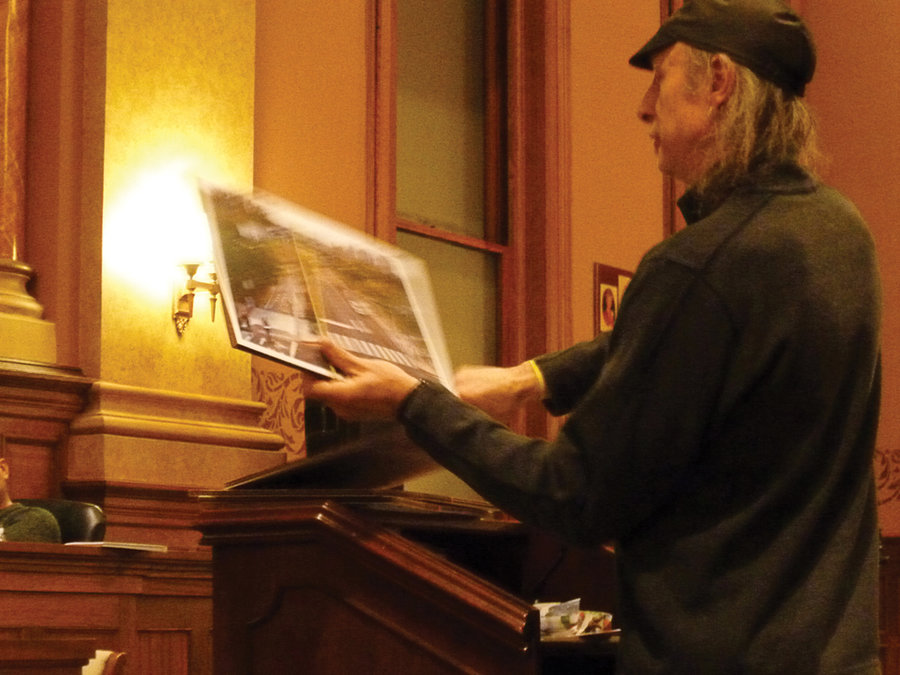 Even though downtown Grand Street is four lanes wide in some places, it’s still not safe enough for bicyclists, considering the large volume of cars traveling at high speed. At least, that’s according to members of Bike JC, who are among the local groups that have petitioned the city to make changes to the street as part of a bicycle safety initiative.
Bike JC members say Grand Street epitomizes the dangers bicyclists face in the city, and why many ride on sidewalks instead of the street. Very few experienced bicyclists ride on Grand Street, saying it simply is not worth the risk.
Motorists often reach speeds of 60 miles an hour trying to beat all the traffic lights between the Turnpike exit and the waterfront, making Grand Street nearly as dangerous for bicyclists and pedestrians as Kennedy Boulevard on the west side of Jersey City.
Members of Bike JC appeared at the Dec.12 City Council caucus and again in greater numbers at the regular meeting on Dec. 14 to present ideas for a redesign of Grand Street that would emulate some of the “road diet” changes along Observer Highway in Hoboken. There, narrowed car lanes and dedicated bicycles lanes have been created to improve safety for bike riders, pedestrians and even drivers of cars and trucks.

From four lanes to three

The nonprofit group’s proposal, dubbed Grand Street Vision, would implement a “road diet” on the busy street, reducing its four existing lanes to three. The middle lane would be a turning lane for cars. This would provide room for protected bike lanes.
This is an increasingly common redesign method proven to greatly improve safety for all road users – especially pedestrians – by calming motor traffic, reducing excessive speed and taming reckless driving.
The Grand Street plan would install physically separated, protected bike lanes, an idea increasingly common in New York and large cities but already in use in Hoboken, Newark, and other small and midsize cities, with construction underway in Secaucus. The design includes improvements like “bump outs” that would allow pedestrians more space and time to cross.
The Grand Street Vision plan would greatly improve connections for cyclists between the many diverse and distinct neighborhoods along Grand Street, from Bergen-Lafayette to Exchange Place, as well as the waterfront bike/walk pathway, and Liberty State Park, long a haven for both recreational and racing cyclists.
Exact designs and details of the plan have not been determined. Bike JC is trying to build community and government support for the concept.
Bike JC said Jersey City, considered one of the most bike-friendly communities in the state, is at risk of losing that reputation because of problems like Grand Street. While the city has installed some bike lanes, these are mostly on side streets, and are not protected or part of a cohesive network.
They argue that the very popular Citibike program in Jersey City that has been expanded since its inception in 2015 puts many more bike-riders on the streets but without safety improvements, so many of these riders are put at risk.

In arguing their case before council, JC Bikes said the intent is not to remove cars from streets, but to improve safety for all that are using the streets.
Patrick Conlon, a member of Bike JC said, he moved to Jersey City in 1991, and found that using his bicycle is a great way to travel.