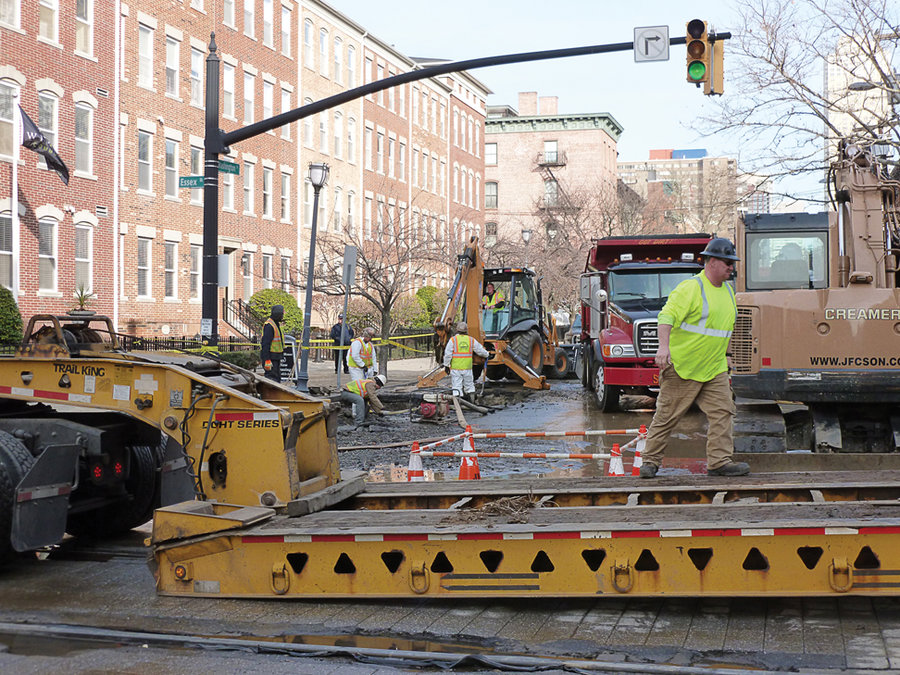 Kenneth Barnes, 19, of Jersey City, was charged on Dec. 13 with murder, attempted murder, two counts of aggravated assault, possession of a firearm for an unlawful purpose, and unlawful possession of a firearm in connection with the Sept. 11 murder of Shaheer Parson, 35, of Jersey City, and the wounding of three women. Barnes was arrested by detectives from the Hudson County Prosecutor’s Office Homicide and Gang Unit and is being held on $1 million cash bail.

Hudson County Assembly Democrats Annette Chaparro, Raj Mukherji, Nicholas Chiaravalloti, and Angela McKnight have sponsored a bill to help ensure the safety of bicyclists and pedestrians in New Jersey. The legislation was advanced Dec.12 by an Assembly committee.

The bill would require the curriculum for driver’s education courses in New Jersey to include information on sharing the road with pedestrians, bicyclists, skaters, and riders of motorized scooters and other non-motorized vehicles. The measure also would require the Motor Vehicle Commission to include bicycle and pedestrian safety as part of the written examination required to obtain a driver’s permit or basic driver’s license.

“I started seeing more people use bikes in my hometown of Hoboken, and so much of a driver’s education is focused on interactions a driver may have with other automobiles,” said Chaparro.  “But as we’re seeing with the introduction of more bike share programs, motorists have to share the road with many people who are walking or operating other types of vehicles on a regular basis. In order to keep New Jersey’s roadways safe for everyone, it’s critical that new drivers learn the correct way to interact with bicyclists, pedestrians and others who are not in automobiles.”

Nearly 5,000 pedestrians and 700 cyclists are killed annually in traffic accidents in the United States, according to the National Highway Traffic Safety Administration.

The measure was advanced by the Assembly Transportation and Independent Authorities Committee.

Port Imperial Ferry Corp., doing business as NY Waterway, has entered into an agreement to acquire Billybey Ferry Co., which owns 11 commuter ferries and the rights to operate on routes between Hoboken and Jersey City and Manhattan, NY Waterway President & Founder Arthur E. Imperatore announced in a letter to employees.

The combined NY Waterway fleet of 31 ferries and 80 buses is the largest privately-owned and operated commuter ferry network in the nation, serving a total of 20 trans-Hudson routes and carrying more than 30,000 passengers per day. The company began operations Dec. 3, 1986, and has about 400 employees today.

The combined entity is owned by Imperatore, his stepson Armand Pohan, who serves as chairman, Arthur E. Imperatore Jr. and other family members. Headquarters are in the Port Imperial Ferry Terminal in Weehawken.

City officials are struggling to explain why they are renting parking spaces in a former municipal parking lot near the Summit Avenue court house.

The city authorized the sale of the property last year with the provision that the developer would continue to provide court staff parking spaces on Academy Street for 13 months while the city scrambled to find parking spaces elsewhere.

But the city took too long to find alternatives and the agreement expired. The Jersey City Council proposed last seek to rent the spaces until the city could work out an agreement with a Newkirk Street property owner could be authorized.

The EDA board approved Wylei, Inc. for a $650,000 loan through the Edison Innovation VC Growth Fund. Wylei’s technology incorporates machine learning with AI to help corporations and marketers realize personalized communication at scale. The company offers a suite of products and services that leverage Wylei’s real-time predictive intelligence and adaptive content patented platform across all channels and devices.

Wylei’s technology is used by Fortune 500 companies such as Adidas, Epsilon, Experian, Marriott, Dell, Time Inc., and others.

Created to enhance support of early-stage businesses that have attracted funds through venture capital investors, the fund helps companies directly finance uses such as hiring key staff, product marketing, and sales by providing up to $1 million in subordinated convertible debt financing. Wylei intends to use the loan approved today for growth capital needs, including marketing and business development.

“As a bourgeoning technology hub with an active entrepreneurial spirit, Jersey City offers an array of opportunities for businesses of all sizes,” EDA Chief Executive Officer Melissa Orsen said. “We are thrilled that today’s action will support Wylei’s growth within the city’s already vibrant technology sector.”

Wylei, which opened its doors at the Jersey City location last month, plans to add 20 new jobs in the state within the next two years. When industry leader Meg Columbia-Walsh became Wylei’s CEO earlier this year, she relocated the company’s headquarters from Lancaster, Pa. to Jersey City and hired seven new employees. Columbia-Walsh, who has strong ties to New Jersey’s technology ecosystem, felt the state would provide a fantastic opportunity for her company’s growth and access to talent.

“Jersey City’s growth is a perfect match for an advanced AI technology start-up and to attract top talent to the state,” Columbia-Walsh said. “Our staff loves the area and our new offices are beautiful. We have had a ribbon cutting with Mayor Fulop and know this will be a perfect place to grow. Our AI platform is unrivaled and we look forward to our clients visiting the state as well.”

Also, recently, the EDA approved a Grow New Jersey (Grow NJ) award to encourage Noven Pharmaceuticals, Inc. to relocate its regulatory and clinical research team to Jersey City. The company, which is a subsidiary of Hisamitsu Pharmaceutical Co., specializes in the research development, manufacturing, marketing, and sales of prescription pharmaceutical products. The project would result in the creation of 30 new jobs for the State. Grow NJ is the state’s main job creation and retention incentive program.

After feedback from some council members and community members, Jersey City is going to extend the Ward F resume and application period through Jan. 7.

The city set up an email application in November seeking to fill the Ward F seat which will become vacant on Dec. 31 when current Ward F Councilwoman Diane Coleman assumes the elected office of County Register. Interested candidates should send a cover letter and their resume to: wardfcouncil@jcnj.org.

Interviews will be held with prospective candidates. The city is also asking Ward F community members and leaders to submit recommendations for qualified council candidates via the email address as community input will be heavily weighted.

Hudson County Prosecutor Esther Suarez announced that the enforcement of vehicular speed limits will continue to be the focus of Operation ‘Slow Down, Save Lives’ but that pedestrian traffic laws, such as jaywalking, will also be more strictly enforced along the roadways in Hudson County.

Local municipal police departments in conjunction with the Hudson County Sheriff’s Office and the prosecutor’s office have increased enforcement of all traffic safety laws since April when the ‘Slow Down, Save Lives’ initiative began.

Since April, more than 13,000 tickets have been issued by various police departments along John F. Kennedy Boulevard. Local municipal police departments from North Bergen, West New York, Union City, Jersey City and Bayonne will continue working with the Hudson County Sheriff’s Office and the prosecutor’s office to enforce laws and monitor progress into the foreseeable future.

“The message we want everyone to be aware of during the holidays is that if you break the law, expect a ticket,” said Suarez. “Our county continues to suffer from the loss of lives on our roadways and there has been little improvement by both drivers and pedestrians in obeying traffic safety laws. Pedestrians need to exercise better judgment before stepping off the sidewalk and drivers need to slow down and drive safely. Getting a ticket during the holidays may hurt financially, but it will hurt more for someone to spend the holiday in the hospital or far worse.”